LIVE ON CROWDCAST: JAMES SIE, SHAAN DASANI and ASH NICHOLS in conversation about ALL KINDS OF OTHER! 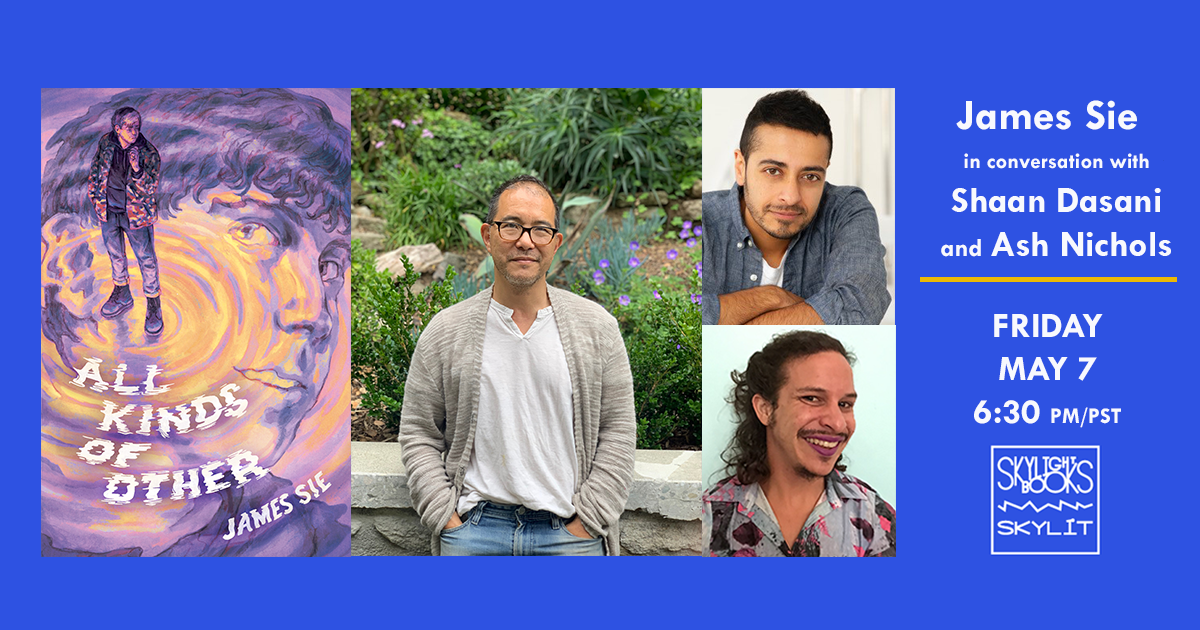 A discussion about All Kinds of Other

All Kinds of Other (Quill Tree Books)
“A touching, romantic, and rewarding read.” –Kirkus (starred review)

Both Jules and Jack have left behind their old lives to make fresh starts at a new school in Los Angeles. They meet, and there is an instant, unmistakable attraction. But when a video that links one of them to a pair of popular trans vloggers goes viral around school, their relationship is tested by the secret exposed, the unwelcome intrusion of friends and family, and their own fears and insecurities. Each boy must face a choice: play it safe and stay under the radar or embrace the truth—and their feelings for each other.

James Sie (pronouns he/him) is the author of All Kinds of Other and Still Life Las Vegas, which was a Lambda Literary Award nominee for Best Gay Fiction. He has contributed essays to The Rumpus and The Advocate. James is also a voiceover artist for many cartoons and games, including Stillwater, Jackie Chan Adventures, Kung Fu Panda: Legends of Awesomeness; Final Fantasy VII Remake, and Avatar: The Last Airbender, where his excessive love of cabbages has earned him immortal fame. Born in New Jersey to immigrant parents, James now lives in Los Angeles with his husband and son. Visit his website at www.sieworld.com.

Ash Nichols (they/them) is a queer non-binary trans human who spends their days gathering stories and facilitating other groups of humans. Ash currently works with Trans* Lounge, and is proud to be part of making workshops, groups and classes accessible to their community.

Shaan Dasani is a commercial, film and television actor and storyteller. As a South Asian transgender man, Shaan has shared his story at various events including entertainment industry panels, activist forums, and in college and high school settings, allowing his unique and personal narrative to help humanize a community whose rights are often under attack.

Fifty-two years ago, the Los Angeles LGBT Center made a commitment to build a world where LGBT people thrive as healthy, equal, and complete members of society. Since 1969, the Center has proudly cared for, championed, and celebrated LGBT individuals and families in Los Angeles and beyond. Today the Center's nearly 800 employees provide services for more LGBT people than any other organization in the world, offering programs, services, and global advocacy. The Los Angeles LGBT Center is an unstoppable force in the fight against bigotry and shines as a beacon for LGBT people everywhere. For more information, please visit  https://lalgbtcenter.org/.

All Kinds of Other (Hardcover)