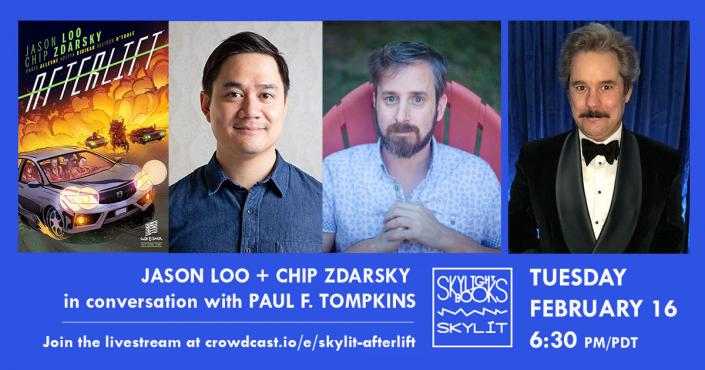 Ride-share driver Janice Chen has enough to deal with, from annoying passengers to overbearing parents.

But when she picks up a pair of mysterious passengers who are pursued by otherworldly forces, Janice realizes that her already-terrible day might be headed straight to hell. This Eisner Award-winning series from Chip Zdarsky ( Sex Criminals, Daredevil) and Jason Loo ( The Pitiful Human-Lizard) features car chases, demon bounty hunters, and figuring out your place in this world and the next.

Collects Afterlift #1-#5 along with all covers and a sketchbook section.

Jason Loo is a Toronto-based cartoonist and freelance illustrator. His latest work AFTERLIFT with writer Chip Zdarsky for Comixology Originals earned them an Eisner Award, as well as a nomination for a Harvey Award and a Joe Shuster Award. Jason is also the comic creator behind Toronto's own superhero the PITIFUL HUMAN-LIZARD. Created in 2014, the comic series follows a thirty-something office clerk who finds a more fulfilling purpose in his life as a (struggling) superhero. Other comic works by Jason include contributions to the TORONTO COMIC ANTHOLOGY (volume 3), KILL SHAKESPEARE (volume 5), and RAZORBLADES (issue 2-5). jasonloo.pb.online

Chip Zdarsky is the award-winning illustrator and co-creator of SEX CRIMINALS for Image Comics, and has written SPIDER-MAN: LIFE STORY, DAREDEVIL and HOWARD THE DUCK for Marvel Comics, and JUGHEAD for Archie Comics. He loves long walks in the park while listing his projects.

Paul F. Tompkins is a comedian, improvisor and actor. He co-hosts the Threedom podcast with Scott Aukerman & Lauren Lapkus and the Stay F. Homekins podcast with his wife, Janie Haddad Tompkins. For a full list of Mr. Tompkins’ stage, television and film credits, ask your teacher or a policeman.

Daredevil by Chip Zdarsky Vol. 2: No Devils, Only God (Paperback)