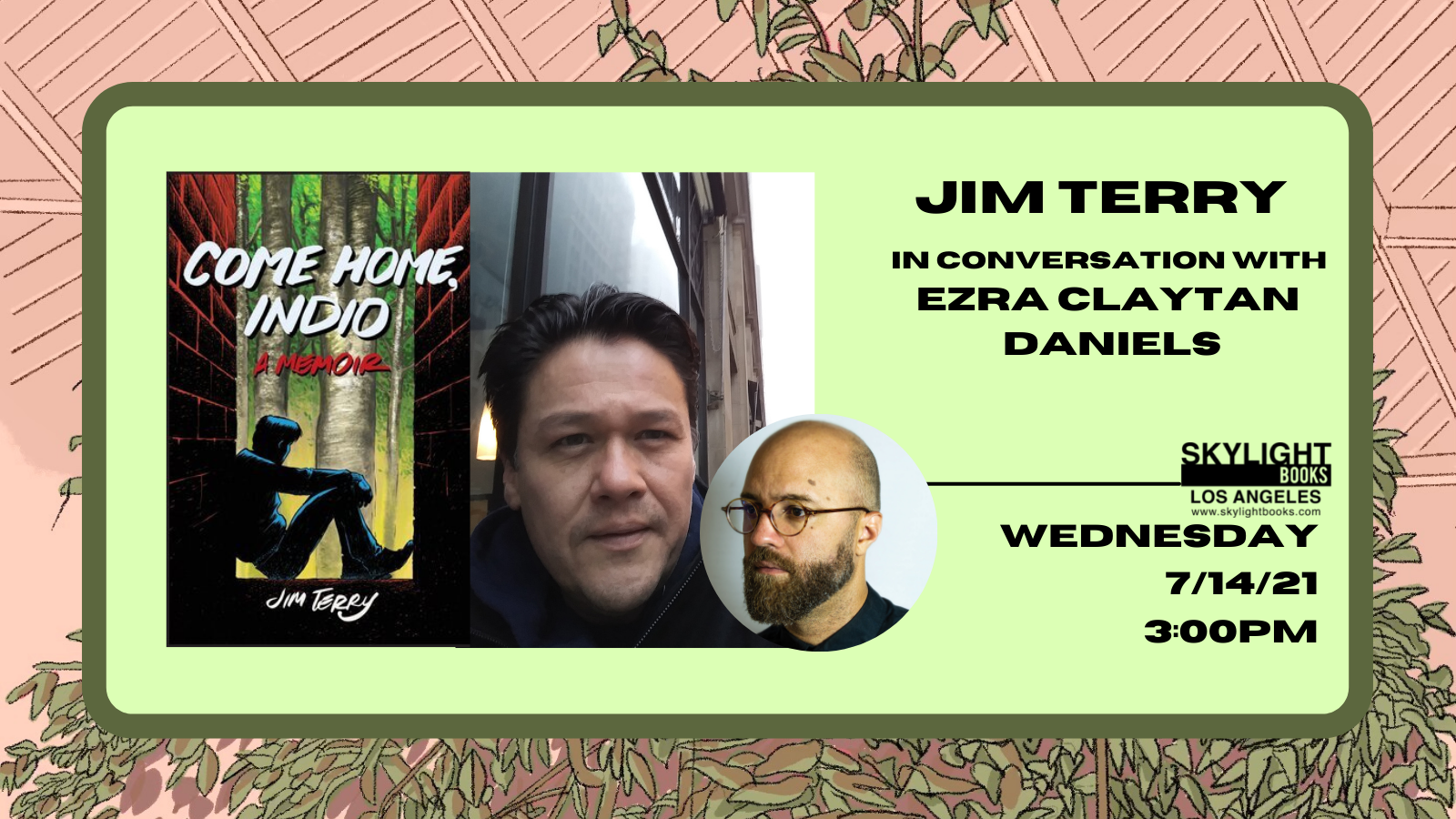 *Please note: This event will take place live on Crowdcast. RSVP here to join the livestream or watch the replay. This virtual event will be followed by an in-store signing later in the evening on Wednesday, July 14th at 6 PM PST. Click here for more information!

A Native American cartoonist explores the isolation and anxiety of being lost between two worlds but ultimate becoming comfortable in his own skin.

This powerful graphic novel shares the author’s journey of discovering his spiritual home as a Native American. From a childhood in suburbia, disconnected from his identity as an Indigenous person, through an urban adulthood marked by a struggle with alcoholism and the death of his parents, to his life-altering experience at Standing Rock, he begins to find a new sense of self as a Native and as an American.

Jim Terry was born in Southern California and grew up in the suburbs of Chicago. His mother was a Native American from the Ho-Chunk nation of Wisconsin, and his father was an Irish American jazz musician from Chicago. Jim is a prolific comic book artist who has worked on such comics as The Crow: Skinning the Wolves; Sundowners; Alice Cooper vs. Chaos; Vampirella and more. He travels the ComicCon circuit and has self-published several of his own comic books. Jim lives in Chicago. Come Home, Indio is his debut as an author.

Ezra Claytan Daniels is a mixed-race (black/white) multidisciplinary artist and creator of the award-winning graphic novels, Upgrade Soul and BTTM FDRS (with illustrator Ben Passmore). Ezra’s work has been featured on the Criterion Channel, at Chicago’s Museum of Contemporary Art, and is in the permanent collection of the Whitney Museum. Ezra currently resides in Los Angeles, where he writes for film and television, including Doom Patrol, based on the DC Comics series, for HBO Max.

Starred Review “Terry, known for his outstanding superhero illustrations, turns the lens inward in this brutally honest memoir. . . . An exceptionally well-told story with no easy answers but an ending that will inspire.”—Booklist. Sept 1, 2020

“You can’t really put it down, and not for the pain, which is there, but just his masterful ability to create comics out of a history of pain and searching for some sense of being, some sense of peace. . . . It’s a remarkable book. It really is. The cartooning is beautiful.”—Calvin Reid, Senior News Editor Publishers Weekly

“Both uplifting and gut-wrenching, beautiful and terrifying. Terry’s account of losing himself between worlds, and finding home in the balance between them, deserves a place among the all-time great graphic memoirs.” —Ezra Claytan Daniels, Author of Upgrade Soul and BTTM FDRS

“Illuminated by bursts of both joy and sorrow. With humbling sensitivity and candor, Jim shares with us his personal journey down emotionally complex paths towards home.” —Timothy Truman, Author of Marvel Comics’ Conan series

“Jim Terry lays it bare on the page. The emotional honesty of Terry’s drawings and his darkly comedic and intimate writing will break your heart and ignite your spirit.” —Devery Jacobs, actress and filmmaker