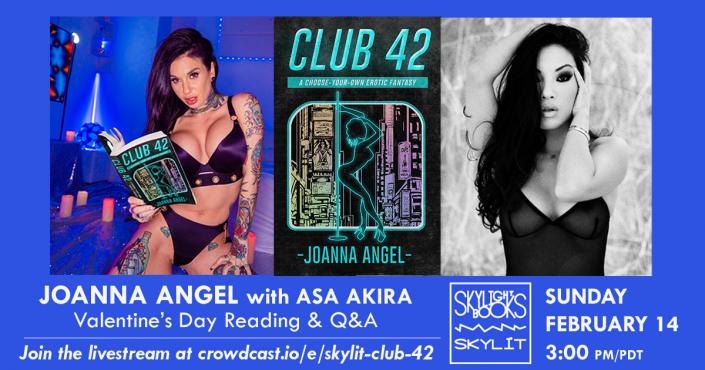 *Signed (bookplate) copies are available while supplies last! To request a signed copy, please write "signed copy" in the order comments at checkout.

Naomi, a proud Brooklyn hipster, finds her life is forever changed when she gets fired from her barista job and wanders into a strip club called Club 42. On a whim, Naomi auditions to become a dancer and what happens next . . . is up to you!

Join Naomi as she works the day shift at a Manhattan club where patrons sip on carrot juice instead of beer. From learning the art of the lap dance to giving her ex the “extras” in the VIP room, there’s more to learn here than she ever learned in college. Should she tell her partner—the dreamy, broke musician who is unofficially squatting in her apartment—about her job, or should she learn to lead a double life between two boroughs? Should she experiment with moonlighting as a Dominatrix, or stay in the strip club and submit to her newest crush, exploring her sexuality and her newfound love for exhibitionism as she twerks her way into a new tax bracket? It’s all up to YOU, so grab your stilettos, turn up the early-2000s dance hits, and guide Naomi through this nonstop naked adventure in the city that never sleeps!

"Like the city it takes place in, Club 42 is as much a tribute to a bygone era as it is a launching pad for something brand new.  Joanna doesn’t sugarcoat a thing (which shouldn’t surprise anyone familiar with her work). Sex sells, sometimes it feels good, sometimes it’s a chore. No matter what, it’s always an adventure."– Lina Misitzis, producer of the Pulitzer-winning NPR show, This American Life

"After giving an entire generation calluses with her films she has mastered sensual paper cuts of pleasure like a true sadist."– Chris Nieratko, Author of Skinema

"It was like I was a newbie stripper and learning all over again how to hustle, and the author's appetite for sex and money is intoxicating."– Elle Stanger - exotic dancer, writer, and certified sex educator

"A brilliant author who has an amazing sense of sexuality and mystery with everything she does and creates."– Buck Angel, transsexual activist, film actor, producer and public speaker

"Joanna Angel further cements her title as the new queen of literary erotica with Club 42; a labyrinth of thrilling, narrative choices, woven together with enviable skill!"– Colin McCracken, Features Writer at Hustler

Joanna Angel is an award-winning adult film star, director, producer, best selling author, and entrepreneur. She was the owner and founder of the venerated adult studio BurningAngel Entertainment, which she started in 2002 with just a few hundred dollars in her college dorm-room, and then sold to a major adult conglomerate in 2019. Pacific Standard magazine noted her as "one of the most powerful feminist icons in the adult industry." She's stormed mainstream media outlets with a mission to defy all stereotypes of sex workers by being a strong, educated, insightful, and powerful woman in adult film with well over 100 awards and accolades for her efforts both in front and behind the camera. She’s been featured in the New York Times, Forbes Magazine, LA Weekly, and on Vice TV and CNBC, to name a few. She was inducted into AVN's Hall of Fame in 2016, the XRCO Hall of Fame in 2017, and in 2012 was crowned a legendary “triple play” award by NightMoves magazine for her accolades as a director, performer, and exotic dancer.

Asa Akira is a Japanese-American actress who has appeared in over 300 adult films. Her many awards include AVN's Performer of the Year award in 2013. In addition to acting and writing, she hosts a regular podcast on sex and relationships and is the author of Insatiable: Porn—a Love Story and Dirty Thirty.