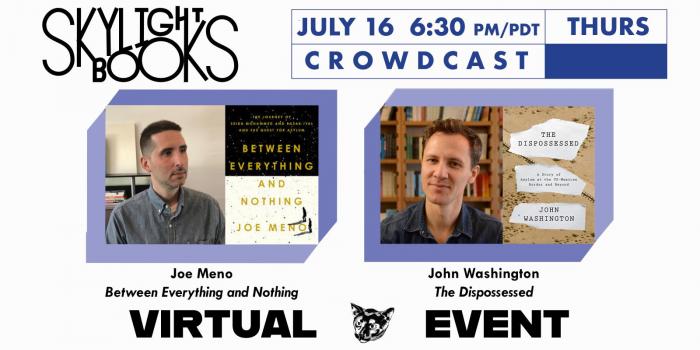 *Please note: This event will take place live on Crowdcast. RSVP here to save your seat!

Between Everything and Nothing: The Journey of Seidu Mohammed and Razak Ayal and the Quest for Asylum (Counterpoint)

“The most important book I’ve read in a long time” (Sigrid Nunez), this harrowing true story of two young men from Ghana and their quest for asylum highlights not only the unjust political system of their homeland, but the chaos of the United States’ failing immigration system.

Long before their chance meeting at a Minneapolis bus station, Ghanaian asylum seekers Seidu Mohammed and Razak Iyal had already crossed half the world in search of a new home. Seidu, who identifies as bisexual, lived under constant threat of exposure and violence in a country where same-sex acts are illegal. Razak’s life was also threatened after corrupt officials contrived to steal his rightful inheritance.

Forced to flee their homeland, both men embarked on separate odysseys through the dangerous jungles and bureaucracies of South, Central, and North America. Like generations of asylum seekers before, they presented themselves legally at the U.S. border, hoping for sanctuary. Instead they were imprisoned in private detention facilities, released only after their asylum pleas were denied. Fearful of returning to Ghana, Seidu and Razak saw no choice but to attempt one final border crossing. Their journey north to Canada in the harsh, unforgiving winter proved more tragic than anything they had experienced before.

Based on extensive interviews, Joe Meno’s intimate, novelistic account builds upon the international media attention Seidu and Razak’s story has already received, highlighting the harrowing journey of asylum seekers everywhere while adding dimension to one of the greatest humanitarian concerns facing the world.

Praise for Between Everything and Nothing:

"Meno vividly shows how migrants seeking refuge are inhumanely treated in many countries--disappeared into jails and detention centers, forced to pay bribes to law enforcement, left without recourse if they are robbed, and threatened with death." --Alexis Okeowo, The New York Times Book Review

JOE MENO is a fiction writer and journalist who lives in Chicago. He is the winner of the Nelson Algren Literary Award, a Pushcart Prize, and the Great Lakes Book Award and was a finalist for the Story Prize. The bestselling author of seven novels and two short story collections, including Marvel and a Wonder, The Boy Detective Fails, and Hairstyles of the Damned, he is a professor in the English and creative writing department at Columbia College Chicago. Find out more at joemeno.com.

The Dispossessed: A Story of Asylum at the U.S Border and Beyond (Verso)

The first comprehensive, in-depth book on the Trump administration’s assault on asylum protections.

Arnovis couldn’t stay in El Salvador. If he didn’t leave, a local gangster promised that his family would dress in mourning—that he would wake up with flies in his mouth. “It was like a bomb exploded in my life,” Arnovis said.

The Dispossessed tells the story of a twenty-four-year-old Salvadoran man, Arnovis, whose family’s search for safety shows how the United States—in concert with other Western nations—has gutted asylum protections for the world’s most vulnerable. Crisscrossing the border and Central America, John Washington traces one man’s quest for asylum. Arnovis is separated from his daughter by US Border Patrol agents and struggles to find security after being repeatedly deported to a gang-ruled community in El Salvador, traumatic experiences relayed by Washington with vivid intensity.

Adding historical, literary, and current political context to the discussion of migration today, Washington tells the history of asylum law and practice through ages to the present day. Packed with information and reflection, The Dispossessed is more than a human portrait of those who cross borders—it is an urgent and persuasive case for sharing the country we call home.

Praise for The Dispossessed:

In an era of massive and unprecedented human migration, John Washington documents in his poignant book, The Dispossessed: A Story of Asylum at the US-Mexico Border and Beyond, how the poverty and violence powerful nations inflict on poor countries is a major reason so many flee their lives and families. Offering expansive historical analysis of how ancient religions, cultures, and societies understood the imperative of welcoming the outsider, particularly those seeking safety from harm or death, and contrasting it with our current world order, Washington has written one of the most important books of our time on one of the most dire systematic injustices on our planet. I read this book in one sitting because I simply couldn’t put it down. —Jeremy Scahill

John Washington is a writer, translator, and activist. A regular contributor to The Nation magazine and The Intercept, he writes about immigration and border politics, as well as criminal justice, photography, and literature. Washington is an award winning translator, having translated Óscar Martinez, Anabel Hernández, and Sandra Rodriguez Nieto, among others. A long term volunteer with No More Deaths, he has been working with activist organizations in Mexico, California, Arizona, and New York for more than a decade. He is currently based in Brooklyn. Follow him on Twitter @jbwashing

The Dispossessed: A Story of Asylum and the US-Mexican Border and Beyond (Hardcover)

Between Everything and Nothing: The Journey of Seidu Mohammed and Razak Iyal and the Quest for Asylum (Hardcover)

Marvel and a Wonder (Paperback)

Demons in the Spring (Paperback)

The Great Perhaps: A Novel (Paperback)