LIVE ON CROWDCAST: JOSHUA FERRIS reads from A CALLING FOR CHARLIE BARNES 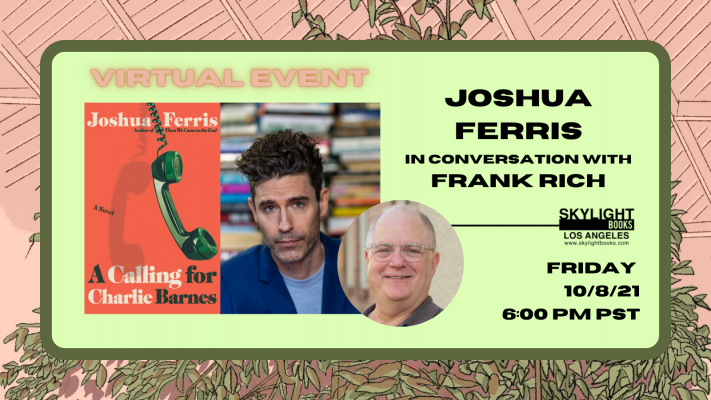 Register for the virtual event here.

A Calling for Charlie Barnes (Little, Brown and Company)

From a National Book Award Finalist comes a "compassionate" novel about a modern American family and a man on a secret mission to uncover the world's hidden truths—until his two lives come crashing together (Publishers Weekly, starred review).

Someone is telling the story of the life of Charlie Barnes, and it doesn't appear to be going well. Too often divorced, discontent with life's compromises and in a house he hates, this lifelong schemer and eternal romantic would like out of his present circumstances and into the American dream. But when the twin calamities of the Great Recession and a cancer scare come along to compound his troubles, his dreams dwindle further, and an infinite past full of forking paths quickly tapers to a black dot.

Then, against all odds, something goes right for a change: Charlie is granted a second act. With help from his storyteller son, he surveys the facts of his life and finds his true calling where he least expects it—in a sacrifice that redounds with selflessness and love—at last becoming the man his son always knew he could be.

A Calling for Charlie Barnes is a profound and tender portrait of a man whose desperate need to be loved is his downfall, and a brutally funny account of how that love is ultimately earned.

Joshua Ferris is the author of three previous novels, Then We Came to the End, The Unnamed and To Rise Again at a Decent Hour, and a collection of stories, The Dinner Party. He was a finalist for the National Book Award, winner of the Barnes and Noble Discover Award and the PEN/Hemingway Award, and was named one of The New Yorker's "20 Under 40" writers in 2010. To Rise Again at a Decent Hour won the Dylan Thomas Prize and was shortlisted for the Booker Prize. His short stories have appeared in The New Yorker, Granta, and Best American Short Stories. He lives in New York.

Praise for A Calling for Charlie Barnes:

“A compassionate, metafictional portrait of a flawed father and his crumbling notion of the American dream… The story is often quite funny and the themes at its core are those that will forever preoccupy humankind: purpose and death, but, mostly, love. Of Ferris’s work, this is the big kahuna.”—Publishers Weekly, starred review

"A deeply funny, very moving book about that most pivotal and permanent of destinations: death. Ferris's hijinks are serious; his play is profound. There is magic in these pages."—Ayad Akhtar, author of Homeland Elegies

“Charlie Barnes will go down as one of the great characters in contemporary literature, a man both bigger than life and smaller than his own aspirations, a feckless optimist with a gambler's heart. Joshua Ferris's sly, funny, unexpectedly moving novel is a wholly original take on family dysfunction, a clear-eyed look at the stories we tell ourselves about the people who made us.”—Jennifer Haigh, author of Heat and Light

“Brilliant, funny, heartbreaking--Ferris has taken the Updike-Roth model and set it spinning with masterly narrative fireworks. Family, memory, ambition and death, all told with dervishing glee. Not just a daredevil of a novel, but something truly new.”—Andrew Sean Greer, author of Less

"Joshua Ferris is one of our best writers, and A Calling for Charlie Barnes is wonderful: fast and deep, urgent and brilliant.  Ingeniously written, it had me up reading late into the night.   A hilarious, intimate, and scathing takedown of so many American vanities."—Dana Spiotta, author of Wayward

"A magnificent novel, one that keeps re-inventing itself as it goes: a master class both in technique and in emotional acuity. Ferris is pretty much peerless as a sentence-writer, and when he takes on father-son dynamics — the love, the grief, the worship, the anger — those sentences go in like daggers. Charlie Barnes clears the very high bar of being Ferris's best book.”—Jonathan Dee, author of The Privileges

“Dazzling. Mind-blowing. About as much fun as you can have without risking arrest.”—Richard Russo, author of Empire Falls and Chances Are…

"If Augie March was a “Columbus of the near-at-hand,” Charlie Barnes is a whole America: a dreaming, scheming paterfamilias forever “expanding out to the coasts” and outstripping whatever inconvenient facts or exuberant fictions might hope to contain him. Is he for real? Are any of us? This much is certain: Funny, moving, and formally a work of genius, A Calling for Charlie Barnes is quite literally the book Joshua Ferris was born to write."—Garth Risk Hallberg, author of City on Fire

“Like the best comedy, A Calling for Charlie Barnes has its fair share of angst. Death (or is it vanity?) hovers over a story of petty hustles and towering ambitions, all of it rendered with the comic ferocity that is Ferris's great gift. You could fill the back of a pickup truck with novels about sons trying to understand their father, but you'll not find another one as suave and daring as this one, warm and furious, and unfailingly funny.”—Scott Spencer, author of Endless Love

“With meticulous, wry prose and a dash of self-effacing metafiction, Joshua Ferris delves deeply into the simultaneously extraordinary and ordinary life of Charlie Barnes, a man with as much failure in him as found in our bankrupted country. This novel, about dentures and toupees and all the ways we disguise ourselves from our intimates, is at its large heart a moving portrait of a father and son to rival the best of Roth.”—Teddy Wayne, author of Apartment

A Calling for Charlie Barnes (Hardcover)