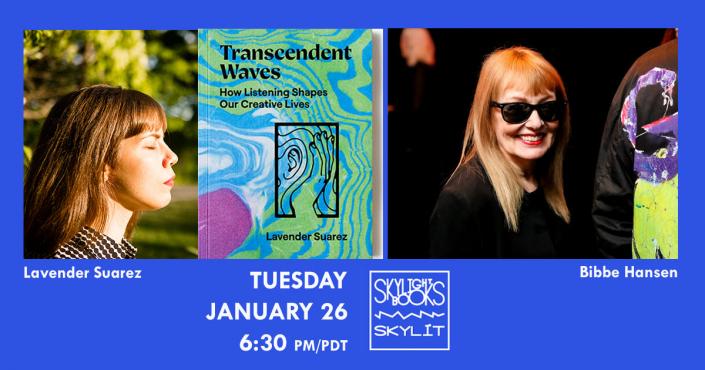 How can thoughtfully and intentionally listening to our world inspire our creative practices? What insights can we gain when we delve into the immersive world of sound, which permeates our every moment? In Transcendent Waves, sound healing practitioner, meditation teacher, and artist Lavender Suarez outlines how listening can unlock moments of creative spark, self-awareness, and mindfulness in a work that is equal parts how-to guide and contemplative artist’s workbook. Suarez’s illustrated meditations combine the open-ended freedom of Yoko Ono’s Grapefruit with the profound psychological insights of Oliver Sacks to offer a modern take on the impact of listening in a world that gets louder every day. Featuring an introduction by Bibbe Hansen—artist, Warhol star, and daughter of Fluxus cofounder Al Hansen—Transcendent Waves compiles scientific evidence, anecdotes, and thoughtful prompts for readers to manifest a sense of wonderment and appreciation for the intricacies of listening and the new perspectives it can bring to our daily creative worlds.

“If you’re new to the experimental world of sound healing and meditation, Transcendent Waves, the debut book from healing practitioner, meditation teacher, and artist Lavender Suarez, has arrived just in time for your new found exploration." --Audiofemme

“Suarez details an appreciation for something we, too often, take for granted. Transcendent Waves is a treatise for understanding and a work that deserves your attention." --Selective Memory

“A thoughtful, playful, and gently instructive book, it offers suggestions that nudge the reader toward a wider context for the sound in our lives." --Aquarium Drunkard

“We recommend this meditative book on listening for anyone in search of tranquility during this turbulent year." --Here Magazine

“Lavender ... transcends simple ideas of noise or new age, creating a form of “healing music” that feels more honest and invigorating on every level." --Bandcamp Daily

Lavender Suarez is a sound healing practitioner, meditation teacher, musician, and artist. She has hosted workshops and performed at numerous museums and artistic institutes including MoMA, the Guggenheim, the Whitney, the Hirshhorn Museum, and the Rubin Museum of Art, providing educational and meditative listening experiences. She performs and releases music under the name C. Lavender. Transcendent Waves is her first book.

Bibbe Hansen, born in New York City, 1953, to Fluxus artist Al Hansen and actress Audrey Hansen, began performing professionally at age eleven playing leading child and ingenue roles in prestigious east coast summer stock companies. In New York City, concurrently, she regularly performed in her father's avant-garde theater pieces called "Happenings" and participated in the presentations of his contemporaries at such historical venues as La Mama, Circle in the Square and Judson Church. After a stint as a delinquent street kid, runaway and truant she became a "guest" of the State of New York at the infamous Spofford Street Youth House and several other NY institutions for child criminals where she was able to refine her survival skills and work on her freestyle group dancing techniques. Directly following her release, Bibbe met Andy Warhol who suggested they collaborate on a film about her recent experiences. The film was called Prison and stars Bibbe Hansen, Marie Mencken and Edie Sedgwick. Bibbe also made three other films with Warhol and danced briefly with the Velvet Underground. A random late-60's sojourn brought Bibbe to Los Angeles where she founded a theater company, acted in "B" movies and participated in the local punk scene as musician, and documenteur. She is the mother of three wonderful children, Beck, Channing and Rain; a pop musician, fine artist and poet respectively. Today Bibbe creates artwork and is represented by Gracie Mansion Gallery in New York City. She recently completed the first draft of her memoirs and she lectures frequently on art and the creative process.