LIVE ON CROWDCAST: MADELEINE WATTS reads from her debut novel THE INLAND SEA, with AMINA CAIN 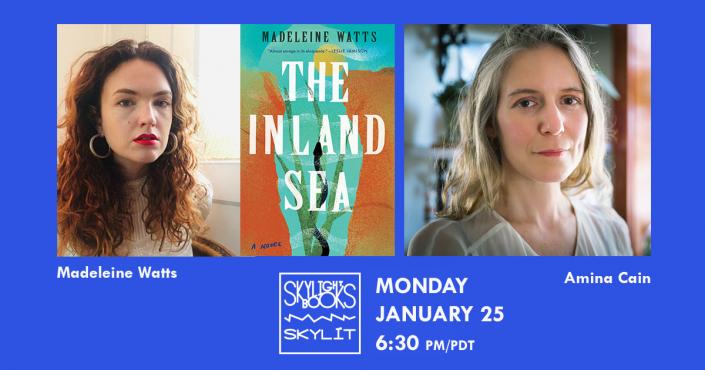 Drifting after her final year in college, a young writer begins working part-time as an emergency dispatch operator in Sydney. Over the course of an eight-hour shift, she is dropped into hundreds of crises, hearing only pieces of each. Callers report car accidents and violent spouses and homes caught up in flame.

The work becomes monotonous: answer, transfer, repeat. And yet the stress of listening to far-off disasters seeps into her personal life, and she begins walking home with keys in hand, ready to fight off men disappointed by what they find in neighboring bars. During her free time, she gets black-out drunk, hooks up with strangers, and navigates an affair with an ex-lover whose girlfriend is in their circle of friends.

Two centuries earlier, her great-great-great-great-grandfather--the British explorer John Oxley--traversed the wilderness of Australia in search of water. Oxley never found the inland sea, but the myth was taken up by other men, and over the years, search parties walked out into the desert, dying as they tried to find it.

Interweaving a woman's self-destructive unraveling with the gradual worsening of the climate crisis, The Inland Sea is charged with unflinching insight into our age of anxiety. At a time when wildfires have swept an entire continent, this novel asks what refuge and comfort looks like in a constant state of emergency.

Praise for The Inland Sea:

"The Inland Sea is a slow burn of a self-destructive woman struggling to make it through." ––Alma, A Favorite Book for Winter

"An unnamed protagonist watches Australia burn as her body burns along with it . . . People around her experience disasters, and she keeps herself outside. She goes through trauma, and she doesn’t know she’s the one screaming. Magnificently uncomfortable." ––Kirkus Reviews

"An eyecatcher in both premise and language, which is rough-and-tough, visceral, and absorbing." —Barbara Hoffert, Library Journal

"This is a coming-of-age novel fit for the crippling uncertainty of twenty-first-century young adulthood . . . The powerful metaphors, relatable negotiation for a satisfying livelihood, and ethereal setting make Watts’ debut a can’t-miss." ––Booklist

"Joins recent efforts like Richard Powers’s The Overstory and Jenny Offill’s Weather—two novels that have bent the genre norms of realism to ecocritical ends . . . The large crises of the novel are shot through with smaller pains—indignities and heartbreak and badly inserted IUDs that serve as micro indices for other kinds of harm . . . In carefully lining up climatological events and the banalities of breakups, The Inland Sea suggests that climate crisis may very well be representable within the generic containment of everyday life. First we just need to acknowledge that the anguish of an English tearoom and the anguish of geohistorical catastrophe might be happening simultaneously." –Molly MacVeagh, Los Angeles Review of Books

"Painfully beautiful, immersive, yet at its core a novel about a person's love of place, of home, family, and about how this home, mental and physical, has fallen into danger. Gripping." —Weike Wang, author of Chemistry

"Full of heart and disquiet, astute and precise, almost savage in its eloquence, illuminated about what it feels like to love, to be left, to want more." —Leslie Jamison, author of The Empathy Exams

"A tricky marvel: melancholy and bright, ingenious and gentle, an emergency inside of an idyll. Watts is an exceptional talent." —Rivka Galchen, author of Little Labours

"A sparking portrayal of dangerous thirst and unreachable interiors." —Josephine Rowe, author of Here Until August

"The Inland Sea is completely absorbing and sometimes disquieting, as much a search for the self as an imagined body of water in the middle of the desert. I savored this novel, reading it slowly over a couple of weeks, its airy and restless voice always in my head almost like a narcotic, but I could have read it in one night. Madeleine Watts is a startlingly good writer who holds nothing back." —Amina Cain, author of Indelicacy

Madeleine Watts grew up in Sydney, Australia and currently lives in New York. She has an MFA in creative writing from Columbia University, and her fiction has been published in The White Review and The Lifted Brow. Her novella, Afraid of Waking It was awarded the Griffith Review Novella Prize. Her non-fiction has appeared in The Believer, the Los Angeles Review of Books, and Literary Hub. The Inland Sea is her first novel.

Amina Memory Cain is the author of the novel Indelicacy, a New York Times Editors’ Choice and staff pick at the Paris Review, and two collections of short fiction, Creature and I Go To Some Hollow. Her writing has appeared in Granta, The Paris Review Daily, n+1, BOMB, the Believer Logger, and other places. She lives in Los Angeles.

The Inland Sea: A Novel (Paperback)