LIVE ON CROWDCAST: MERCEDES HELNWEIN launches her YA novel SLINGSHOT with COURTNEY SUMMERS 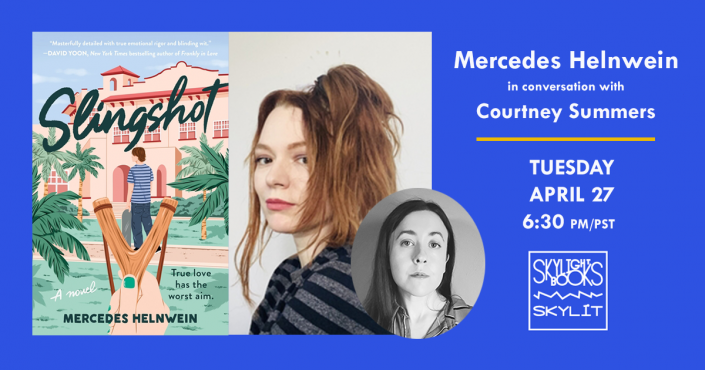 Grace Welles is stuck at a third-tier boarding school in the swamps of Florida, where her method of survival is a strict, self-imposed loneliness. And it works. Her crap attitude keeps people away because without friends, there are fewer to lose. But when she accidentally saves the new kid, Wade Scholfield, from being beaten up, everything about her precariously balanced loner world collapses and, in order to find her footing again, she has no choice but to discover a completely new way to exist. Because with Wade around, school rules are optional, weird is okay, and conversations about wormholes can lead to make-out sessions that disrupt any logical stream of thought. Nothing’s perfect, but that’s not the point. When they're together everything seems uncomplicated in a way that Grace knows is not possible.

So why does Grace crush Wade’s heart into a million pieces?

Acidly funny and compulsive readable, this debut is a story about two people finding each other and then screwing it all up. See also: soulmate, stupidity, sex, friendship, bad poetry, very bad decisions and all the indignities of being in love for the first time.

Mercedes Helnwein is a visual artist and writer. She was born in Vienna, Austria, and grew up in Germany, Ireland, and partially the US and the UK. Instead of going to college she moved to L.A. where she began putting on art shows with her friends and selling her drawings. Her obsession with writing began at age ten when she wrote her first short story for a school assignment – The Celery Stick Who Became President. She currently lives and works in L.A. and Ireland. Slingshot is her debut novel.

Courtney Summers is the bestselling and critically acclaimed author of several novels for young adults, including Cracked Up to Be, All the Rage and Sadie. Her work has been released to multiple starred reviews, received numerous awards and honors--including the Edgar Award, John Spray Mystery Award, Cybils Award and Odyssey Award--and has been recognized by many library, 'Best Of' and Readers' Choice lists. She lives and writes in Canada.

"Helnwein debuts in striking fashion... The writing, especially the dialogue, is magnetic, honest, and brimming with caustic wit... [an] enrapturing take on the intense highs and lows of teenage love." —Booklist (Starred Review)

"Wildly real and bursting with all the romance and pain of coming into oneself." —Kirkus (Starred Review)

"All the terror and wonder of that first true love, masterfully detailed with true emotional rigor and blinding wit. My fifteen-year-old self wants to scream into a pillow with joy." —David Yoon, New York Times bestselling author of Frankly in Love

The Project: A Novel (Hardcover)

Cracked Up to Be: A Novel (Paperback)