LIVE ON CROWDCAST: MEREDITH WESTGATE reads from and discusses THE SHIMMERING STATE with LYDIA KIESLING 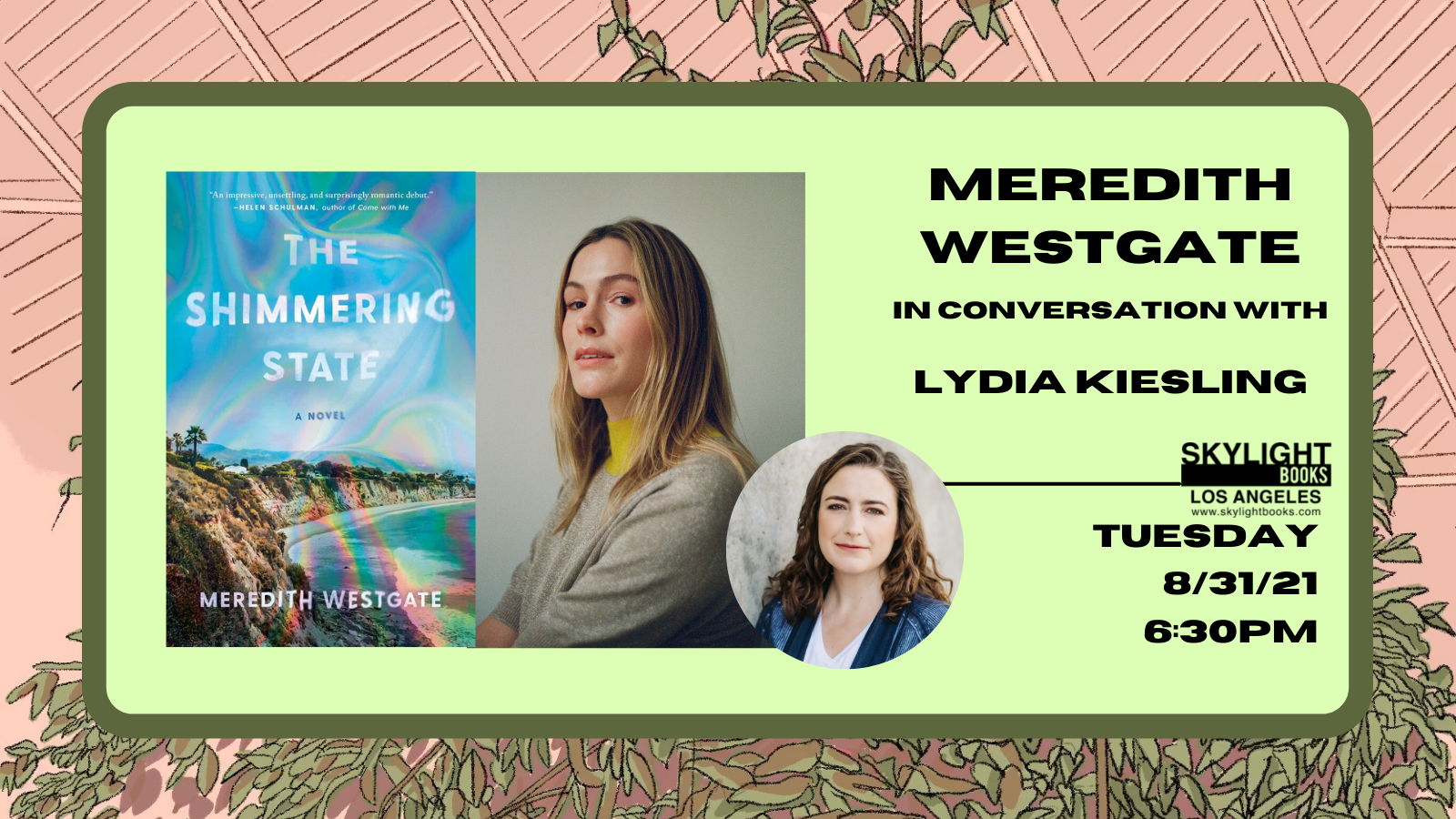 Lucien moves to Los Angeles to be with his grandmother as she undergoes an experimental memory treatment for Alzheimer’s using a new drug, Memoroxin. An emerging photographer, he’s also running from the sudden death of his mother, a well-known artist whose legacy haunts him even far from New York.

Sophie has just landed the lead in the upcoming performance of La Sylphide with the Los Angeles Ballet. She still waitresses during her off-hours at the Chateau Marmont, witnessing the recreational use of Memoroxin—or Mem—among the Hollywood elite.

When Lucien and Sophie meet at the Center, founded by the ambitious yet conflicted Dr. Angelica Sloane to treat patients who’ve abused Mem, they have no memory of how they got there—or why they feel so inexplicably drawn to one another. Is it attraction, or something they cannot remember from “before”?

Set in a city that seems to have no memory of its own, The Shimmering State is a graceful meditation on the power of story and its creation. It masterfully explores memory and how it can elude us, trap us, or even set us free.

Meredith Westgate (she/her) grew up in Lancaster, Pennsylvania. She is a graduate of Dartmouth College and holds an MFA in fiction from The New School. The Shimmering State is her first novel.

Lydia Kiesling is the author of The Golden State, a 2018 National Book Foundation “5 under 35” honoree, and a finalist for the VCU Cabell First Novelist Award. She is a contributing editor at The Millions and Zyzzyva and her writing has appeared at outlets including The New York Times, The New York Times Magazine, The New Yorker online, The Cut, and The Guardian.

Praise for The Shimmering State:

“Cinematic, dreamlike, at times brutal yet poignant.” —Frances Cha, author of If I Had Your Face

“Meredith Westgate has an extraordinary ear, not only for the stories we tell ourselves in order to live, but for the ways that we endlessly revise them to suit the new selves we continue to construct.” —Adam Wilson, author of Sensation Machines

"Who are we without our memories? Who might we be if we could relive someone else's? Meredith Westgate's captivating first novel wrestles with these existential questions without sacrificing her characters' distinctive and emotional essences. An impressive, unsettling, and surprisingly romantic debut." —Helen Schulman, author of Come With Me

“The Shimmering State is a slick, LA-set gel-cap, easily digestible, where memories and trauma are wiped away, though their imprints remain. At a rejuvenation center, a photographer and a dancer let their old selves go—every last unwanted memory—while out in the world, strangers’ memories are available for consumption in pill form. A classic tale of artists trying to make it in LA flipped on its head.” —Katie M. Flynn, author of The Companions

“Westgate’s novel does what the absolute best books do—it makes you experience the world so differently. Who are we? Are we our memories? And if so, how do we know what memories are true and what might be manipulated? Moving, astounding, and totally unsettling. But also, as fascinating as memory itself.” —Caroline Leavitt, New York Times bestselling author of Pictures of You and With or Without You

“The Shimmering State gives readers what its title promises: a shimmering, dreamlike experience of multiple lives that collide and repel through fate and coincidence. In this hypnotic novel, Westgate offers her characters, and her readers, a beautifully dystopian shot at redemption, and shows the lengths people will go to remember and to forget.” —Lydia Kiesling, author of The Golden State

"Stirring, lush, and thought-provoking, The Shimmering State is an entrancing novel about the losses that bind us and the memories that define us." —Elan Mastai, author of All Our Wrongs Today

The Shimmering State: A Novel (Hardcover)