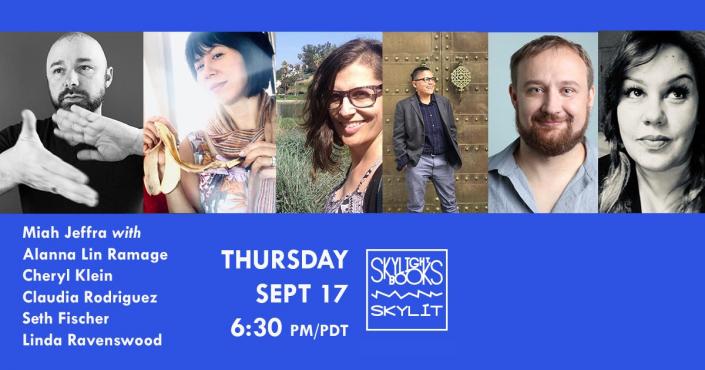 “A river’s edge, if approached too close, can sweep a body beyond itself.” In The Fabulous Ekphrastic Fantastic!, Miah Jeffra perfects apostrophe as canticle, a host of heroes beckoning the reader deeper into the waters of selfhood, Madonna, Mary Shelley, Felix Gonzalez Torres, Plato, and Jeffra’s mother among them. Jeffra explores the nature of gender, sexuality, aesthetics, and love, taking a tiny hammer to the stability of the limits of perception, troubling the tether between perception and memory. At once memoir and cultural criticism, this collection discovers itself as a book about forgiveness, family, and the truths we find in “the lightness of a door,” “the probability of a radio,” the long line between one story and another.

Praise for The Fabulous Ekphrastic Fantastic!:

“Miah Jeffra writes somewhere between a scream and a growl, in short energetic essays that queer the language in exciting ways. In a letter to the late Keith Haring, Jeffra writes ‘I want to feel like a bandit, a punk, a renegade.’ And indeed he takes us on an outlaw's journey, provocateur and picador; flaunt and flirt. Here is a writer who grabs the reader by the balls in all the ways one hopes to be testicularly taken.”
— D.A. Powell, author of Useless Landscape, or A Guide for Boys

“Both tough and tender, sometimes laugh-out-loud funny and other times direly serious, Miah Jeffra flips the script in these essays on art, danger, seduction and sexuality. Moving between critical, narrative, lyrical modes Jeffra illuminates and entertains. I loved this book.”
— Kazim Ali, author of The Secret Room: A String Quartet

Miah Jeffra is one of the most interesting writers working today and their new book, The Fabulous Ekphrastic Fantastic!, is among the most unique you’re likely to pick up this—or any—year. I could describe the book as part memoir, part criticism—but that wouldn’t do justice to the electric, eclectic way Jeffra straddles and subverts
genres. Instead, I’ll suggest this: go and read the book and see for yourself. You’ll be happy you did.
— Chanan Tigay, author of The Lost Book of Moses: The Hunt for the World’s Oldest Bible

“Miah Jeffra is that rare writer who’s as committed to the individual sentence as much as they are to developing a bold, animated vision. These short pieces are nothing less than an ongoing art of survival, and they’re irresistible in their force, innovation, and vulnerability.”
— Paul Lisicky, author of The Later: My Life at the Edge of the World

Miah Jeffra is author of The First Church of What's Happening (Nomadic 2017), The Fabulous Ekphrastic Fantastic! (Sibling Rivalry 2020), The Violence Almanac (Black Lawrence 2021), and co-editor, with Arisa White and Monique Mero, of the anthology Home is Where You Queer Your Heart (Foglifter 2020). Awards include the New Millennium Prize, the Sidney Lanier Fiction Prize, and 2019 finalist for the Lambda Literary Award for Outstanding Anthology. Miah is founding editor of queer literary collaborative, Foglifter Press.

Fascinoma is a folk-pop / alt-rock performance art ensemble fronted by Alanna Lin Ramage and supported by a diverse stable of talented geezerhozen.  Based in Los Angeles, though hailing from the smoky backwaters of Cleveland, OH, Ramage captivates audiences with soothing vocals, humor, poetry, and just enough performance art to keep things interesting.

Cheryl Klein is the author of the books Lilac Mines (Manic D Press) and The Commuters (City Works Press), and Hold It Lightly, a monthly column for MUTHA Magazine. Her stories and essays have appeared in The Normal School, Foglifter, Blunderbuss, and other publications and anthologies. Her work has been honored by the MacDowell Colony and the Center for Cultural Innovation. By day she works in development for the nonprofit youth writing organization 826LA. She lives with her family in Los Angeles.

Claudia Rodriguez is a community scholar, educator, creative writer and performer from Compton. She published her first collection of poetry Everybody’s Bread in 2015 with Korima Press, which was a finalist for the Lambda Literary Award. For the past twenty years, she has developed work for/about and with marginalized communities.

Seth Fischer’s writing has been listed twice in The Best American Essays and been nominated for The Pushcart Prize by several publications, including Guernica. He has also published pieces at Buzzfeed, Joyland, and elsewhere, and he was the founding Sunday Editor at The Rumpus and is the current nonfiction editor at The Nervous Breakdown. He teaches at the Writer’s Program at UCLA-Extension and Antioch University Los Angeles, where he received his MFA.

Linda Ravenswood is a Poet and Performance artist from Los Angeles. SHe is NDN / First Nation, (Pokanoket, Wampanoag) and a Mayflower descendant on her mother’s side, and an Indigenous Mestizaje from Baja California Sur on her father’s side. Her work aims towards inquiry and uncovering, holding memory, history, place and lineage as meaningful, and available markers. She was shortlisted for Poet Laureate of Los Angeles, 2017.

The Commuters: A Novel of Intersections (Paperback)