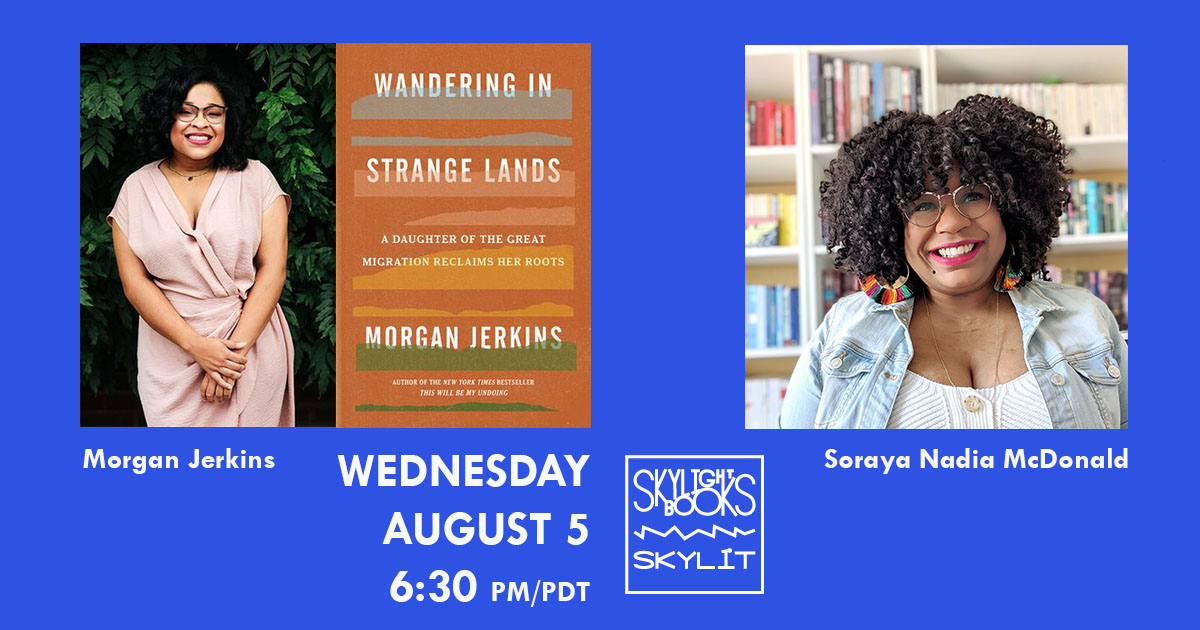 Named one of the most anticipated books of the year by ELLE, Buzzfeed, Esquire, Bitch Media, Good Housekeeping, Electric Literature, Parade and BookRiot

“One of the smartest young writers of her generation.”—Book Riot

From the acclaimed cultural critic and New York Times bestselling author of This Will Be My Undoing—a writer whom Roxane Gay has hailed as “a force to be reckoned with”—comes this powerful story of her journey to understand her northern and southern roots, the Great Migration, and the displacement of black people across America.

Between 1916 and 1970, six million black Americans left their rural homes in the South for jobs in cities in the North, West, and Midwest in a movement known as The Great Migration. But while this event transformed the complexion of America and provided black people with new economic opportunities, it also disconnected them from their roots, their land, and their sense of identity, argues Morgan Jerkins. In this fascinating and deeply personal exploration, she recreates her ancestors’ journeys across America, following the migratory routes they took from Georgia and South Carolina to Louisiana, Oklahoma, and California.

Following in their footsteps, Jerkins seeks to understand not only her own past, but the lineage of an entire group of people who have been displaced, disenfranchised, and disrespected throughout our history. Through interviews, photos, and hundreds of pages of transcription, Jerkins braids the loose threads of her family’s oral histories, which she was able to trace back 300 years, with the insights and recollections of black people she met along the way—the tissue of black myths, customs, and blood that connect the bones of American history.

Incisive and illuminating, Wandering in Strange Lands is a timely and enthralling look at America’s past and present, one family’s legacy, and a young black woman’s life, filtered through her sharp and curious eyes.

Praise for Wandering in Strange Lands:

"Traveling throughout the country, [Jerkins] explores the path her family took as well as her cultural identity as a black woman. Her desire to understand both her personal and cultural origins will inspire you to do the same."- ELLE

"For fans of “The 1619 Project,” The New York Times Magazine’s series that recently reexamined the legacy of slavery in the United States, this book is an interesting companion piece. For a long time, Jerkins’ family chose to look forward, not back. But what she found when she finally did retrace their steps was her true self. It had not been forgotten; it was just waiting to be discovered."- Bust Magazine

“A thrilling, emotional, and engaging ride that almost commands the reader to turn the page, Wandering in Strange Lands is required reading, accurately widening the lens of American history.”- Booklist (starred review)

"A blend of reportage and memoir, this is just one story of many of this time—and one not to miss when it comes out."- Book Riot

“[A] forthright and informative account. . . . Jerkins’s careful research and revelatory conversations with historians, activists, and genealogists result in a disturbing yet ultimately empowering chronicle of the African-American experience. Readers will be moved by this brave and inquisitive book.” - Publishers Weekly

“Driven by a need to understand her own identity, cultural critic Jerkins mounted an investigation into her family's tangled history, recounting in this candid memoir the surprising discoveries that emerged from her emotional journey. . . A revelatory exploration of the meaning of blackness.”- Kirkus Reviews

"Wandering in Strange Lands intertwines segments of past and present travel, as a reminder that the past is present in the U.S."- O, the Oprah Magazine

Morgan Jerkins is the New York Times bestselling author of This Will Be My Undoing. She is a Senior Editor at Zora Magazine a division of Medium, whose work has been featured in The New Yorker, Vogue, the New York Times, The Atlantic, Elle, Rolling Stone, Lenny, and BuzzFeed, among many others. She lives in New York.

Soraya Nadia McDonald is the award-winning cultural critic for The Undefeated, ESPN’s premiere platform covering race, sports, and culture. She writes about film, television, and the arts. She is the 2020 winner of the George Jean Nathan prize for dramatic criticism, a 2020 finalist for the Pulitzer Prize in criticism, and the runner-up for the 2019 Vernon Jarrett Medal for outstanding reporting on black life.

Soraya is a contributing editor for Film Comment and has contributed criticism to Fresh Air with Terry Gross. Her essay “‘Believe Me’ Means  Believing That Black Women Are People” was published in the 2020 anthology Believe Me: How Trusting Women Can Change the World. Soraya’s heroes are Toni Morrison, Dorothy Parker, Lorraine Hansberry, Pauline Kael, James Baldwin, Gloria Steinem, and her late aunt, Cornelia McDonald — writers who excelled at telling the truth about art and society with wit, verve, passion, and purpose.

Soraya was a 2018 Eugene O’Neill National Critics Institute fellow and she is a member of the New York Drama Critics’ Circle, New York Outer Critics Circle, Television Critics Association, and American Theatre Critics Association. Before joining The Undefeated in 2016, she covered pop culture for the Washington Post, where she focused on issues surrounding race, gender, and sexuality. She will happily obsess about anything from themes of American imperialism in Black Panther and Watchmen, to why Noma Dumezweni should be the next Doctor Who, to the best episodes of Bob’s Burgers.

Wandering in Strange Lands: A Daughter of the Great Migration Reclaims Her Roots (Hardcover)

This Will Be My Undoing: Living at the Intersection of Black, Female, and Feminist in (White) America (Paperback)