LIVE ON CROWDCAST: NIKITA LALWANI + TESSA HADLEY in conversation about YOU PEOPLE 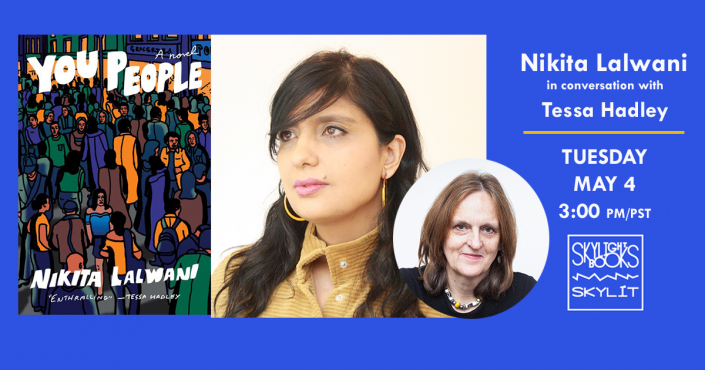 From the outside, Pizzeria Vesuvio seems just like any other pizza place in London: a buzzy, cheerful Italian spot where cooks from Sri Lanka rub shoulders with waitstaff from Spain, Georgia, Wales, Poland, and more. Overseeing them is Tuli, the mysterious and deeply compassionate proprietor. In a harsh world, Tuli has created a haven for the lost and marginalized. Upstairs, on the battered leather sofas, he pulls strings and changes lives — often illegally — arranging money, legal aid, and safe passage for people in the community. But even Tuli can’t hold  back the forces which threaten the island of safety he’s created.

Nikita Lalwani beautifully describes the inner worlds of her characters and captures the tender, intimate exchanges between them. In doing so, You People poses profound questions: should we break the law if we feel it to be unjust? Should we help someone even if they have wronged others? Is it possible to move away from hate and towards love.

Praise for YOU PEOPLE

“An opening onto a  vivid world, whole in itself, not like anything else, fascinating, and so beauti fully done, with fresh, alive perceptions and  reactions, a tenderness towards people.” —Tessa Hadley

“A deeply compassionate novel. You People alerts us, in these dark times, to the possibility of human nobility.”  —Pankaj Mishra, Bland Fanatics

“A tale that gives voice to the marginalized, the undocumented, the trafficked.” —Devi Laskar, Atlas of the Reds and Blues

"The descriptions of immigrant issues are powerful, and so is Lalwani's deep immersion in restaurant life: the gossip, the personalities among regulars and staff, and the surrogate family dynamics. Lalwani's story surges with passion, intrigue, and a rigorous eye toward British immigration policy."—Publishers Weekly

Nikita Lalwani is a contemporary British novelist of  Indian origin whose work has been translated into sixteen  languages. Her first novel, GIFTED (2007) – the story  of a child prodigy of Indian origin growing up in Wales  – was long-listed for the Man Booker Prize, shortlisted  for the Costa First Novel Award and won the inaugu ral Desmond Elliott Prize for Fiction. Her second, THE  VILLAGE (2012), was modelled on a real-life ‘prison  village’ in northern India, and won a Jerwood Fiction  Uncovered Prize. Nikita contributed to RESIST: Stories of Uprising (2020) and wrote the opening essay for AIDS  SUTRA (2008), an anthology exploring the lives of people  living with HIV/AIDS in India. She is a trustee of the UK  human rights organization LIBERTY.

Tessa Hadley has written seven novels - including The London Train, The Past, and Late in the Day - and three collections of short stories. She publishes short stories regularly in the New Yorker, and reviews for the Guardian and the London Review of Books; she was awarded a Windham Campbell prize for Fiction and the Hawthornden Prize in 2016, and the Edge Hill Prize in 2018.

Late in the Day: A Novel (Hardcover)

Bad Dreams and Other Stories (Paperback)

The Past: A Novel (Paperback)