LIVE ON CROWDCAST: No Icon In Another World: A Conversation between ISABELLE GRAW and KIM GORDON 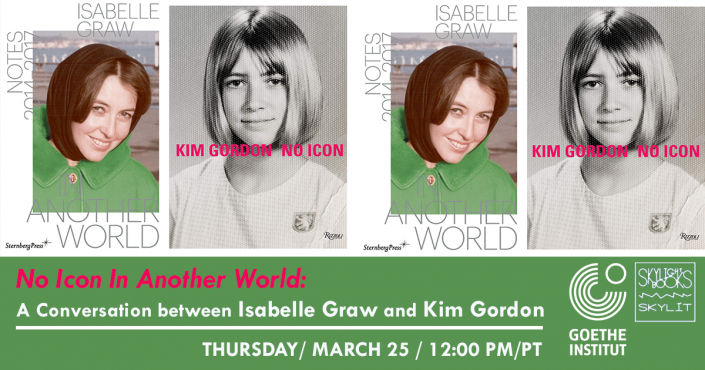 Register here to join the webinar or watch the livestream on Facebook here.

Presented by the Goethe-Institut Los Angeles and Skylight Books, in cooperation with Sternberg Press

Both books are available to purchase through Skylight Books.

This online event brings together long-time acquaintances Kim Gordon (artist, author, and co-founding member of the band Sonic Youth) and Isabelle Graw (art historian and publisher of the journal Texte zur Kunst) for a discussion of how their new respective publications relate to their current interests and past projects.

While taking different approaches to the form of the memoir, both books touch on similar themes, especially the role of art—writing, painting, music—in processing loss and abrupt change as well as overcoming deeply rooted patterns.

The authors will reflect on capturing the social dimension of personal experience in writing without losing its emotional specificity.

This personally curated scrapbook is an edgy and evocative portrait of Gordon’s life, art, and style, spanning her childhood on Californian surf beaches in the ’60s and ’70s to New York’s downtown art and music scene in the ’80s and ’90s where Sonic Youth was born. Through unpublished personal photographs, magazine and newspaper clippings, fashion editorials, and advertising campaigns, interspersed with Gordon’s song lyrics, writings, artworks, private objects, and ephemera, this book demonstrates how Kim Gordon has been a role model for generations of women and men.

Merging memoir and social criticism in an original fashion, Isabelle Graw lays hold of all the experiences and thoughts that don’t flow into her art-historical texts. In elegantly written miniatures, Graw captures radical political, social, and cultural changes that occurred between 2014 and 2017, analyzing how these macro-shifts reach into her own life. She addresses topics ranging from the general turn to the political right, as seen in Brexit and Trump, to #MeToo, men with beards, and Balenciaga.

Kim Gordon is an American musician, singer, songwriter, visual artist, and actress. She was the bassist, guitarist, and vocalist in the alternative rock band Sonic Youth. Her autobiographical memoir, Girl in a Band, 2015, is a New York Times best seller. She is represented by 303 Gallery in New York City and has had solo shows at the Andy Warhol Museum in Pittsburgh and the Irish Museum of Modern Art in Dublin.

Isabelle Graw is the publisher of the journal Texte zur Kunst, which she cofounded with Stefan Germer in 1990, and professor of art history and art theory at the Hochschule für Bildende Künste – Städelschule, Frankfurt am Main. Her previous books include The Love of Painting: Genealogy of a Success Medium (2018), High Price: Art Between the Market and Celebrity Culture (2010), and Die bessere Hälfte: Künstlerinnen des 20. und 21. Jahrhunderts (2003). Graw lives in Berlin.

Painting beyond Itself: The Medium in the Post-Medium Condition (Sternberg Press / Institut für Kunstkritik series) (Paperback)

The Love of Painting: Genealogy of a Success Medium (Paperback)