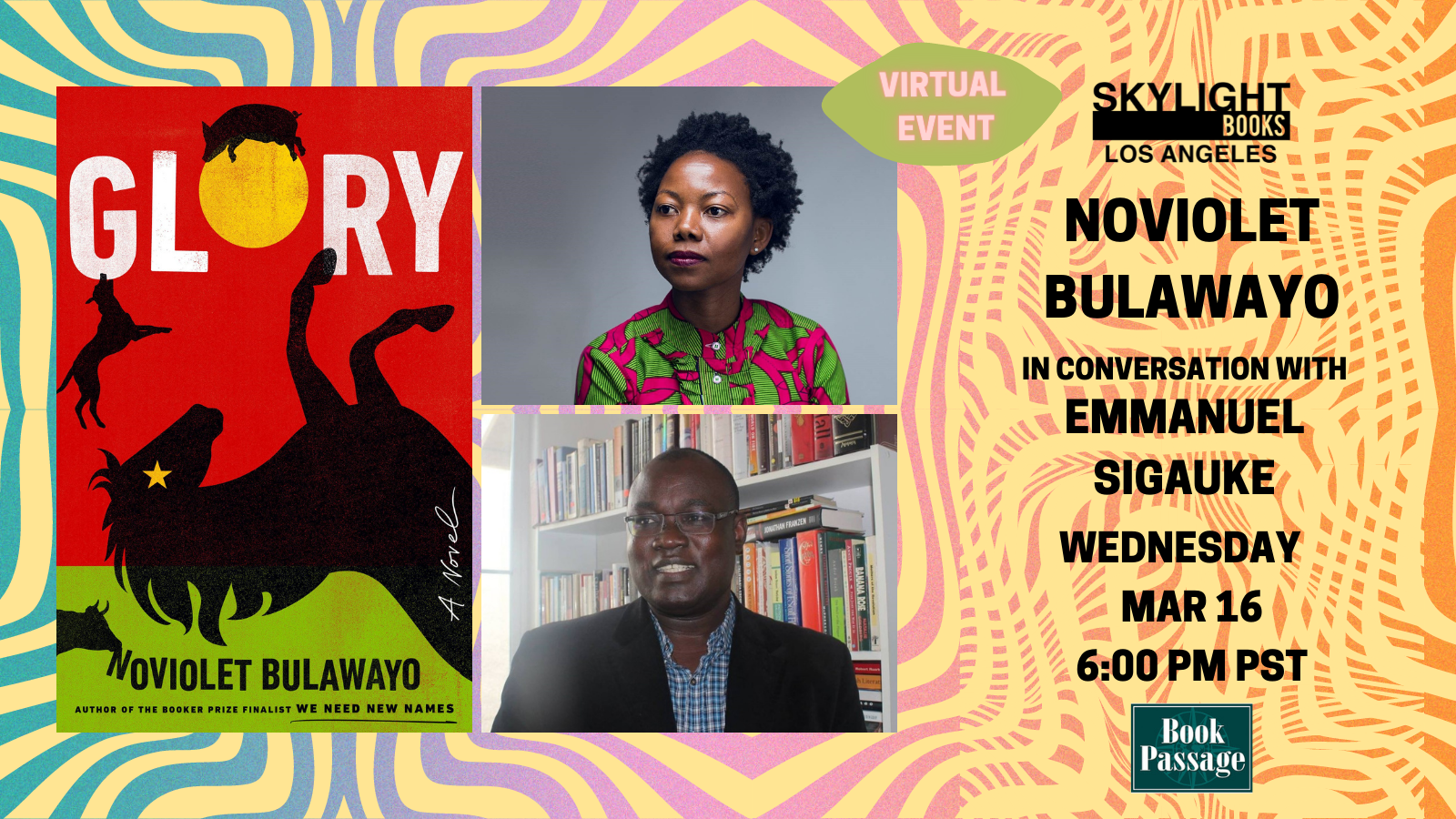 Skylight Books is thrilled to present a special evening in celebration of Glory by NoViolet Bulawayo, in partnership with Book Passage!

From the award-winning author of the Booker-prize finalist We Need New Names, a blockbuster of a novel that chronicles the fall of an oppressive regime, and the chaotic, kinetic potential for real liberation that rises in its wake.

Glory centers around the unexpected fall of Old Horse, a long-serving leader of a fictional country, and the drama that follows for a rumbustious nation of animals on the path to true liberation. Inspired by the unexpected fall by coup, in November 2017, of Robert Mugabe, Zimbabwe's president of nearly four decades, Bulawayo's bold, vividly imagined novel shows a country imploding, narrated by a chorus of animal voices who unveil the ruthlessness and cold strategy required to uphold the illusion of absolute power, and the imagination and bullet-proof optimism to overthrow it completely.

As with her debut novel We Need New Names, Bulawayo's fierce voice and lucid imagery immerses us in the daily life of a traumatized nation, revealing the dazzling life force and irrepressible wit that lies barely concealed beneath the surface of seemingly bleak circumstances. At the center of this tumult is Destiny, who has returned to Jidada from exile to bear witness to revolution--and focus on the unofficial history and the potential legacy of the women who have quietly pulled the strings in this country.

The animal kingdom--its connection to our primal responses and resonance in the mythology, folktales, and fairytales that define cultures the world over--unmasks the surreality of contemporary global politics to help us understand our world more clearly, even as Bulwayo plucks us right out of it. Glory is a blockbuster, an exhilarating ride, and crystalizes a turning point in history with the texture and nuance that only the greatest of fiction can.

NoViolet Bulawayo is the author of We Need New Names, which was a finalist for the Man Booker Prize and won the PEN/Hemingway Award and the LA Times Book Prize for First Fiction, the Zora Neale Hurston/Richard Wright Legacy Award for fiction and the Etisalat Prize for Literature. NoViolet Bulawayo grew up in Zimbabwe, and now lives in California.

Emmanuel Sigauke, founder and editor of Munyori Literary Journal, is the author of Mukoma’s Marriage and other Stories, a finalist for the 2015 NAMA awards, Zimbabwe. He is also co-editor of the collections Roses for Betty and other Stories, and Sundown and other Stories, as well as the African Roar series. Sigauke is based in Sacramento, California, where he teaches writing at Cosumnes River College, and is at work on a novel.

"Few writers possess a literary voice as inimitable as Bulawayo’s…[The] dazzling voices of this novel will draw you deep into its ambitious and mystifying heart."
—Vulture

"Throughout, Bulawayo keenly displays the perspectives of political players and the civilians who bear the brunt of their violence. With satire that feels necessary and urgent, Bulawayo brings clarity to a murky political morass."
—Publishers Weekly

"Conjure[s] a mood of an epic folktale."
—Kirkus Reviews

"Glory is like nothing we’ve read before. It’s a strange, creative, experimental book that will take the reading world by storm, a satire grounded in hope."
—Book Riot

"Inspired by the fall of Robert Mugabe, [Glory] promises an incisive parable for our times."
—Tom Beer, Kirkus Reviews