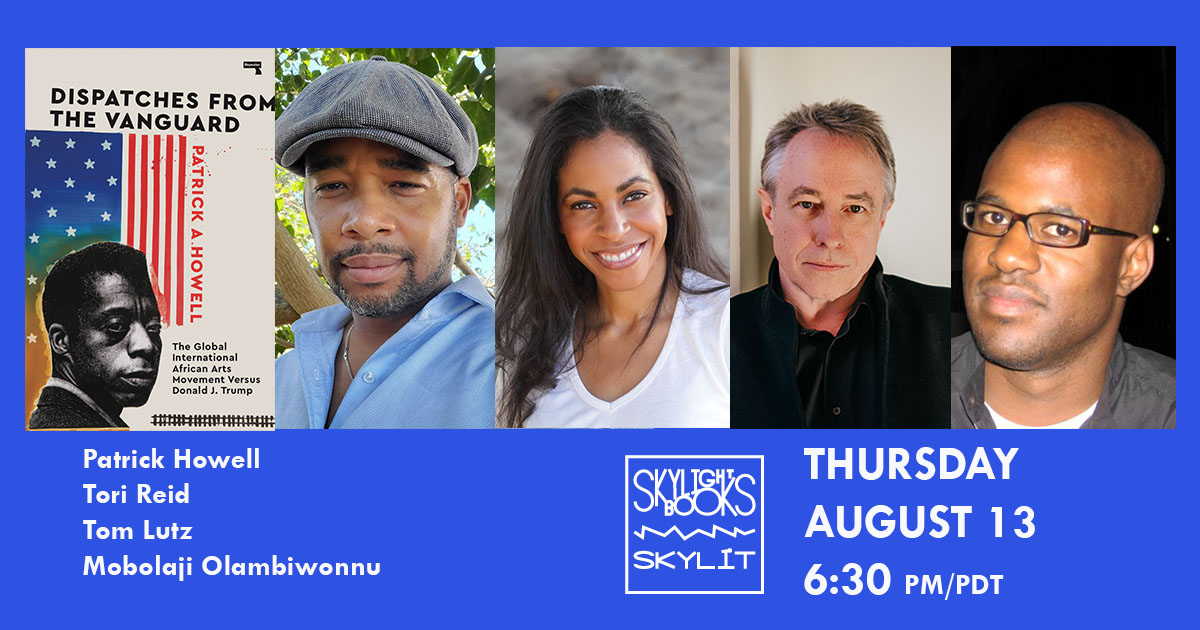 In this election year, Dispatches from the Vanguard also offers a poignant, high-frequency rebuke of Donald J. Trump (actual man, strawman and metaphor for white privilege and capitalist despotism) and his ruthless amoral presidency.

Join us to celebrate publication of the book with editor Patrick A. Howell, and contributors Tori Reid, Tom Lutz, and Mobolaji Olambiwonnu.

Praise for Dispatches from the Vanguard:

“Dispatches from the Vanguard has collected the wisdom, depth, creativity, insight, joy, critique, hope and brazen boldness… a book for those who, in the words of Audre Lorde, are 'deliberate and afraid of nothing.”—Rachel Elizabeth Cargle, public academic and influencer

“Dispatches from the Vanguard is exceptional. It takes our current moment and draws an oral history from architects of the culture.  From the Black Arts Movement and, before that, the Harlem Renaissance to the Global International African Arts Movement.”—Rev. Run, founding member of Run-DMC

“Dispatches from the Vanguard is James Baldwin’s dream manifested through art and culture, through porch talks, poetry and visual debates. This carnival of a book is a dynamic treasure trove of Black passion, style, intellectual prowess, wit, grace and soul.”—Tony Medina, author of Thirteen Ways of Looking at a Black Boy

Patrick A. Howell is a poet and entrepreneur. His essays, short stories and interviews have appeared in the Huffington Post, Xavier Review, Los Angeles Review of Books and Poetry Foundation, among others. He is the COO for Victory & Noble, a storytelling company.

Tori Reid is a Los Angeles-based producer, creative executive and Hollywood insider. She has worked practically in every aspect of the television and film industry, both in front and behind the camera. She is also the CEO and co-founder of Victory & Noble, a storytelling company, and also a new channel debuting on the Los Angeles Review of Books.

Tom Lutz is the founding editor of the Los Angeles Review of Books. He is the author of Born Slippy, And the Monkey Learned Nothing, Drinking Mare’s Milk on the Roof of the World, and Crying. His work has been translated into a dozen languages and named amongst the New York Times' Notable Books. His book Doing Nothing won the American Book Award.

Mobolaji Olambiwonnu is the recipient of several awards including the prestigious Directors Guild of America Student Award. He has held positions as producer, cameraman, and director for companies and organizations such as Sierra Club, Lions Gate, Paramount, Discovery and HBO. Olambiwonnu has also worked in the fields of education, conflict resolution, economic development and campaign organizing.