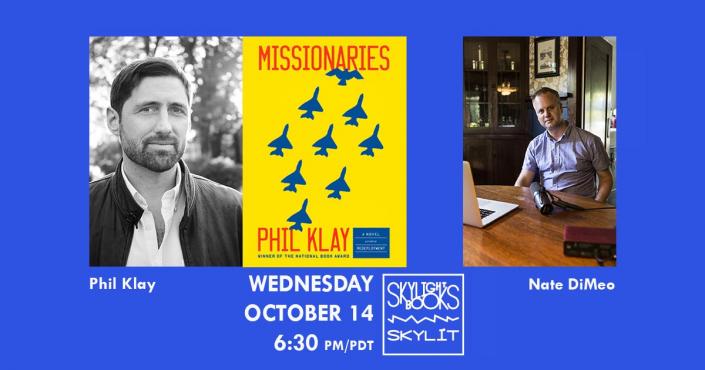 Please note: this event will take place live on Crowdcast. RSVP here to join the livestream or watch the replay!

In the modern world, everything is connected, including how we kill.

A group of Colombian soldiers prepares to raid a drug lord's safe house on the Venezuelan border. They're watching him with an American-made drone, about to strike using military tactics taught to them by U.S. soldiers who honed their skills to lethal perfection in Iraq. In his debut novel Missionaries, National Book Award-winning author and Iraq War veteran Phil Klay examines the globalization of violence through the interlocking stories of four characters and the conflicts that define their lives.

For Mason, a U.S. Army Special Forces medic, and Lisette, a foreign correspondent, America's long post-9/11 wars in the Middle East exerted a terrible draw that neither is able to shake. Where can such a person go next? All roads lead to Colombia, where the US has partnered with local government to keep predatory narco gangs at bay. Mason, now a liaison to the Colombian military, is ready for the good war, and Lisette is more than ready to cover it. Juan Pablo, a Colombian officer, must juggle managing the Americans' presence and navigating a viper's nest of factions bidding for power. Meanwhile, Abel, a lieutenant in a local militia, has lost almost everything in the seemingly endless carnage of his home province, where the lines between drug cartels, militias, and the state are semi-permeable.

Drawing on six years of research in America and Colombia into the effects of the modern way of war on regular people, Klay has written a novel of extraordinary suspense infused with geopolitical sophistication and storytelling instincts that are second to none. Missionaries is a window not only into modern war, but into the individual lives that go on long after the drones have left the skies.

“If Redeployment was about what happened when we ship wars abroad, then Missionaries is what happens when war comes roaring right back. Expansive, explosive, and epic.” —Marlon James, author of Black Leopard, Red Wolf

“Phil Klay's work has the large canvas, bitter clarity, and wild imagination of the great Robert Stone. With Missionaries he more than fulfills the immense promise of Redeployment.” —George Packer, author of The Unwinding and Our Man

“With Missionaries Klay, winner of the National Book Award in 2014, has dropped a novel on us of a muscular veracity as terrifying and important as it is rare in contemporary writing.” —The Millions

“National Book Award-winner Klay displays his signature virtuosity in this richly textured, masterful mosaic of modern Colombia. A small village serves as both backdrop and microcosm of the country’s ongoing turmoil. The struggle for survival is deftly juxtaposed with the struggle for power, and the varying gradations of each are explored through multiple perspectives with nuance, grace, and poignancy . . . Each character is rendered in psychologically astute moral complexity and must interrogate his or her own complicity in a corrupt and often violent system. Ultimately, all are pawns in the chess match of deep-state machinations masquerading as diplomacy. As the characters’ lives begin to intersect in a rewarding, yet tension-filled denouement, the author’s prodigious skill and deep understanding of the region provide the scaffolding to explore essential questions of human dignity and sacrifice. A triumphant achievement that elevates Klay to the top echelon of contemporary writers.” —Booklist, starred review

“[Klay] creates ambiguity not through atmospheric language or irony (Redeployment had its share of Heller-esque gallows humor) but through careful psychological portraits that reveal how readily relationships grow complicated and how even good intentions come undone in the face of humanity’s urge to violence. . . . An unflinching and engrossing exploration of violence’s agonizing persistence.” —Kirkus (starred review)

“The prose is consistently staggering, whether in the characters’ moments of self-reflection or unflinching descriptions of brutality . . . it’s quite a ride.” —Publishers Weekly

“What happens when a novel becomes more than a novel? It becomes a prophecy. Phil Klay has written a prophecy.” —Elliot Ackerman, author of Red Dress in Black and White

“Phil Klay’s Missionaries is a big, rich, clear-eyed book about death and life; wise, compassionate, and, yes, as cynical as it needs to be when necessary, but full of vivid people caught up in that organized human violence which is our species’ haunting passion. I’ve maybe never read a war novel this good.” —Ayad Akhtar, Pulitzer Prize–winning playwright of Disgraced

“Phil Klay’s Missionaries has a sweep and incisiveness to it I had almost forgotten novels were capable of. I haven’t been so gripped by a book in years. It is immensely smart and farseeing, and utterly unsparing. Extraordinary.” —Garth Greenwell, author of Cleanness and What Belongs to You

Phil Klay is a veteran of the US Marine Corps. His short story collection Redeployment won the 2014 National Book Award for Fiction and the National Book Critics’ Circle John Leonard Prize for best debut work in any genre, and was selected as one of the 10 Best Books of 2014 by The New York Times. His nonfiction work won the George W. Hunt, S.J., Prize for Journalism, Arts & Letters in the category of Cultural & Historical Criticism in 2018. His writing has appeared in The New York Times, The Washington Post, The Wall Street Journal, The Atlantic, The New Yorker, and the Brookings Institution’s Brookings Essay series. He currently teaches fiction at Fairfield University.

Nate DiMeo is the creator of the acclaimed podcast The Memory Palace. He was the artist in residence at The Metropolitan Museum of New York. He was a finalist for the Thurber Prize in American Humor for co-writing Pawnee: The Greatest Town in America, while pretending to be Leslie Knope. He lives down the street.