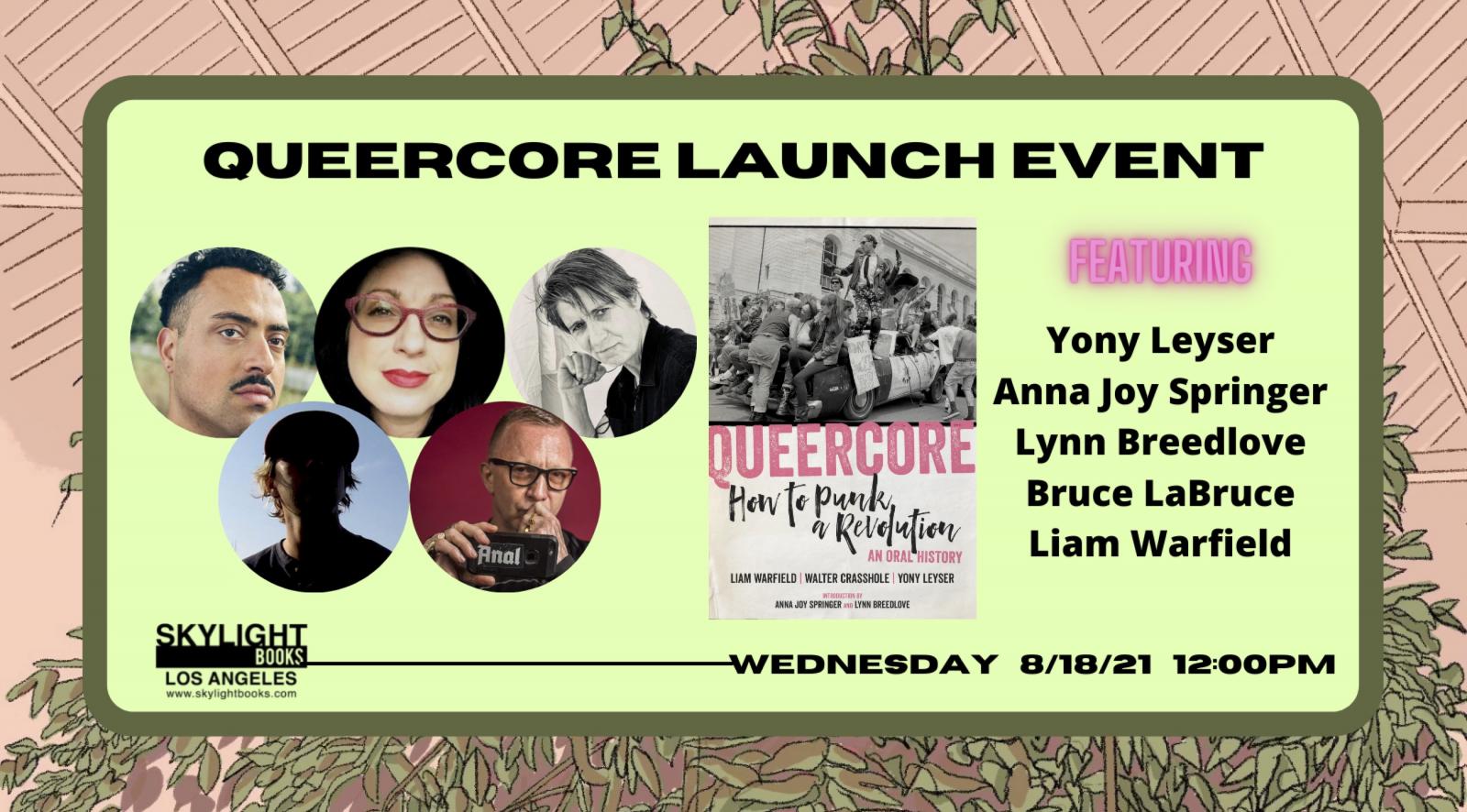 Queercore: How to Punk a Revolution: An Oral History (PM Press)

Queercore is the very first comprehensive overview of a movement that defied both the music underground and the LGBT mainstream community. With exclusive interviews alongside a treasure trove of never-before-seen photographs and reprinted zines from the time, the book traces the history of a scene originally “fabricated” in the bedrooms and coffee shops of Toronto and San Francisco by a few young, queer punks to its emergence as a relevant and real revolution. Queercore is a down-to-details firsthand account of the movement explored by the people that lived it—from punk’s early queer elements, to the moment that Toronto kids decided they needed to create a scene that didn’t exist, to Pansy Division's infiltration of the mainstream, and the emergence of riot grrrl—as well as the clothes, zines, art, film, and music. Queercore will stand as both a testament to radically gay politics and culture and an important reference for those who wish to better understand this explosive movement. Listen to and learn from the main protagonists of the movement who gave a middle finger to complacent gay and straight society. The book was published by PM Press, 2021.

Yony Leyser grew up in Chicago and relocated to Berlin in 2010. He is the writer and director of three award-winning feature films: William S. Burroughs: A Man Within; Desire Will Set You Free; and Queercore: How to Punk a Revolution. He has received critical acclaim in publications including the New York Times, the Guardian, Sight and Sound, and the Los Angeles Times. Yony is the coeditor of the Queercore book along with Walter Crasshole and Liam Warfield.

Anna Joy Springer is the author of The Vicious Red Relic, Love (Jaded Ibis, 2011), an illustrated fabulist memoir with soundscape (Your Metaforest Guidebook), and The Birdwisher, A Murder Mystery for Very Old Young Adults (Birds of Lace, 2009). Her work appears in zines, journals, anthologies, and recordings. An Associate Professor of Literature at UC San Diego, she teaches experimental writing, feminist literature and graphic texts. She’s performed in punk and queercore bands Blatz, The Gr’ups, and Cypher in the Snow and toured the U.S. with the writers of Sister Spit. She lives in Los Angeles.

Lynn Breedlove is a writer, performer, musician, entrepreneur and community activist born and raised in the SF Bay Area. He’s toured comedy solo shows and with bands Tribe8 and The Homobiles. He is the founder and CEO of Homobiles the ride service. Author of Godspeed and Lynnee Breedlove’s One Freak Show.

Anna Joy Springer and Lynn Breedlove wrote the Introduction to the Queercore book.

Bruce LaBruce is an internationally acclaimed filmmaker, photographer, writer, and artist based in Toronto. Along with a number of short films, he has written and directed nine feature films. LaBruce has contributed to a variety of international magazines, newspapers and websites as both a writer and photographer. He has been honored with film retrospectives at both TIFF/Bell Lightbox in 2014 and at the Museum of Modern Art in New York in 2015.

Liam Warfield is a writer, editor, and educator living in Chicago.

“Queercore is the unrelenting polyrhythm of a culture, chanted in varied waves of sensation, by some of its most essential voices. Zigzagging through generations of nostalgia and controversy faster than their own power chords, this is not just a record of queercore (the movement), but a theoretical discussion about the intersectional ideology of ‘Queer,’ as well as ‘Punk’ itself. Reading this book gave me the absolutely necessary opportunity to reinvigorate my own punk, both as performance art and radical protest. This unflinching oral history of how a subculture begins and survives, tenaciously layered in the present, is a bridge over the gap, that I, for one, have been waiting for.” —JD Samson, musician, producer, songwriter, and DJ (Le Tigre, MEN)

“Finally, a book that centers on the wild, innovative, and fearless contributions queers made to punk rock, creating a punker-than-punk subculture beneath the subculture, Queercore. Gossipy and inspiring, a historical document and a call to arms during a time when the entire planet could use a dose of queer, creative rage.”—Michelle Tea, author of Valencia

“I knew at an early age I didn’t want to be part of a church, I wanted to be part of a circus. It’s documents such as this book that give hope for our future. Anarchists, the queer community, the roots of punk, the Situationists, and all the other influential artistic guts eventually had to intersect. Queercore is completely logical, relevant, and badass.”—Justin Pearson, The Locust, Three One G

“This is a sensational set of oral histories of queer punk that includes everyone from Jayne County to Eileen Myles, from Vaginal Davis to Lynn Breedlove. The whole book works like a giant jigsaw puzzle that never offers a final or complete picture but at least scatters the pieces around to allow the reader to assemble some truly exciting scenarios. This is very possibly the best and only way that subcultural histories should emerge—namely as incomplete and incoherent, as a magnificent poly-vocal roar, as sound, fury, rebel yells and screams. This does not just capture queer punk, it is queer punk.”—Jack Halberstam, author of The Queer Art of Failure and In A Queer Time and Place: Transgender Bodies, Subcultural Lives

“Queercore: How To Punk a Revolution delivers a deeply invested history of the forgotten roots of queercore. While to some punk was inherently gay as fuck, the actual queer revolution came few and far between bands, scenes, and eras whose intersections were small, yet wildly significant. With voices ranging from Penny Arcade to Brontez Purnell, we hear a vast history from around the globe, echoing everything queer, dirty, and true.”—Cristy C. Road, frontwoman of Choked Up and author of Spit and Passion and Next World Tarot

Queercore: How to Punk a Revolution: An Oral History (Paperback)