LIVE ON CROWDCAST: QUIARA ALEGRÍA HUDES reads from her memoir MY BROKEN LANGUAGE with KIMBERLY DREW 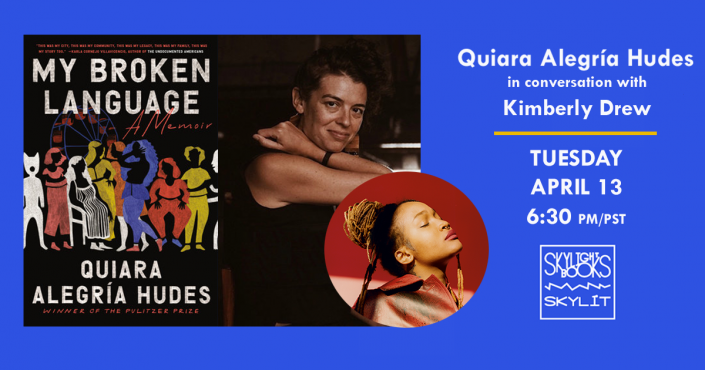 My Broken Language (One World)

A Pulitzer Prize–winning playwright tells her lyrical story of coming of age against the backdrop of an ailing Philadelphia barrio, with her sprawling Puerto Rican family as a collective muse.

Quiara Alegría Hudes was the sharp-eyed girl on the stairs while her family danced in her grandmother’s tight North Philly kitchen. She was awed by her aunts and uncles and cousins, but haunted by the secrets of the family and the unspoken, untold stories of the barrio—even as she tried to find her own voice in the sea of language around her, written and spoken, English and Spanish, bodies and books, Western art and sacred altars. Her family became her private pantheon, a gathering circle of powerful orisha-like women with tragic real-world wounds, and she vowed to tell their stories—but first she’d have to get off the stairs and join the dance. She’d have to find her language.

Weaving together Hudes’s love of books with the stories of her family, the lessons of North Philly with those of Yale, this is an inspired exploration of home, memory, and belonging—narrated by an obsessed girl who fought to become an artist so she could capture the world she loved in all its wild and delicate beauty.

Quiara Alegría Hudes is the Pulitzer Prize-winning playwright of Water By the Spoonful and the author of a memoir, My Broken Language. With collaborator Lin-Manuel Miranda she wrote the Tony Award-winning Broadway musical In the Heights and the film adaptation hitting screens this June. Her notable essays include High Tide of Heartbreak in American Theater Magazine and Corey Couldn’t Take It Anymore in The Cut. In opposition of the carceral state, Hudes and her cousin founded Emancipated Stories, a platform where people behind bars can share one page of their life story with the world. As a barrio feminist and joyous mischief maker, Quiara y su hermana created the Latinx Casting Manifesto. Hudes is a native of West Philly, U.S.A. and now lives with her family in New York.

Kimberly Drew is a writer, curator, and activist. Drew received her B.A. from Smith College in art history and African-American studies. During her time at Smith, she launched the Tumblr blog Black Contemporary Art, which has featured artwork by nearly 5,000 black artists. Her book, Black Futures, which she co-edited with Jenna Wortham, was released last December and was named a New York Times Editor’s Choice. Drew's writing has appeared in Vanity Fair, Elle UK, and Glamour. She lives in Brooklyn, New York. Twitter: @museummammy Instagram: @museummammy

Praise for My Broken Language:

“Quiara Alegría Hudes is in her own league. Her sentences will take your breath away. How lucky we are to have her telling our stories.”—Lin-Manuel Miranda, award-winning creator of Hamilton

"Quiara Alegría Hudes is a bona fide storyteller about the people she loves—especially the women in her family who cook, talk, light candles, and conjure the spirits. Enormously empathetic and funny, My Broken Language is rich with unflinching observations that bring us in close, close, without cloaking the details. The language throughout is gorgeous and so moving. I love this book.”—Angie Cruz, author of Dominicana

“Every line of this book is poetry. From North Philly to all of us, Hudes showers us with aché, teaching us what it looks like to find languages of survival in a country with a ‘panoply of invisibilities.’ Hudes paints unforgettable moments on every page for mothers and daughters and all spiritually curious and existential human beings. This story is about Latinas. But it is also about all of us.”—Maria Hinojosa, Emmy Award–winning journalist and author of Once I Was You: A Memoir of Love and Hate in a Torn America

“Wise, graceful, and devastatingly beautiful, Hudes’s memoir gives voice to the complicated cultural collisions and gentle rebellions that seed a life. I was inspired and moved by the resilient spirit of Hudes and the Perez women, who through joy and great heartbreak manage to conjure a remarkable world in and beyond their Philly barrio.”—Lynn Nottage, two-time Pulitzer Prize–winning playwright

My Broken Language: A Memoir (Hardcover)