LIVE ON CROWDCAST: RALPH BLUMENTHAL discusses his book THE BELIEVER with DAN AYKROYD 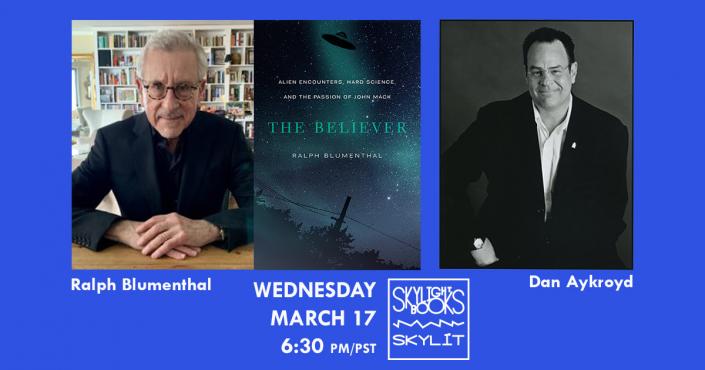 The Believer is the weird and chilling true story of Dr. John Mack. This eminent Harvard psychiatrist and Pulitzer Prize–winning biographer risked his career to investigate the phenomenon of human encounters with aliens and to give credibility to the stupefying tales shared by people who were utterly convinced they had happened.

Nothing in Mack’s four decades of psychiatry had prepared him for the otherworldly accounts of a cross-section of humanity including young children who reported being taken against their wills by alien beings. Over the course of his career his interest in alien abduction grew from curiosity to wonder, ultimately developing into a limitless, unwavering passion.

Based on exclusive access to Mack’s archives, journals, and psychiatric notes and interviews with his family and closest associates, The Believer reveals the life and work of a man who explored the deepest of scientific conundrums and further leads us to the hidden dimensions and alternate realities that captivated Mack until the end of his life.

Praise for The Believer:

“This extraordinary biography reads like a fast-paced thriller. It deftly weaves the detailed richness of John Mack’s genius and complex life through the historical backdrop of the alien-abduction phenomena. Ralph Blumenthal has so beautifully captured the essence of Mack’s soul and his relentless curiosity that by the end of the book I mourned that Mack is no longer with us.”—Trish MacGregor, coauthor of Aliens in the Backyard: UFO Encounters, Abductions, and Synchronicity

“As a person sane enough to hold a driver’s license, I say, what are we to make of Mack’s findings? Read this gripping, factual account of a mental-health pioneer and truth-seeker by a soundly accredited successful author, veteran New York Times foreign correspondent, and reporter. Decide for yourselves and then tell me!”—Dan Aykroyd

“Anyone who is intrigued by the involvement of John Mack, a psychiatrist on the faculty of Harvard, or by the interest of psychiatrists in the anomalous in general and UFOs in particular, should not miss reading this book! It is filled with details on the topic, both pro and con, that are not publicly available in any other place that I know.”—David J. Hufford, author of The Terror that Comes in the Night: An Experience-Centered Study of Supernatural Assault Traditions

“John Mack was one of the few prominent American intellectuals who saw and said what was, and still is, really at stake in the UFO phenomenon—reality itself. And Ralph Blumenthal is the perfect biographer to take up Mack and bring him to life, in all his humanity and complexity, on the page. A major achievement.”—Jeffrey J. Kripal, author of The Flip: Epiphanies of Mind and the Future of Knowledge

Ralph Blumenthal was an award-winning reporter for the New York Times. He coauthored the Times article in 2017 that broke the news of a secret Pentagon unit investigating UFOs, and he is the author of four nonfiction books including Miracle at Sing Sing: How One Man Transformed the Lives of America’s Most Dangerous Prisoners. A distinguished lecturer at Baruch College, he lives in New York City.

Dan Aykroyd is an Academy Award nominated, Grammy nominated and Emmy Award winning actor, comedian, screenwriter, and most recently business entrepreneur. He has been inducted into Canada's Walk of Fame and maintains his Canadian roots as a longtime resident of Kingston, Ontario. In 1994 Aykroyd received an honorary Doctor of Literature degree from Carleton University. The films with which Mr. Aykroyd has had principal associations have grossed close to one billion dollars worldwide. He was awarded an Emmy for his writing on the Saturday Night Live show starring Sissy Spacek. Other credits include “The Candidate,” “Tammy, “Get on Up” as well as the HBO film “Behind the Candelabra.” Aykroyd can currently be heard as the narrator of the A&E series “Hotel Paranormal" and is an Executive Producer of the upcoming Jason Reitman Sony Pictures film “Ghostbusters: Afterlife” which will be released in theatres in June 11, 2021. In 1992 he, along with many other notable music and Hollywood personalities, founded the House of Blues. The House of Blues currently has 13 live music concert halls across the country. In 2007 Aykroyd announced his newest venture--The Dan Aykroyd Winery. The winery is all green, featuring solar panels and environmental water management systems.

The Believer: Alien Encounters, Hard Science, and the Passion of John Mack (Hardcover)