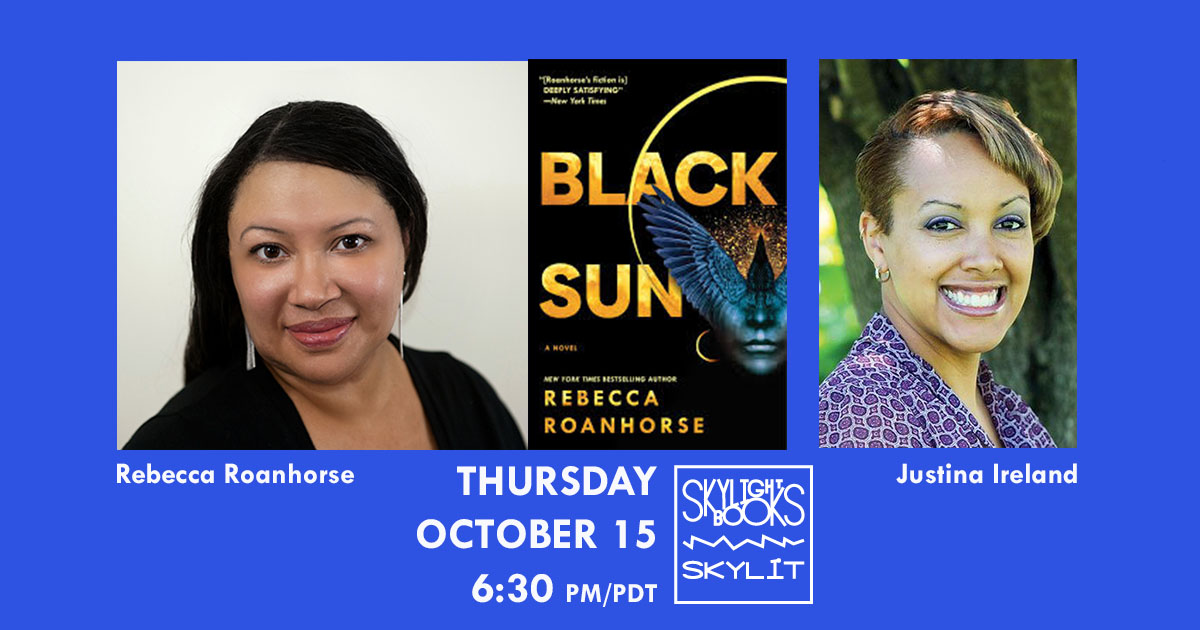 *Please note: This event will take place live on Crowdcast. Admission is granted with purchase of BLACK SUN. Order your signed copy here to receive the event password.

From the New York Times bestselling author of Star Wars: Resistance Reborn comes the first book in the Between Earth and Sky trilogy, inspired by the civilizations of the Pre-Columbian Americas and woven into a tale of celestial prophecies, political intrigue, and forbidden magic.

In the holy city of Tova, the winter solstice is usually a time for celebration and renewal, but this year it coincides with a solar eclipse, a rare celestial event proscribed by the Sun Priest as an unbalancing of the world.

Meanwhile, a ship launches from a distant city bound for Tova and set to arrive on the solstice. The captain of the ship, Xiala, is a disgraced Teek whose song can calm the waters around her as easily as it can warp a man’s mind. Her ship carries one passenger. Described as harmless, the passenger, Serapio, is a young man, blind, scarred, and cloaked in destiny. As Xiala well knows, when a man is described as harmless, he usually ends up being a villain.

Crafted with unforgettable characters, Rebecca Roanhorse has created an epic adventure exploring the decadence of power amidst the weight of history and the struggle of individuals swimming against the confines of society and their broken pasts in the most original series debut of the decade.

"The pages turn themselves. A beautifully crafted setting with complex character dynamics and layers of political intrigue? Perfection. Mark your calendars, this is the next big thing." -- Kirkus, starred review

"Roanhorse introduces an epic fantasy with vivid worldbuilding and exciting prose. Readers will be attracted to the story, in which there is no real right vs. wrong. Only inevitable change will draw out the heroes of this imaginative tale." -- Library Journal, starred review

“I emerged from Black Sun bleary-eyed, tongue-tied, heart-swollen. This is a brilliant world that shows the full panoply of human grace and depravity. Rebecca Roanhorse is the epic voice of our continent and time.”—Ken Liu, award-winning author of The Grace of Kings, and The Hidden Girl and Other Stories.

"Engrossing and vibrant. Black Sun left me with my jaw on the floor."—Tochi Oneybuchi, author of Riot Baby

“Sweeping yet intimate, Black Sun is a masterpiece. Roanhorse has crafted an urgently important and utterly engrossing tale of power, oppression, revolution—and the deeply personal cost of each. This is the fantasy epic the world needs right now.”—Peng Shepherd, author of The Book of M

"Absolutely tremendous. Roanhorse knocks it out of the park again with an epic tale about duty and destiny that will sweep readers away and broaden the horizons of an entire genre."—S.A. Chakraborty, nationally bestselling author of The City of Brass.

"Black Sun is an inspired fantasy that will keep you turning pages past your bedtime and have you cheering for each of the ensemble cast as they careen towards a fateful cataclysm. Love fantasy? This is the book for you. Hate fantasy? This is especially for you. Roanhorse has created an excellent world that feels lived in and characters that feel like people you know, which is exactly what I would expect in a book by an author at the top of her game."—Justina Ireland, New York Times bestselling author of Dread Nation.

"With multifaceted characters on the level of a political thriller, a world so unique and vivid, you'll wish you had an infinite number of pages in which to explore it, and a quest worthy of the best in epic fantasy, Rebecca Roanhorse's Black Sun will transform you. An extraordinary journey."—Fran Wilde, author of Updraft and Riverland, two-time Nebula winner and Hugo, World Fantasy and Locus finalist

“The world sucks you in from the start, and the pacing yanks you along by the collar. Black Sun is instantly riveting from the beginning—Roanhorse is at the top of her game here.”—R.F. Kuang, bestselling author of The Poppy War

Rebecca Roanhorse is the New York Times bestselling author of Trail of Lightning, Storm of Locusts, Star Wars: Resistance Reborn, and Race to the Sun. She has won the Nebula, Hugo, and Locus Awards for her fiction, and was the recipient of the 2018 Astounding (formerly Campbell) Award for Best New Writer. Her forthcoming book, Black Sun, is out in October. She lives in New Mexico with her family.

Justina Ireland is the author of Dread Nation (Balzer + Bray/HarperCollins), a New York Times bestseller as well as the sequel Deathless Divide. Her earlier works include the fantasy young adult novels Vengeance Bound and Promise of Shadows (both Simon and Schuster). Justina also writes for the Star Wars franchise, including the books Lando’s Luck, Spark of the Resistance, and the upcoming A Test of Courage, part of the High Republic publishing initiative. She is the former co-editor in chief of FIYAH Literary Magazine of Black Speculative Fiction, for which she won a World Fantasy Award.

Race to the Sun (Hardcover)