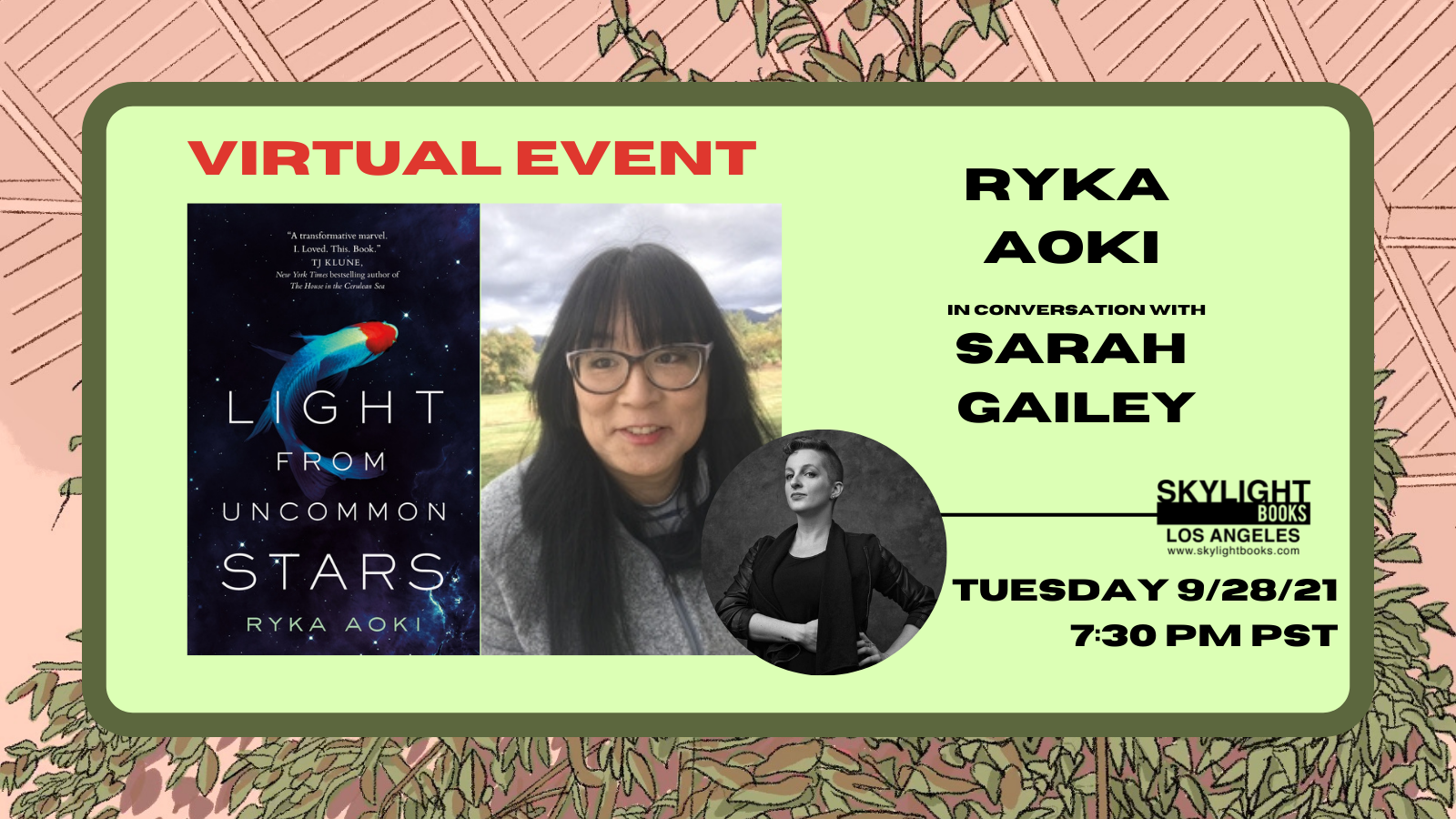 Join us on Crowdcast for the virtual launch of Light From Uncommon Stars! RSVP here.

Shizuka Satomi made a deal with the devil: to escape damnation, she must entice seven other violin prodigies to trade their souls for success. She has already delivered six.

But in a donut shop off a bustling highway in the San Gabriel Valley, Shizuka meets Lan Tran, retired starship captain, interstellar refugee, and mother of four. Shizuka doesn't have time for crushes or coffee dates, what with her very soul on the line, but Lan's kind smile and eyes like stars might just redefine a soul's worth. And maybe something as small as a warm donut is powerful enough to break a curse as vast as the California coastline.

As the lives of these three women become entangled by chance and fate, a story of magic, identity, curses, and hope begins, and a family worth crossing the universe for is found.

RYKA AOKI (she/her) is a poet, composer, teacher, and novelist whose books include He Mele a Hilo and two Lambda Award finalists, Seasonal Velocities and Why Dust Shall Never Settle Upon This Soul. Ryka’s work has appeared or been recognized in publications including Vogue, Elle, Bustle, Autostraddle, PopSugar, and Buzzfeed. Her poetry was featured at the Smithsonian Asian Pacific American Center, and she was honored by the California State Senate for “extraordinary commitment to the visibility and well-being of Transgender people.”

Hugo Award-winning and bestselling author Sarah Gailey is the author of the novels The Echo Wife and Magic for Liars. Their nonfiction has been published by Mashable and The Boston Globe, and they won a Hugo Award for Best Fan Writer. Their fiction credits also include Vice and The Atlantic. Their debut novella, River of Teeth, was a 2018 finalist for both the Hugo and Nebula Awards.

Praise for Light From Uncommon Stars:

“Filled with mouthwatering descriptions of food and heart-swelling meditations on music, this novel is an unexpected gift.”—Kirkus, starred review

“Aoki's novel is an exciting, wild web of an adventure, an unputdownable book about music, found family, and identity. Diving into the tough subjects, Aoki's book emerges with a joyful, queer, radical ballad of a story. . .”—Booklist, starred review

“A dark but ultimately hopeful sci-fi exploration of the threats faced by queer people of color [and] a love letter to immigrant culture and the power people have to save each other . . . a beautiful, satisfying story of redemption and families of choice.”—Publishers Weekly

“A transformative marvel. I have never read a book quite like this before. I laughed. I wept. I believed in the power of souls. This is a novel that will be talked about for years to come, and deservedly so. I. Loved. This. Book.”—T. J. Klune, New York Times bestselling author

“Delightful and heartbreaking. An unexpected mashup of science fiction and fantasy that will make you love music, crave donuts, and wish to read it all again.”—John Scalzi, New York Times bestselling author

“This book broke my heart and glued it back together stronger than before. Skillful, stunning, absolutely gorgeous.”—Becky Chambers, USA Today bestselling author

“A beautiful story of friendship and love . . . incredibly soothing and kind and sweet and delightful. I fell in love with these characters and did not even realize how desperately I needed this story right now.”—Charlie Jane Anders, author of All the Birds in the Sky

“A story that sparkles with magic and music and joy; this book just sings.”—Everina Maxwell, author of Winter's Orbit

“A kaleidoscopic and riveting symphony . . . Aoki has conjured the most spellbinding venues to unpack race, sexuality, and class with both ingenuity and heart. A new classic.”—Sequoia Nagamatsu, author of Where We Go When All We Were Is Gone

“Ryka Aoki's prose is sublime, the emotional connections she makes are like sparkling jewels . . . Light From Uncommon Stars is fantastic, beautiful, and deeply, profoundly moving.”—Jenn Lyons, author of Ruin of Kings

“A singing, full-hearted, fearless—and fearlessly goofy—vision that dances across the border between real and surreal, heartrending and sweet, with the nonstop energy of Douglas Adams, and a deep, merciless compassion.”—Max Gladstone, author of Empress of Forever

He Mele A Hilo: A Hilo Song (Paperback)

Why Dust Shall Never Settle Upon This Soul (Paperback)

Under The Belly of the Beast (Paperback)

Magic for Liars: A Novel (Paperback)