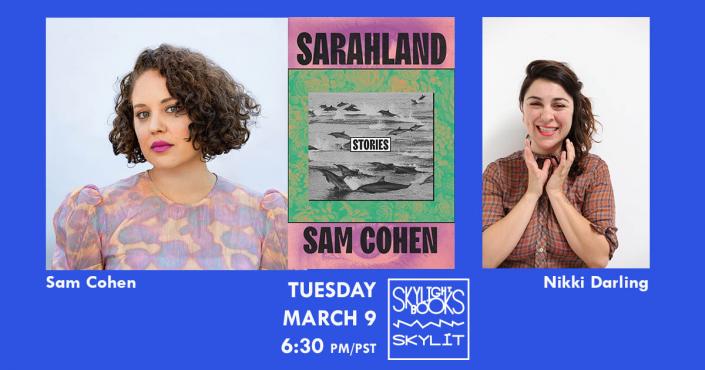 "Queer, dirty, insightful, and so funny" (Andrea Lawlor), this coyly revolutionary debut story collection imagines new origins and futures for its cast of unforgettable protagonists—almost all of whom are named Sarah.

In Sarahland, Sam Cohen brilliantly and often hilariously explores the ways in which traditional stories have failed us, both demanding and thrillingly providing for its cast of Sarahs new origin stories, new ways to love the planet and those inhabiting it, and new possibilities for life itself. In one story, a Jewish college Sarah passively consents to a form-life in pursuit of an MRS degree and is swept into a culture of normalized sexual violence. Another reveals a version of Sarah finding pleasure—and a new set of problems—by playing dead for a wealthy necrophiliac. A Buffy-loving Sarah uses fan fiction to work through romantic obsession. As the collection progresses, Cohen explodes this search for self, insisting that we have more to resist and repair than our own personal narratives. Readers witness as the ever-evolving "Sarah" gets recast: as a bible-era trans woman, an aging lesbian literally growing roots, a being who transcends the earth as we know it. While Cohen presents a world that will clearly someday end, "Sarah" will continue.

In each Sarah's refusal to adhere to a single narrative, she potentially builds a better home for us all, a place to live that demands no fixity of self, no plague of consumerism, no bodily compromise, a place called Sarahland.

"Sam Cohen's stories re-wire the brain. Enter into this multiverse of Sarahs you didn't know you knew, and you'll come out the other end thinking only in Sarahs, only of Sarahs. Sarahland is satisfyingly queer, dirty, insightful, disarmingly generous, astonishing in its craftsmanship and so funny. Easily one of my favorite collections of short fiction ever!" – Andrea Lawlor, author of Paul Takes the Form of a Mortal Girl

"Reading Sarahland is pure pleasure - what a voice! What a constant flow of funny and vulnerable and distinct awarenesses! Sam Cohen's writing is joyously itself and places its own keen, insightful gaze on the ways we relate to ourselves and to others." – Aimee Bender, author of The Particular Sadness of Lemon Cake

"The tilted, weird world of Sarahland is nothing short of revolutionary. Cohen gives a polyphonic voice and a kaleidoscopic face to the exuberant possibilities of modern identity. Hilarious and groundbreaking, I felt bereft when I finished reading, sad to leave the sealed brilliance of Cohen's whirring brain. Every story in Sarahland is outrageously smart, every line of prose unabashed, surprising, and blistering with style." – Kimberly King Parsons, author of the National Book Award long-listed collection Black Light

Sam Cohen was born and raised in suburban Detroit. Her fiction is published in Fence, Bomb, Diagram, and Gulf Coast, among others. The recipient of a MacDowell fellowship and a PhD fellow at the University of Southern California, Cohen lives in Los Angeles.

Nikki Darling is a writer, artist, and performer based in Los Angeles. She received her MFA from CalArts and is a PhD candidate in USC's literature and creative writing program. Her debut novel Fade Into You was published on Feminist Press in 2018.

Fade Into You (Paperback)