LIVE ON CROWDCAST: SAM KEAN in conversation with MEGAN ROSENBLOOM 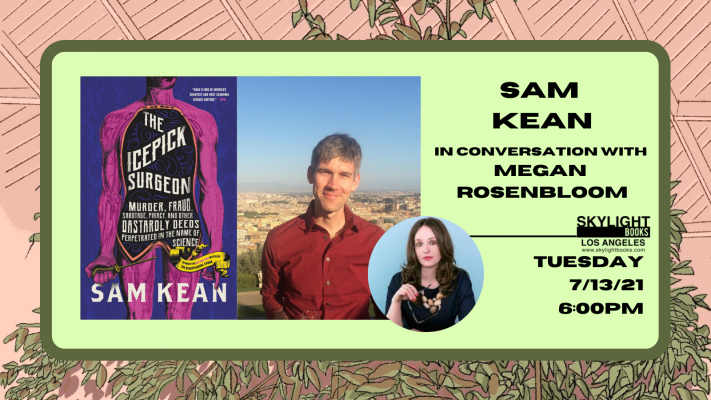 *Join us on Crowdcast for a livestream with Sam Kean, authors of THE ICEPICK SURGEON, in conversation with Megan Rosenbloom!

Science is a force for good in the world—at least usually. But sometimes, when obsession gets the better of scientists, they twist a noble pursuit into something sinister. Under this spell, knowledge isn’t everything, it’s the only thing—no matter the cost. Bestselling author Sam Kean tells the true story of what happens when unfettered ambition pushes otherwise rational men and women to cross the line in the name of science, trampling ethical boundaries and often committing crimes in the process.

The Icepick Surgeon masterfully guides the reader across two thousand years of history, beginning with Cleopatra’s dark deeds in ancient Egypt. The book reveals the origins of much of modern science in the transatlantic slave trade of the 1700s, as well as Thomas Edison’s mercenary support of the electric chair and the warped logic of the spies who infiltrated the Manhattan Project. But the sins of science aren’t all safely buried in the past. Many of them, Kean reminds us, still affect us today. We can draw direct lines from the medical abuses of Tuskegee and Nazi Germany to current vaccine hesitancy, and connect icepick lobotomies from the 1950s to the contemporary failings of mental-health care. Kean even takes us into the future, when advanced computers and genetic engineering could unleash whole new ways to do one another wrong.

Unflinching, and exhilarating to the last page, The Icepick Surgeon fuses the drama of scientific discovery with the illicit thrill of a true-crime tale. With his trademark wit and precision, Kean shows that, while science has done more good than harm in the world, rogue scientists do exist, and when we sacrifice morals for progress, we often end up with neither.

Sam Kean is the New York Times bestselling author of The Bastard Brigade, Caesar's Last Breath (the Guardian's Science Book of the Year), The Tale of the Dueling Neurosurgeons, The Violinist's Thumb, and The Disappearing Spoon. He is also a two-time finalist for the PEN / E. O. Wilson Literary Science Writing Award. His work has appeared in The Best American Science and Nature Writing, The New Yorker, The Atlantic, and the New York Times Magazine, among other publications, and he has been featured on NPR's Radiolab, All Things Considered, Science Friday, and Fresh Air. His podcast, The Disappearing Spoon, debuted at #1 on the iTunes science charts. Kean lives in Washington DC.

Megan Rosenbloom is the co-founder and director of Death Salon, the event arm of The Order of the Good Death, and a proponent of the Death Positive movement. She leads a research team called The Anthropodermic Book Project that aims to find the historic and scientific truths behind the world’s alleged books bound in human skin, or anthropodermic bibliopegy, and her bestselling debut book about this practice, titled Dark Archives: A Librarian’s Investigation into the Science and History of Books Bound in Human Skin, won the 2021 LAMPHHS Best Monograph Award.  In a former life she was a journalist in Philadelphia and continues to write for both academic and non-academic publications.

The Icepick Surgeon: Murder, Fraud, Sabotage, Piracy, and Other Dastardly Deeds Perpetrated in the Name of Science (Hardcover)

The Disappearing Spoon: And Other True Tales of Madness, Love, and the History of the World from the Periodic Table of the Elements (Paperback)

The Bastard Brigade: The True Story of the Renegade Scientists and Spies Who Sabotaged the Nazi Atomic Bomb (Paperback)

The Violinist's Thumb: And Other Lost Tales of Love, War, and Genius, as Written by Our Genetic Code (Paperback)

Caesar's Last Breath: And Other True Tales of History, Science, and the Sextillions of Molecules in the Air Around Us (Paperback)

The Tale of the Dueling Neurosurgeons: The History of the Human Brain as Revealed by True Stories of Trauma, Madness, and Recovery (Paperback)

Dark Archives: A Librarian's Investigation into the Science and History of Books Bound in Human Skin (Hardcover)