LIVE ON CROWDCAST: SAM MAGGS reads from her new YA novel THE UNSTOPPABLE WASP: BUILT ON HOPE with E.K. JOHNSTON 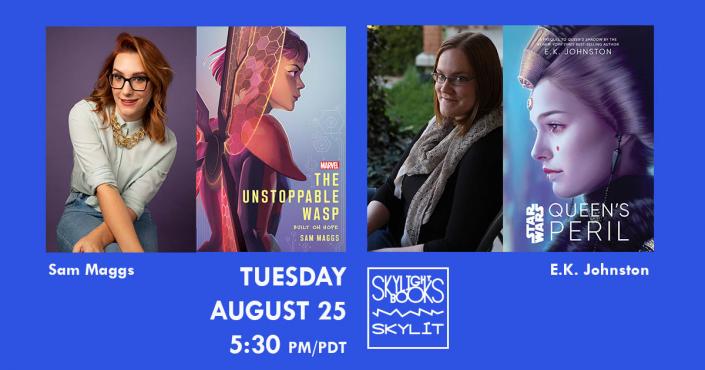 Nadia Van Dyne is new to this. New to being a Super Hero, new to being a real friend and stepdaughter (to one of the founding Avengers, no less), new to running her own lab, and new to being her own person, far, far away from the clutches of the Red Room-the infamous brainwashing/assassin-training facility. She’s adjusting well to all of this newness, channeling her energy into being a good friend, a good scientist, and a good Super Hero. It’s taking a toll, though, and Nadia’s finding that there are never quite enough hours in a day. So, when she’s gifted a virtual assistant powered by the most cutting-edge A.I. technology that the world has to offer, Nadia jumps at the opportunity to “do less, experience more”-just like the advertisements say.

The device works-really works. Nadia has more time to pursue her passion projects and to focus on new discoveries. But it’s never quite that simple, and not everything is as it seems. This thrilling adventure finds Nadia confronting her past as she tries to shape her future, and learning that sometimes the best way to effect big change is to think small-maybe even super small, Unstoppable Wasp-style. She’ll need the help of her genius G.I.R.L. (Genius In action Research Labs) squad and found family to save herself and (not to be too dramatic) the entire world as we know it. Along the way, Nadia discovers that when she teams up with the people who love her the most, they’re totally Unstoppable. Just another day in the life of your way, way above average teenage Super Hero.

Sam Maggs is a bestselling author of books, comics, and video games. She’s been a senior games writer, including work on Marvel’s Spider-Man; the author of many YA and middle-grade books like The Unstoppable Wasp, Con Quest!, Tell No Tales, and The Fangirl’s Guide to the Galaxy; and a comics writer for beloved titles like Marvel Action: Captain Marvel, My Little Pony, and Transformers. She is also an on-air host for networks like Nerdist. A Canadian in Los Angeles, she misses Coffee Crisp and bagged milk.

E.K. Johnston had several jobs and one vocation before she became a published writer. If she’s learned anything, it’s that things turn out weird sometimes, and there’s not a lot you can do about it. Well, that and how to muscle through awkward fanfic because it’s about a pairing she likes. Her books range from contemporary fantasy (The Story of Owen, Prairie Fire), to fairy-tale reimaginings (A Thousand Nights, Spindle), from hopeful sci-fi to quiet epic fantasy (That Inevitable Victorian Thing, The Afterward), and from small town Ontario (Exit, Pursued By A Bear), to a galaxy far, far away (Star Wars: Ahsoka, Queen’s Shadow, Queen’s Peril). She has no plans to rein anything in.

The Fangirl's Guide to the Galaxy: A Handbook for Girl Geeks (Hardcover)

Jem and the Holograms: Dimensions (Paperback)

The Story of Owen: Dragon Slayer of Trondheim (Paperback)

Exit, Pursued by a Bear (Paperback)