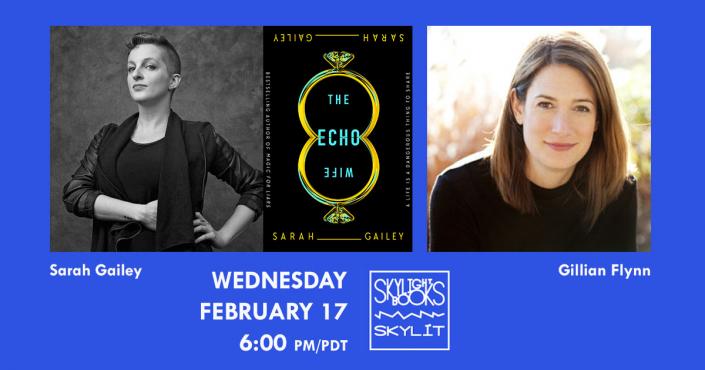 Meet renowned scientist Evelyn Caldwell. She’s highly decorated for the strides she’s made when it comes to genetic replicas and cloning, and has even accomplished creation of replicas. Unfortunately, all is not as well at home—she’s recently discovered that her husband, Nathan, has been having an affair. To make matters worse, the affair is with Evelyn’s own genetically cloned replica. After a morning that begins with a confrontation and ends with Nathan’s body bleeding out on the kitchen floor, the two Caldwell wives will have to think fast—before sharing everything includes sharing a jail cell.

Advance praise for The Echo Wife:

"A razor-sharp psychological thriller... Gailey's expertise with suspense and their success in presenting the reader with impossible choices about the ethics of cloning, biological programming and editing, and of Evelyn’s specific, difficult situation, will leave the reader thinking about the novel long after the final page."—Booklist, starred review

"For those familiar with Gailey's work, expect this one to offer familiar pleasures and some new surprises. And for those who aren't, well, get ready." —Entertainment Weekly

"Creepy, exhilarating science fiction... A series of dark reveals that leave both the characters and the audience reeling. Readers won't want to put this one down." —Publisher's Weekly

“A tight, thrilling and funny ride...Gailey’s writing is controlled, visceral and especially dazzling when Martine and Evelyn are in a room together. Fans of “Big Little Lies,” The Island, Frankenstein and “Killing Eve” will love this gripping, skillfully told firecracker of a book." —Bookpage

Hugo Award-winning and bestselling author Sarah Gailey is an internationally published writer of fiction and nonfiction. Their nonfiction has been published by Mashable and The Boston Globe, and they won a Hugo Award for Best Fan Writer. Their fiction credits include Vice and The Atlantic. Their debut novella, River of Teeth, was a 2018 finalist for both the Hugo and Nebula Awards. Their bestselling adult novel debut, Magic For Liars, was published in 2019.

Gillian Flynn is the author of the runaway hit Gone Girl, an international sensation that has spent more than 95 weeks on the New York Times bestseller list. Her work has been published in 40 languages. Gone Girl is a major motion picture from Twentieth Century-Fox. Flynn’s previous novels, Dark Places and Dagger Award winner Sharp Objects, were also New York Times bestsellers. A former writer and critic for Entertainment Weekly, she lives in Chicago with her husband and children.

Magic for Liars: A Novel (Paperback)

When We Were Magic (Hardcover)