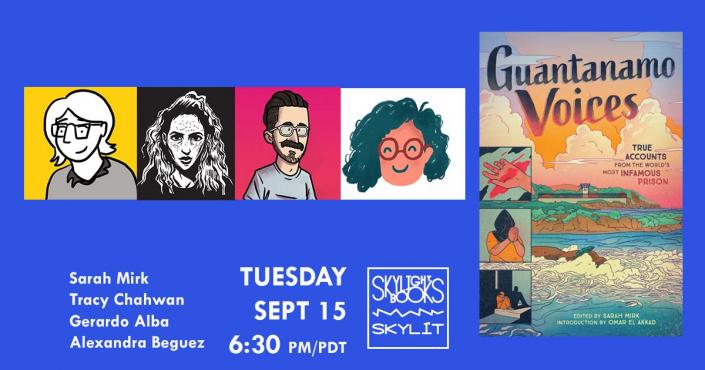 Please note: This event will take place live on Crowdcast. RSVP here to save your spot!

In January 2002, the United States sent a group of Muslim men they suspected of terrorism to a prison in Guantánamo Bay. They were the first of roughly 780 prisoners who would be held there—and 40 inmates still remain. Eighteen years later, very few of them have been ever charged with a crime.

In Guantánamo Voices, journalist Sarah Mirk and her team of diverse, talented graphic novel artists tell the stories of ten people whose lives have been shaped and affected by the prison, including former prisoners, lawyers, social workers, and service members. This collection of illustrated interviews explores the history of Guantánamo and the world post-9/11, presenting this complicated partisan issue through a new lens.

“An eye-opening, damning indictment of one of America’s worst trespasses that continues to this day.”

Sarah Mirk is a multimedia journalist whose work focuses on telling nuanced, human-focused stories. She is an editor of The Nib and the former online editor of national feminism and pop-culture magazine Bitch Media. She lives in Portland, Oregon.

Tracy Chahwan is a comic book artist and illustrator. Her first graphic novel Beirut Bloody Beirutis published by Hachette (collection Marabulles) in France. Besides that, she has workedon multiple short comics, including Stray Girls (Waraq, 2017), Don’t you know who my mother is? (Samandal, 2017), and The Suicide. She lives in Beirut, Lebanon.

Gerardo Alba is a cartoonist from Mexico City whose work ranges from journalism to slice-of-life and fantasy. He’s the art director of Little Red Bird, a small-press comics publisher. He currently lives in Belmar, NJ with his wife and 2 cats, where they all constantly indulge in bagels and watching hockey.

Alexandra Beguez is a Cuban-American illustrator and cartoonist based in New Jersey. Her comics and illustrations appear in Little Nemo: Dream Another Dream, The Nib, The Believer Magazine, Longreads, and Buzzfeed, among others.

Be Gay, Do Comics (Paperback)