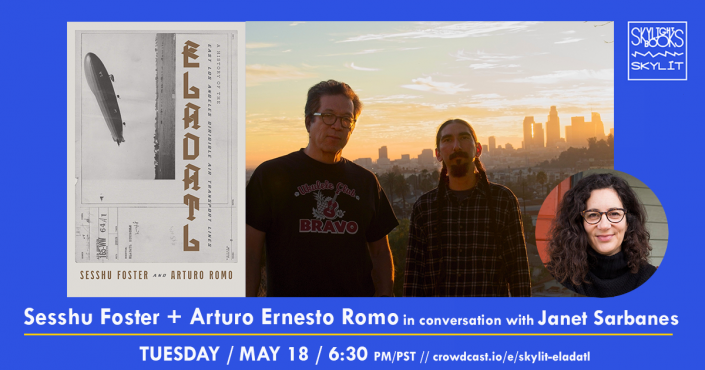 A breathtaking free fall into the long-buried (and fictional) history of a utopian era in American lighter-than-air travel, as told by its death-defying, aero-acrobatic heroes.

In the early years of the twentieth-century, the use of airships known as dirigibles—some as large as one thousand feet long—was being promulgated in Southern California by a semi-clandestine lighter-than-air movement. Groups like the East LA Balloon Club and the Bessie Coleman Aero Club were hard at work to revolutionize travel, with an aim to literally lift oppressed people out of racism and poverty.

ELADATL tells the story of this little-known period of American air travel in a series of overlapping narratives told by key figures, accompanied by a number of historic photographs and recently discovered artifacts, with appendices provided to fill in the missing links. The story of the rise and fall of this ill-fated airship movement investigates its long-buried history, replete with heroes, villains, and moments of astonishing derring-do and terrifying disaster.

Written and presented as an "actual history of a fictional company," this surrealist, experimental novel is a tour de force of politicized fantastic fiction, a work of hybrid art-making distilled into a truly original literary form. Developed over a ten-year period of collaborations, community interventions, and staged performances, ELADATL is a hilarious send-up of academic histories, mainstream narratives, and any traditional notions of the time-space continuum.

"Foster and Romo's 'real fake dream' of the future-past history of the East Los Angeles Dirigible Air Transport Lines is a superb and loving phantasmagoria that gobbles up real histories for breakfast and spits out the seeds. It has everything you could wish for, academic satire, crazy sculpture in the desert, sex, violence, falafel, graffiti, and zeppelin chase scenes." – Jonathan Lethem, author of Motherless Brooklyn

"ELADATL: A History of the East Los Angeles Dirigible Air Transport Lines is one of the wildest, most creative and deeply-cutting novels I've read in years, a genuine piece of newness in both content and form. Sesshu Foster and Arturo Romo have managed, from the mind-bending perch of alternate time and space, to construct a perfect lookout from which to view the deranged spectacle of late-capitalism America. To wade through this surreal narrative archeology—composed of everything from oral histories to inspirational posters to lunch menus—is to experience, in the finest sense, literature as fever dream."—Omar El Akkad, author of American War: A Novel

"Forget the zombie apocalypse, forget priapic gun-crazy Hollywood dystopias—all these troubled times require is an economy ticket on the East L.A. Dirigible Air Transport Lines. Enter the isotherm with Foster and Romo and cruise high over the trashed and blasted landscapes of imperial decay. ELADATL is more than a novel—it's the secret history of the secret history, the map they always kept hidden, a dream inside a dream of a dream. Hilarious and prophetic and profound, truer than truth, and realer than all realities currently available for purchase, ELADATL is strong medicine against the erasures of history, a mega-vitamin for struggles yet to come. This book combats despair."—Ben Ehrenreich, author of Desert Notebooks: A Road Map for the End of Time

Sesshu Foster taught composition and literature in East L.A. for over 20 years, and at the University of Iowa, the California Institute for the Arts, and the University of California, Santa Cruz. His work is published in The Oxford Anthology of Modern American Poetry, Language for a New Century: Poetry from the Middle East, Asia and Beyond, and State of the Union: 50 Political Poems. His most recent books are City of the Future, poetry; World Ball Notebook, poetry; and Atomik Aztex, a novel. A celebrated writer, his literary awards are numerous: Sesshu was awarded the American Book Award and the Asian American Literary Award in Poetry for World Ball Notebook; the Believer Book Award for Atomik Aztex; an American Book Award for Invocation LA: Urban Multicultural Poetry; and finalist for the PEN Center West Poetry Prize, as well as the Paterson Poetry Prize, for City Terrace Field Manual.  Sesshu is based in Alhambra, CA.

Arturo Ernesto Romo was born in Los Angeles, California in 1980. His artwork, mostly collaborative mixed media works but also drawing, has been circulated internationally. Fluency, agency and folly are central themes in his practice; he sees his artwork as a companion multiplier, folding folds, netting nets. His art-making is pushed through explorations on the streets of East and North East Los Angeles, which feed into an ongoing series of collaborations with writer Sesshu Foster. He is based in Alhambra, CA.

Janet Sarbanes is the author of the short story collections Army of One and The Protester Has Been Released. The recipient of a 2017 Creative Capital/Andy Warhol Foundation art writer’s grant, she has published art criticism and other critical essays in museum catalogues, anthologies and journals. Her essay collection, Letters on the Autonomy Project in Art and Politics, is forthcoming from Punctum Books, and her review of ELADATL appears in the April issue of Boom. Janet teaches in the MFA Creative Writing Program and the MA in Aesthetics and Politics at CalArts.