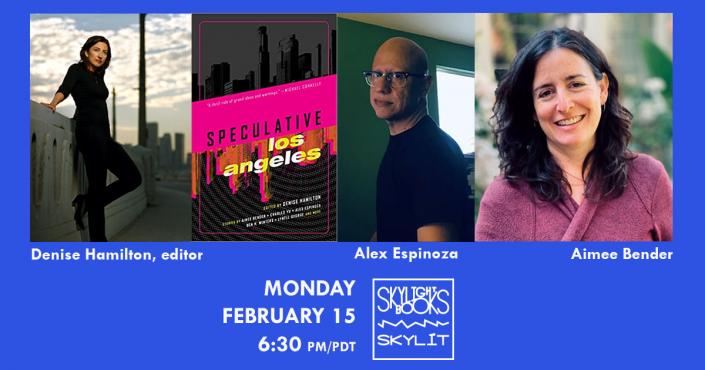 As an incubator of the future, Los Angeles has long mesmerized writers from Aldous Huxley to Octavia E. Butler. With its natural disasters, Hollywood artifice, staggering wealth and poverty, and urban sprawl, one can argue that Los Angeles is already so weird, surreal, irrational, and mythic that any fiction emerging from this place should be considered speculative. So, bestselling author Denise Hamilton commissioned fourteen stories (including one of her own) and did exactly that. In Speculative Los Angeles, some of the city’s most prophetic and diverse voices reimagine the metropolis in very different ways.

As with our city-based Akashic Noir Series, each story in Speculative Los Angeles is set in a distinct neighborhood filled with local color, landmarks, and flavor. Since the best speculative fiction provides a wormhole into other worlds while also commenting on our own, that is exactly what you’ll find here.

Edgar Award finalist DENISE HAMILTON is the author of seven crime novels and the editor of the best-selling anthology Los Angeles Noir (which includes the Edgar Award–winning short story “The Golden Gopher” by Susan Straight) and Los Angeles Noir 2: The Classics. She is a former Los Angeles Times journalist, a Fulbright Scholar, a noir and sci-fi/fantasy geek, and a proud LA native who refuses to speak only in English. She is the editor of Speculative Los Angeles.

Alex Espinoza was born in Tijuana, Mexico to parents from the state of Michoacán and raised in suburban Los Angeles. In high school and afterwards, he worked a series of retail jobs, selling everything from eggs and milk to used appliances, custom furniture, rock T-shirts, and body jewelry. After graduating from the University of California-Riverside, he went on to earn an MFA from UC-Irvine’s Program in Writing. His first novel, Still Water Saints, was published by Random House in 2007 and was named a Barnes and Noble Discover Great New Writers Selection. The book was released simultaneously in Spanish, under the title Los santos de Agua Mansa, California, translated by Lilliana Valenzuela. His second novel, The Five Acts of Diego León, was also published by Random House in March 2013. His newest book is Cruising: An Intimate History of a Radical Pastime, which was published by The Unnamed Press in June, 2019. Alex is the Tomás Rivera Endowed Chair of Creative Writing at UC Riverside.

Aimee Bender is the author of six books: The Girl in the Flammable Skirt (1998) which was a NY Times Notable Book, An Invisible Sign of My Own (2000) which was an L.A. Times pick of the year, Willful Creatures (2005) which was nominated by The Believer as one of the best books of the year, The Particular Sadness of Lemon Cake (2010) which won the SCIBA award for best fiction, and an Alex Award, The Color Master, a NY Times Notable book for 2013, and her latest novel, The Butterfly Lampshade, which came out in July 2020, and was longlisted for the PEN/Jean Stein Award. Her books have been translated into sixteen languages. Her short fiction has been published in Granta, GQ, Harper’s, Tin House, McSweeney’s, The Paris Review, and more, as well as heard on PRI’s “This American Life”and “Selected Shorts”. She lives in Los Angeles with her family, and teaches creative writing at USC.

Cruising: An Intimate History of a Radical Pastime (Paperback)

The Butterfly Lampshade: A Novel (Hardcover)

An Invisible Sign of My Own: A Novel (Paperback)

The Girl in the Flammable Skirt: Stories (Paperback)