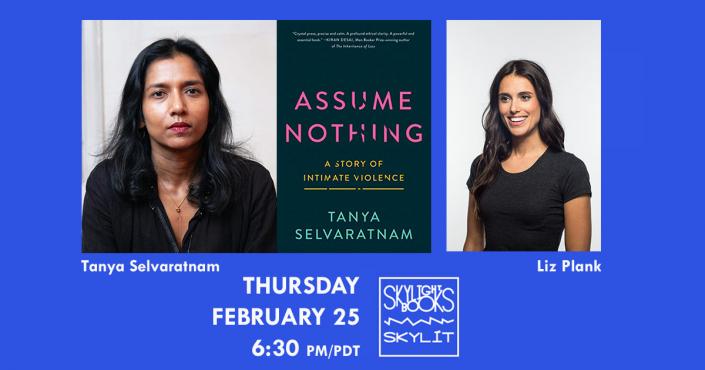 *Please note: this event will take place live on Crowdcast, co-hosted by The Meteor. Register here to join the livestream or watch the replay.

Join Tanya Selvaratnam and The Meteor's Liz Plank as they present Tanya's newest book ASSUME NOTHING: A STORY OF INTIMATE VIOLENCE.

Assume Nothing: A Story of Intimate Violence (Harper)

When Tanya Selvaratnam met then New York State Attorney General Eric Schneiderman at the Democratic National Convention in July 2016, they seemed like the perfect match. Both were Harvard alumni; both studied Chinese; both were interested in spirituality and meditation, both were well-connected rising stars in their professions—Selvaratnam in entertainment and the art world; Schneiderman in law and politics.

Behind closed doors, however, Tanya’s life was anything but ideal. Schneiderman became controlling, mean, and manipulative. He drank heavily and used sedatives. Sex turned violent, and he called Tanya—who was born in Sri Lanka and grew up in Southern California—his “brown slave.” He isolated and manipulated her, even threatening to kill her if she tried to leave.

Twenty-five percent of women in America are victims of domestic abuse. Tanya never thought she would be a part of this statistic. Growing up, she witnessed her father physically and emotionally abuse her mother. Tanya knew the patterns and signs of domestic violence, and did not see herself as remotely vulnerable. Yet what seemed impossible was suddenly a terrifying reality: she was trapped in a violent relationship with one of the most powerful men in New York.

Sensitive and nuanced, written with the gripping power of a dark psychological thriller, Assume Nothing details how Tanya’s relationship devolved into abuse, how she found the strength to leave—risking her career, reputation, and life—and how she reclaimed her freedom and her voice. In sharing her story, Tanya analyzes the insidious way women from all walks of life learn to accept abuse, and redefines what it means to be a victim of intimate violence.

Praise for Assume Nothing:

"Assume Nothing is a harrowing story of the illusions we live with about power and authority and the splits between our public and private selves. This book illustrates how vulnerable we all are; even those who outwardly seem so strong have ancient fractures, points of entry where we are susceptible to the debilitating darkness of others." -A.M. Homes, author of The Mistress’s Daughter and May We Be Forgiven

"Assume Nothing is a searing account of Tanya Selvaratnam’s relationship with one of the most powerful men in New York. In lucid prose, she recounts the confusion of signals—the loving embrace turned choke hold—and her struggle to reclaim her voice and power. This book is a necessary and important addition to the conversation around #MeToo—and a gift to women everywhere." -Danzy Senna, author of CAUCASIA and NEW PEOPLE

Tanya Selvaratnam is the author of The Big Lie: Motherhood, Feminism, and the Reality of the Biological Clock. Her essays have been published in the New York Times, Vogue, SheKnows, The Art Newspaper,Glamour, McSweeney's Internet Tendency, and on CNN, and she has been a fellow at Yaddo and Blue Mountain Center. She is an Emmy-nominated and Wehby-winning Filmmaker, and she has been a producer for Aubin Pictures, For Freedoms, Glamour Women of the Year, the Meteor, Planned Parenthood, and the Vision & Justice Project.

Liz Plank is an award-winning journalist, author and the executive producer and host of several critically acclaimed digital series at Vox Media and NBC News. She’s the CEO of Liz Plank Productions and is a columnist for MSNBC and has been listed as one of Forbes’ 30 Under 30, Mediaite’s Most Influential in News Media, and Marie Claire’s Most Powerful Women, and was named one of the World’s Most Influential People in Gender Policy by Apolitical. She’s built a loyal following on numerous social media platforms, but her proudest accomplishment by far remains being blocked by the 45th president of the United States.

The Meteor are a group of journalists, artists, filmmakers and media leaders who believe in the power of words, images and stories to advance gender and racial justice and equity—and transform the world. The Meteor produces live events, films, audio content and more, and while they will launch officially in 2021, you can see some of their early work here.

Assume Nothing: A Story of Intimate Violence (Hardcover)

The Big Lie: Motherhood, Feminism, and the Reality of the Biological Clock (Paperback)

For the Love of Men: From Toxic to a More Mindful Masculinity (Paperback)