LIVE ON CROWDCAST: TERESA CARMODY discusses her novel THE RECONCEPTION OF MARIE with CONNIE SAMARAS 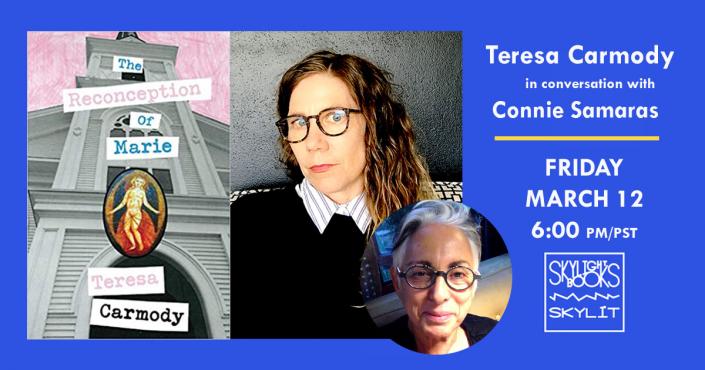 The Reconception of Marie (Spuyten Duyvil)

Sexually curious and intellectually adventurous, adolescent Marie begins journaling about her life in Western Michigan’s Bible Belt during the rise of the Christian Right. Over the span of many years, her writing becomes a meditation on the ways in which language makes, unmakes, and remakes us. In The Reconception of Marie, Marie’s many voices coalesce in a reimagined bildüngsroman, where coming-of-age becomes coming-into-awareness, a spiritual quest navigated with humor, fervency, and the multivalency of queer grace.

Praise for The Reconception of Marie:

"In this fresh take on the classic bildungsroman, Teresa Carmody brings us into the hybrid world of Marie, a protagonist as indoctrinated as she is intelligent, and deeply questioning as she is opinionated—and in an unforgettable voice, we charge into battle for the salvation of nothing less than Marie’s eternal soul. Her voice is equally satirical and tender as it queries what it means to be led astray, to save and be saved, to have faith and yet to sin, to seek truth, and to think and create independently given the confines of language one has inherited. Endearing, uproariously funny, and profoundly moving, this is a book and a character you won’t forget." - Sarah Gerard, author of True Love and Sunshine State

"This is a rare and captivating story about the growth of self-awareness in an American girl. Raised in an Evangelical Christian household, Marie is eager, as we all are, to believe that she matters. In a scheme of illogical hope, she evolves into dazzling complexity.  Her social and familial influences rise and fall in tune with the milieu. She fights to know truth and to stay clear, and this is where her struggle remains from beginning to end.  I think of Iris Murdoch and her kind of comedy. To be born again is not to re-conceive, but they’re awfully close." - Fanny Howe

"Sharp, funny and devastating, this coming of age tale of a young queer girl in the Christian far right community of Michigan is essential reading for anyone who has ever felt like a misfit. Through shifting perspectives and forms, Carmody deftly captures the complexities of faith, family, class, girlhood—how they make and break us—and the cataclysm of reconceiving who we are. Hers is a vital and singular voice." - Mona Awad, author of Bunny and Thirteen Ways Of Looking At A Fat Girl

"A remarkable and complex portrayal of one girl’s spiritual reconception and a 'leap into the void of not-knowing,' Carmody brilliantly weaves together a heartbreaking journey of spiritual healing through the earnest and compelling voice of Marie, a born-again Christian girl whose largeness of heart is matched only by the bigness of God himself. A beautiful and vulnerable witnessing of finding oneself, this is a book that opens itself to you, and consequently, you to the rest of yourself." - Janice Lee, author of Imagine A Death and Reconsolidation

"The Reconception of Marie, Teresa Carmody’s stirring new novel, immerses us in her eponymous narrator’s Catholic girlhood in late 1980s Michigan, only reconceived—transformed—by evangelical Christianity. Whether Marie is negotiating middle-school social dynamics or a faith-challenging personal crisis, Carmody skillfully guides us through in a voice that is cannily naive at times, yet bracingly profound at others, and offers portraits of characters and a world still little seen in American literature but, in her hands and vision, not soon forgotten." - John Keene, author of Counternarratives

"At one point, prophetically, Marie says, 'Maybe salvation is like a fresh new supply of maxi-pads.' Here is a mysticism my soul understands. Wondering what to get Joan of Arc for her birthday this year? This book. Also magic, the way it tracks us. And knows us before we know (see: tarot card XI, Justice). I would classify this book as red conjuration. Really, only this: I would like to convert to the Church of Marie, where the past, present, and future agree to disagree in the name of radiance. And too —these five words,  the most extraordinary words I know, 'For she began to write.' The Reconception of Marie is a stunning book." - Selah Saterstrom, author of Ideal Suggestions and Slab

"Teresa Carmody’s The Reconception of Marie strikes a wondrous balance between comic absurdity and a tight grasp of the cost of rules, especially when rules are random and erratic. It’s also a sly critique of the ancient human drive to turn the inscrutable into a force that can be known, controlled, and used against others. A beautiful, alive record of one mind coming into being, but not through any way you’d expect." - Paul Lisicky, author of Later: My Life At The Edge Of The World

Teresa Carmody’s writing includes fiction, creative nonfiction, inter-arts collaborations, and hybrid forms. She is the author of three books and four chapbooks, including Maison Femme: a fiction (2015) and The Reconception of Marie (2020). Her work has appeared in The Collagist, LitHub, WHR, Two Serious Ladies, Diagram, St. Petersburg Review, Faultline, and was selected for the &NOW Awards: The Best Innovative Writing and by Entropy for its Best Online Articles and Essays list of 2019. Carmody is co-founding editor of Les Figues Press, an imprint of LARB Books in Los Angeles, and director of Stetson University’s MFA of the Americas.

Connie Samaras lives and works in Los Angeles. She was born in Albuquerque, New Mexico. Working primarily in photography and video, she employs a variety of interdisciplinary frames and aesthetic strategies in developing projects. Her ongoing interests include: the variable membrane between fiction and real world; political geographies and psychological dislocation in the everyday; speculative landscapes and architectural narratives; science fiction genres and future imaginaries; the legacy of U.S. social change movements in a shifting global economy; paradox and the political unconscious; desire, popular culture, feminist and queer theory; art as historical artifact, the aesthetics of time, and differing systems of cataloguing history. In addition to an extensive record of art exhibitions, lectures, reviews, and awards, she’s also published writings, narrative and critical, on a range of topics.

The Reconception of Marie (Paperback)