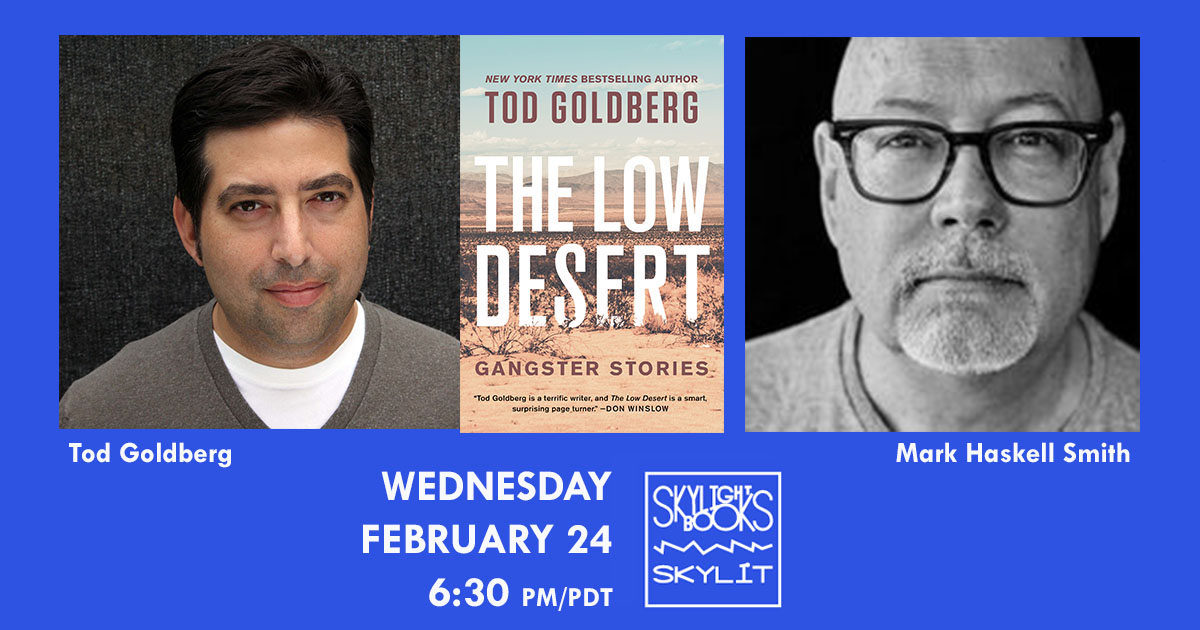 With gimlet-eyed cool and razor-sharp wit, these spare, stylish stories from a master of modern crime fiction assemble a world of gangsters and con men, of do-gooders breaking bad and those caught in the crossfire. The uncle of an FBI agent spends his life as sheriff in different cities, living too close to the violent acts of men; a cocktail waitress moves through several desert towns trying to escape the unexplainable loss of an adopted daughter; a drug dealer with a penchant for karaoke meets a talkative lawyer and a silent clown in a Palm Springs bar.

Witty, brutal, and fast-paced, these stories expand upon the saga of Chicago hitman-turned-Vegas-rabbi Sal Cupertine–first introduced in Gangsterland and continued in Gangster Nation–while revealing how the line between good and bad is often a mirage.

Praise for The Low Desert:

“Tod Goldberg is a terrific writer, and The Low Desert is a smart, surprising page turner.” —Don Winslow

"Engaging and supremely satisfying from the first page to the last." —Lawrence Block

"The wild west is alive in The Low Desert, a collection of stories as brutal and compelling as the landscape itself." —Brad Meltzer

"By turn surreal, tragic, and darkly funny, the 12 stories in this exquisite collection from Goldberg hold up a mirror to the unique landscape of Southern California’s Inland Empire . . . With a cast of low-rent mobsters, drifters, and hardscrabble working stiffs, Goldberg does a brilliant job of revealing the underbelly of the area, past and present. These spare slices of literary noir are the work of a master storyteller." —Publishers Weekly (starred review)

"These are stories Elmore Leonard would love—not just because the razor-sharp Goldberg wastes no words in cutting to the heart of his stories, but also because he highlights the humanity and inner lives of even his most bent characters . . . A thoroughly enjoyable collection by a bona fide original." —Kirkus Reviews (starred review)

"Like Mario Puzo, Goldberg understands that the way to write about organized crime is to write about the people who live in that world. Yes, they are criminals, but most of them aren't villains. A sterling collection that showcases the author’s gifts as a storyteller." —Booklist

"Tod Goldberg . . . has written a collection of stories that are keenly observed, wryly funny, and heart-wrenching in equal measure. If wisdom can be gleaned from taking a sharp look at the human impulse toward violence, then Tod Goldberg is one of this nation’s sagest storytellers." —Attica Locke, author of Heaven, My Home

Tod Goldberg is the author of more than a dozen books, including Gangsterland, a finalist for the Hammett Prize; Gangster Nation; The House of Secrets, coauthored with Brad Meltzer; and Living Dead Girl, a finalist for the Los Angeles Times Book Prize. His writing has appeared in the Los Angeles Times, The Wall Street Journal, Los Angeles Review of Books, Las Vegas Weekly, and The Best American Essays, among other publications. He lives in Indio, California, where he directs the low-residency MFA in creative writing and writing for the performing arts at the University of California, Riverside.

Mark Haskell Smith is the author of six novels with one word titles including Moist and Blown; as well as the non-fiction books Heart of Dankness and Naked at Lunch.  A new nonfiction title: Rude Talk in Athens: Comedy, Democracy, and the Most Important Writer You've Never Heard Of is forthcoming in August 2021 from Unnamed Press.

Naked at Lunch: A Reluctant Nudist's Adventures in the Clothing-Optional World (Paperback)