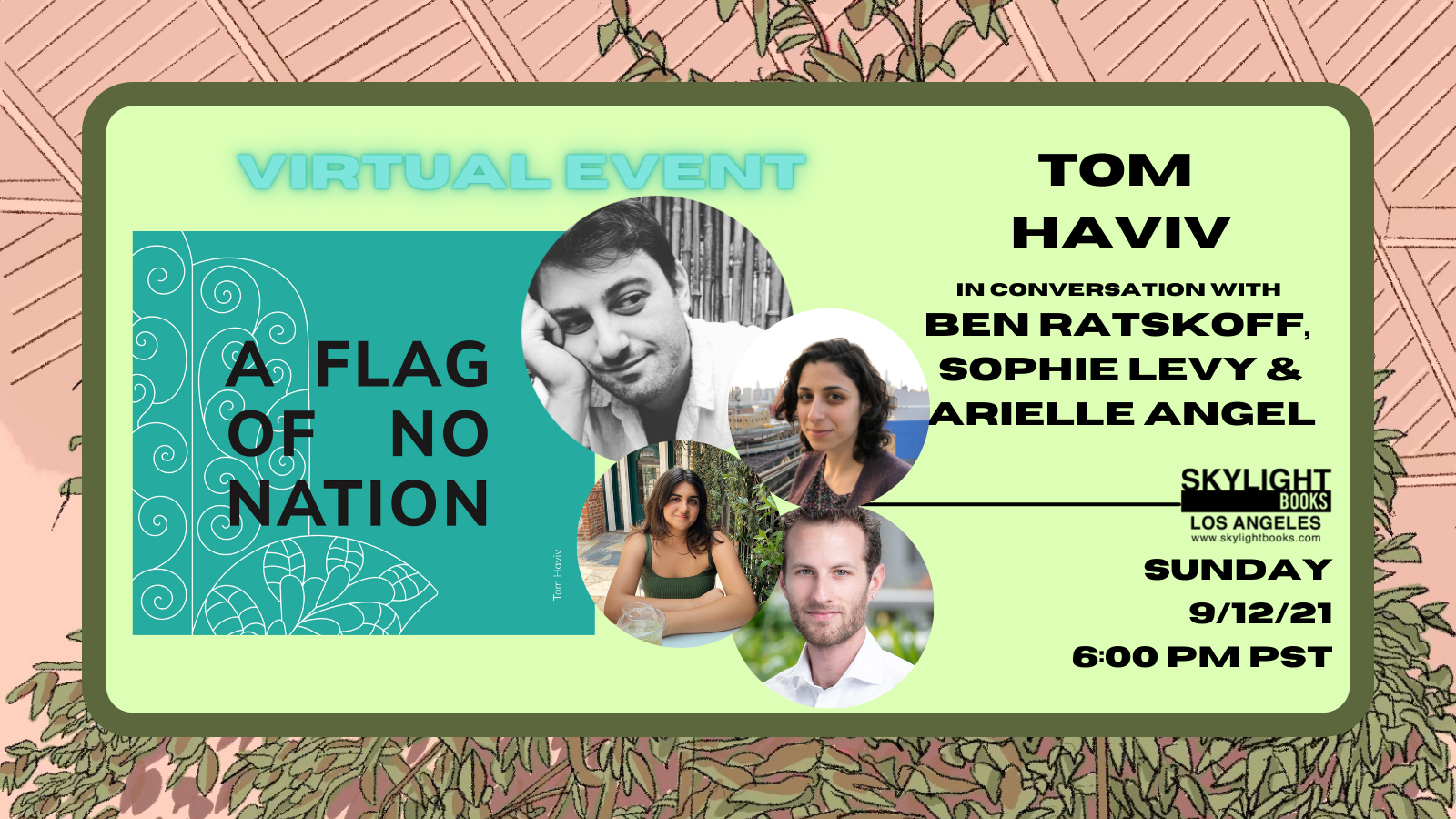 A Flag of No Nation (Jewish Currents Press)

The histories of Sephardic Jews are just beginning to be written and A Flag of No Nation is a monumental contribution to these essential stories. A meditation on world invention and collapse, A Flag of No Nation traces the stories of Turkish Jews in the 20th century, blind colonists in a white ocean, and performers enacting new rituals around a nationless flag. Through forms of storytelling that range from allegory to oral history, Tom Haviv investigates the history of Israel⏐Palestine and the mythologies of nationalism. A warning against imperfect dreams, and invitation to imagine something new, A Flag of No Nation reminds us how the act of remembrance can help us re-envision the future.

Tom Haviv is a writer, multimedia artist, and organizer based in Brooklyn and born in Israel. A Flag of No Nation is his debut book of poetry. He is the creator of the Hamsa Flag, a project designed to stimulate conversation about the future of Israel⏐Palestine, Mizrahi/Sephardi culture, and Jewish/Muslim solidarity. Tom is also the co-founder of Ayin Press and the author of a children’s book called Woven. Tom organizes with the New York City community group Jews for Racial & Economic Justice (JFREJ), where he is an active member of their Mizrahi/Sephardi Caucus.

Ben Ratskoff is a Los Angeles-based writer and scholar. He is the founder and editor-in-chief of Jewish arts and politics journal PROTOCOLS.

Sophie Levy is an editor, writer, and artist based in New York City. She is the founder and Editor-In-Chief of ZAMAN Collective, an online arts and writing platform dedicated to Mizrahi Jewish cultures, history, and current affairs. She holds a BA in Art History / Visual Arts and Jewish Studies from Barnard College.

Arielle Angel is the Editor-in-Chief of Jewish Currents.

Praise for A Flag of No Nation:

“Tom Haviv’s relentlessly inventive first collection offers a fresh and moving reckoning with the charged nature of his family’s Levantine-Jewish identity. Weaving a hybrid text out of a richly complex tale, Haviv makes his personal story come to stand for a much larger history, one that is, as he shows here — politically and poetically — re-membered best by being broken open.” —Peter Cole, author of Hymns & Qualms: New and Selected Poems and Translations

“Tom Haviv’s A Flag of No Nation gives image and language to places and peoples that were not only lost and forgotten, but forced to be forgotten, othered, and shamed. The starting point of the writer’s journey asking his grandmother ‘Where are you from?’ is answered throughout the text beautifully and delicately, giving again and again the opportunity to be in that place where the poem comes from, where the image is caught so wonderfully, where this conversation still continues.” —Tehila Hakimi, author of Company and We’ll Work Tomorrow

“In this remarkable first collection, we are shown history is built from stories. We learn who tells, who’s told, and how it’s told makes all the difference. A Flag of No Nation refigures or recalls the poet as mythmaker, as archivist and historian, as the living pulse that links these things together through the human breath. In these formally inventive and deeply felt poems, Tom Haviv bears witness through inherited narratives, text, and emails. This is a living and essential book.” —sam sax, author of Bury It and Madness

A Flag of No Nation