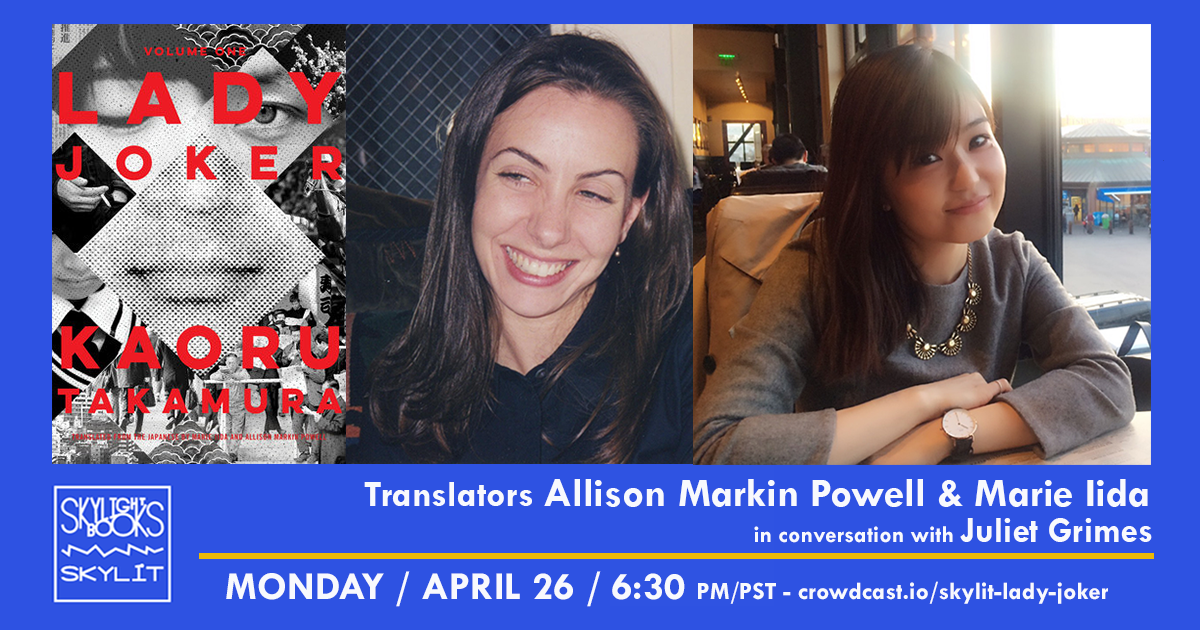 Skylight Books is delighted to present translators Marie Iida and Allison Markin Powell in conversation about Lady Joker by Kaoru Takamura, in partnership with the Transnational Literature Series.

One of Japan’s great modern masters, Kaoru Takamura, makes her English-language debut with this two-volume publication of her magnum opus.

Tokyo, 1995. Five men meet at the racetrack every Sunday to bet on horses. They have little in common except a deep disaffection with their lives, but together they represent the social struggles and griefs of post-War Japan: a poorly socialized genius stuck working as a welder; a demoted detective with a chip on his shoulder; a Zainichi Korean banker sick of being ostracized for his race; a struggling single dad of a teenage girl with Down syndrome. The fifth man bringing them all together is an elderly drugstore owner grieving his grandson, who has died suspiciously after the revelation of a family connection with the segregated buraku community, historically subjected to severe discrimination.

Intent on revenge against a society that values corporate behemoths more than human life, the five conspirators decide to carry out a heist: kidnap the CEO of Japan’s largest beer conglomerate and extract blood money from the company’s corrupt financiers.

Inspired by the unsolved true-crime kidnapping case perpetrated by “the Monster with 21 Faces,” Lady Joker has become a cultural touchstone since its 1997 publication, acknowledged as the magnum opus by one of Japan’s literary masters, twice adapted for film and TV and often taught in high school and college classrooms.

Marie Iida has served as an interpreter for the New York Times best-selling author Marie Kondo's Emmy-nominated Netflix documentary series, Tidying Up with Marie Kondo. Her non-fiction translations have appeared in Nang, MoMA Post, Eureka and over half a dozen monographs on contemporary Japanese artists and architects, including Yayoi Kusama, Toyo Ito, and Kenya Hara for Rizzoli New York. Marie currently writes a monthly column for Gentosha Plus about communicating in English as a native Japanese speaker.

Allison Markin Powell is a literary translator, editor, and publishing consultant. She has been awarded grants from English PEN and the NEA, and the 2020 PEN America Translation Prize for The Ten Loves of Nishino by Hiromi Kawakami. Her other translations include works by Osamu Dazai, Kanako Nishi, and Fuminori Nakamura. She was the guest editor for the first Japan issue of Words Without Borders, and she maintains the database Japanese Literature in English.

“A novel that portrays with devastating immensity how those on the dark fringes of society can be consumed by the darkness of their own hearts.”
—Yoko Ogawa, author of The Memory Police