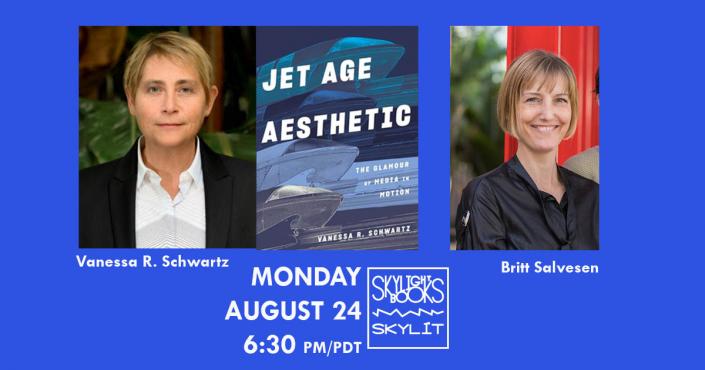 A stunning look at the profound impact of the jet plane on the mid-century aesthetic, from Disneyland to Life magazine

Vanessa R. Schwartz engagingly presents the jet plane’s power to define a new age at a critical moment in the mid-20th century, arguing that the craft’s speed and smooth ride allowed people to imagine themselves living in the future. Exploring realms as diverse as airport architecture, theme park design, film, and photography, Schwartz argues that the jet created an aesthetic that circulated on the ground below.

Visual and media culture, including Eero Saarinen’s airports, David Bailey’s photographs of the jet set, and Ernst Haas’s experiments in color photojournalism glamorized the imagery of motion. Drawing on unprecedented access to the archives of The Walt Disney Studios, Schwartz also examines the period’s most successful example of fluid motion meeting media culture: Disneyland. The park’s dedication to “people-moving” defined Walt Disney’s vision, shaping the very identity of the place. The jet age aesthetic laid the groundwork for our contemporary media culture, in which motion is so fluid that we can surf the internet while going nowhere at all.

“Decades before the Internet, there was the Jet Age. In this visually delicious study, Vanessa Schwartz returns to a time just before our own, when all that was solid took to the air and the future became as weightless as a cloud out the window. Just sit back and enjoy the ride. You'll be amazed at what you see.”
--Fred Turner, author of The Democratic Surround: Multimedia and American Liberalism from World War II to the Psychedelic Sixties

“Jet Age Aesthetic is a landmark achievement, laying the foundation for a new kind of critical history of the present.”
--W.J.T. Mitchell, author of What Do Pictures Want?

“Vanessa Schwartz's archaeology of the jet age has taught me that the railway journey of the nineteenth century was not the last word but rather the beginning of a new story.”
-Wolfgang Schivelbusch, author of The Railway Journey

“Gracefully written, engagingly narrated, and accompanied by brilliantly selected images, this is a book that anyone interested in the post-WWII world can read with pleasure and profit.”
--Edward Dimendberg, University of California, Irvine

“A dazzling and stylish journey through the art and culture of the jet age. Beautifully illustrated, this important book offers a new way of understanding the modernity of the 1950s and 1960s.”
--Lynda Nead, author of The Tiger in the Smoke: Art and Culture in Post-War Britain

“Jet Age Aesthetic is an exhilarating, timely call for new ways of thinking about media and mass culture. From airport design and Disneyland to movies and newsmagazines, Schwartz traces throughlines of aspiration and experience in the visual culture of the jet age.”
--Britt Salvesen, Los Angeles County Museum of Art

Vanessa R. Schwartz directs the Visual Studies Research Institute at USC, where she also teaches the history of modern visual culture of Europe and America in the nineteenth and twentieth centuries at USC, especially photography, film and other commercial arts. She is also the author of It’s So French! Hollywood, Paris and the Making of Cosmopolitan Film Culture (Chicago, 2007), Spectacular Realities: Early Mass Culture in fin-de-siècle Paris (Berkeley, 1998), Modern France: A Very Short Introduction (Oxford, 2011) and a number of edited volumes, including, with Jason Hill, Getting the Picture: The Visual Culture of the News (Bloomsbury, 2015).

Britt Salvesen joined LACMA in October 2009 as curator and head of the Wallis Annenberg Photography Department and the Prints and Drawings Department. Previously, she was director and chief curator at the Center for Creative Photography, University of Arizona. She received her MA from the Courtauld Institute of Art and her PhD from the University of Chicago. Her most recent curatorial project at LACMA was 3D: Double Vision, which opened at LACMA in July 2018 (named one of the best art exhibitions of 2018 by the Los Angeles Times).

Jet Age Aesthetic: The Glamour of Media in Motion (Hardcover)

It's So French!: Hollywood, Paris, and the Making of Cosmopolitan Film Culture (Paperback)

Getting the Picture: The Visual Culture of the News (Paperback)