LIVE ON CROWDCAST: V.E. SCHWAB on her new novel THE INVISIBLE LIFE OF ADDIE LARUE, with TAYLOR JENKINS REID 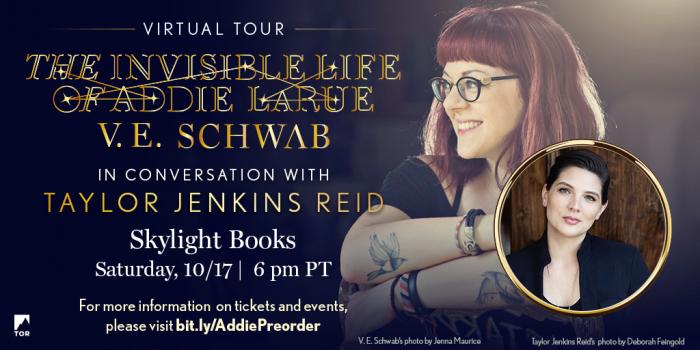 France, 1714: in a moment of desperation, a young woman makes a Faustian bargain to live forever—and is cursed to be forgotten by everyone she meets.

Thus begins the extraordinary life of Addie LaRue, and a dazzling adventure that will play out across centuries and continents, across history and art, as a young woman learns how far she will go to leave her mark on the world.

But everything changes when, after nearly 300 years, Addie stumbles across a young man in a hidden bookstore and he remembers her name.

Advance Praise for The Invisible Life of Addie Larue:

“For someone damned to be forgettable, Addie LaRue is a most delightfully unforgettable character, and her story is the most joyous evocation of unlikely immortality.”
— Neil Gaiman, author of American Gods and winner of multiple Nebula, Hugo, and Locus Awards

“Victoria Schwab sends you whirling through a dizzying kaleidoscopic adventure through centuries filled with love, loss, art and war — all the while dazzling your senses with hundreds of tiny magical moments along the way. The Invisible Life of Addie Larue will enchant readers as deeply as its heroine’s Faustian bargain; you will find yourself in quick turns both aching with heartbreak, and gleefully crowing at the truly delicious, wicked cleverness in store.”
— Naomi Novik, Nebula and Locus Award-winning author of Spinning Silver

“The Invisible Life of Addie LaRue is the kind of book you encounter only once in a lifetime. . . . A defiant, joyous rebellion against time, fate, and even death itself—and a powerful reminder that the only magic great enough to conquer all of it is love.”— Peng Shepherd, author of The Book of M

Victoria "V.E." Schwab is the #1 New York Times bestselling author of more than a dozen books, including the acclaimed Shades of Magic series, the Villains series, This Savage Song, and Our Dark Duet. Her work has received critical acclaim, been featured in the New York Times, Entertainment Weekly, Washington Post and more, been translated into more than a dozen languages, and has been optioned for television and film. When she’s not haunting Paris streets or trudging up English hillsides, she lives in Edinburgh, Scotland and is usually tucked in the corner of a coffee shop, dreaming up monsters.

Taylor Jenkins Reid is the author of The Seven Husbands of Evelyn Hugo, One True Loves, Maybe in Another Life, After I Do, and Forever, Interrupted. Her novels have been Indie Next Picks, chosen by Book of the Month, and featured in People, US Weekly, Entertainment Weekly, Good Morning America, and more. Her newest novel, Daisy Jones and the Six, is a New York Times bestseller. She lives in Los Angeles.

The Near Witch (Paperback)

A Conjuring of Light: A Novel (Shades of Magic #3) (Paperback)

A Gathering of Shadows: A Novel (Shades of Magic #2) (Paperback)

A Darker Shade of Magic: A Novel (Shades of Magic #1) (Paperback)

The Seven Husbands of Evelyn Hugo: A Novel (Paperback)

One True Loves: A Novel (Paperback)

Maybe in Another Life: A Novel (Paperback)

After I Do: A Novel (Paperback)