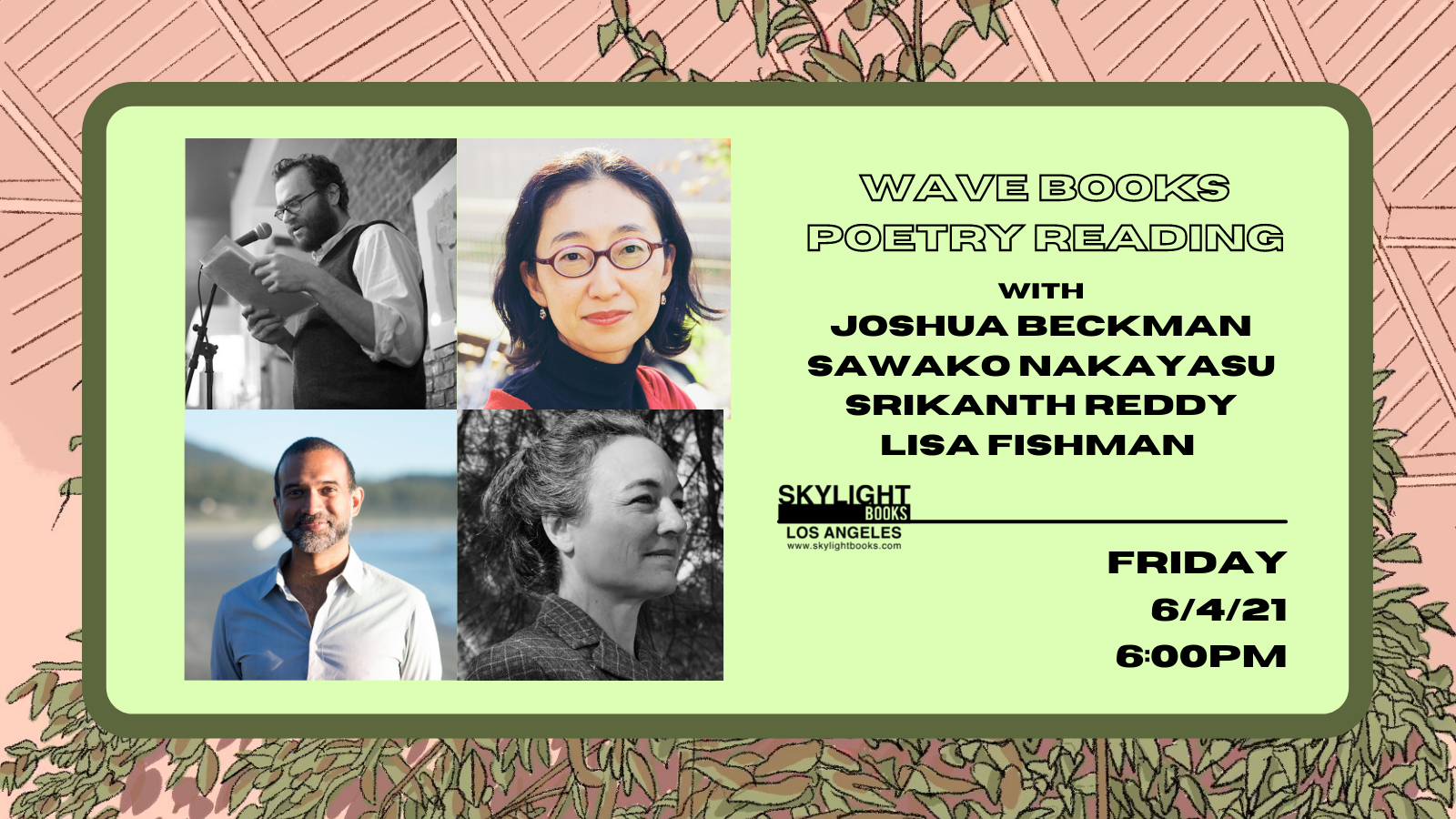 Skylight Books is delighted to present this group reading with poets from Wave Books. Wave Books is an independent poetry press based in Seattle, Washington, dedicated to publishing exceptional contemporary poetry, poetry in translation, and writing by poets. The press was founded in 2005, merging with established publisher Verse Press. By publishing strong, innovative work in finely crafted editions, we hope to continue to challenge the values and practices of readers and add to the collective sense of what’s possible in contemporary poetry.

Joshua Beckman was born in New Haven, Connecticut. He is the author of many books, including Animal Days (Wave, 2021), The Lives of the Poems and Three Talks (Wave Books, 2018), The Inside of an Apple, Take It, Shake, Your Time Has Come, and two collaborations with Matthew Rohrer: Nice Hat. Thanks. and Adventures While Preaching the Gospel of Beauty. He is editor-in-chief at Wave Books and has translated numerous works of poetry and prose, including Micrograms, by Jorge Carrera Andrade, 5 Meters of Poems (Ugly Duckling Presse, 2010) by Carlos Oquendo de Amat, and Poker (Ugly Duckling Presse, 2004) by Tomaž Šalamun, which was a finalist for the PEN America Poetry in Translation Award. He also co-edited Supplication: Selected Poems of John Wieners (Wave Books, 2015).

Sawako Nakayasu is an artist working with language, performance, and translation—separately and in various combinations. She has lived mostly in the US and Japan, briefly in France and China, and translates from Japanese. Her books include Some Girls Walk Into The Country They Are From (Wave, 2020), Pink Waves (forthcoming, Omnidawn), The Ants (Les Figues Press), and the translation of The Collected Poems of Chika Sagawa (Canarium Books), as well as Mouth: Eats Color—Sagawa Chika Translations, Anti-translations, & Originals (reprint forthcoming, Wave Books), a multilingual work of both original and translated poetry. She is co-editor, with Eric Selland, of an anthology of 20th Century Japanese Poetry (forthcoming, New Directions). She teaches at Brown University.

Srikanth Reddy is the author of Underworld Lit (Wave Books, 2020), Voyager—named one of the best books of poetry in 2011 by The New Yorker, The Believer, and NPR—and Facts for Visitors, which won the 2005 Asian American Literary Award. He has written on poetry for The New York Times and The New Republic, and his book of literary criticism, Changing Subjects: Digressions in Modern American Poetry, was published by Oxford University Press in 2012. The NEA, the Creative Capital Foundation, and the Guggenheim Foundation have awarded him grants and fellowships, and in Fall 2015, he delivered the Bagley Wright Lectures in Poetry. A graduate of the Iowa Writers' Workshop and the doctoral program in English at Harvard University, he is currently an Associate Professor of English at the University of Chicago.

Some Girls Walk Into the Country They Are from (Paperback)