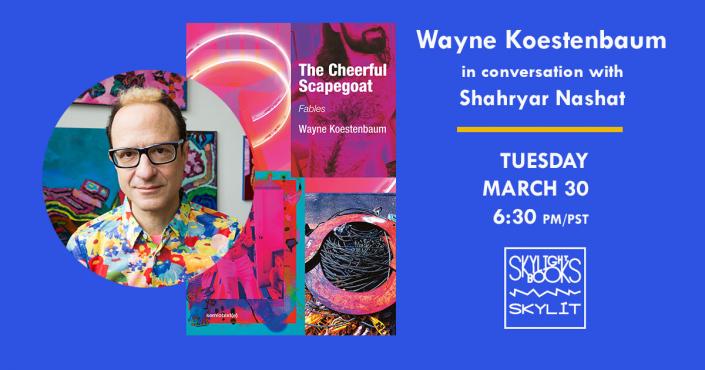 In his first book of short fiction—a collection of whimsical, surreal, baroque, ribald, and heartbreaking fables—Wayne Koestenbaum takes the gloom and melancholy of our own terrifying political moment and finds subversive solace by overturning the customary protocols of tale-telling. Characters and narrators wander into strange locales; the difference between action and thinking, between reality and dream, grows moot in a heightened yet burlesque manner. The activities in The Cheerful Scapegoat are a cross between a comedy of manners and a Sadean orgy. Language has its own desires: figures of speech carry an erotic charge that straddles the line between slapstick and vertigo. Punishment hangs over every dialogue—but in the fable-world of The Cheerful Scapegoat, abjection comes with an undertaste of contentment. The tchotchkes of queer culture—codes and signifiers—get scrambled together and then blown up into an improbable soufflé. Koestenbaum's fables travel in circles, slipping away from their original point and leading the reader to a paradisiacal suspension of fixed categories. Intensified sentences and curlicue narratives scheme together mesmerically to convince the reader to abandon old ways of thinking and to take on a commitment to the polymorphous, the wandering, the tangential. Koestenbaum's fables--emergency bulletins uttered in a perverse vernacular of syntactic pirouettes—alert us to the necessity of pushing language into new contortions of exactitude and ecstatic excess.

Wayne Koestenbaum—poet, critic, novelist, artist, performer—has published 21 books, including The Cheerful Scapegoat, Figure It Out, Camp Marmalade, My 1980s & Other Essays, The Anatomy of Harpo Marx, Humiliation, Hotel Theory, Circus, Andy Warhol, Jackie Under My Skin, and The Queen’s Throat (nominated for a National Book Critics Circle Award). In 2020 he received an American Academy of Arts and Letters Award in Literature. Yale’s Beinecke Rare Book and Manuscript Library acquired his literary archive in 2019. He is a Distinguished Professor of English, French, and Comparative Literature at the City University of New York Graduate Center.

Shahryar Nashat is an artist. He recently had shows at Kunsthalle Basel, the Museum of Modern Art and the Swiss Institute, New York.