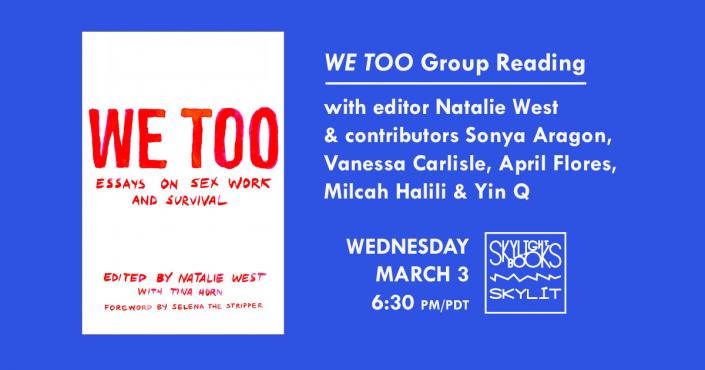 Please note: This event will take place live on Crowdcast. RSVP here to join the livestream or watch the replay.

We Too: Essays on Sex Work and Survival (Feminist Press)

Writing across topics such as homelessness, motherhood, and toxic masculinity, We Too: Essays on Sex Work and Survival gives voice to the fight for agency and accountability across sex industries. With contributions by leading voices in the movement such as Melissa Gira Grant, Ceyenne Doroshow, Audacia Ray, femi babylon, April Flores, and Yin Q, this anthology explores sex work as work, and sex workers as laboring subjects in need of respect—not rescue.

A portion of this book's net proceeds will be donated to SWOP Behind Bars (SBB).

Praise for We Too:

“While mainstream media does not allow the space for a complex and nuanced portrait of sex work, because such coverage is often weaponized, this book is salvation. The writing is unfailingly keen, each piece individually capable of inducing radical empathy. This book and its fierce creators are ready to change the world.” —Booklist, starred review

“We Too: Essays on Sex Work and Survival embodies the rallying cry: ‘Nothing about us without us.’ Featuring incisive essays by sex workers of all backgrounds, this vital anthology centers diverse narratives about sex work, labor rights, sexual assault, trauma, and healing that too often go unheard. Raw, gut-wrenching, and transformative, We Too is a powerful addition to the canon of books by sex workers and for sex workers and their allies.” —Kristen J. Sollée, author of Witches, Sluts, Feminists

“A necessary, wide-ranging, preconception-smashing collection of essays by writers who speak from experience within the sex industry. At turns, these essays are devastating, astute, funny, and heart opening. Taken together, they are a welcome antidote to the reductive narratives about sex worker experiences that we hear too often. We Too is an anthology that honors the humanity, diversity, and depth of insight within the field. Reading it made me want to stand up and cheer.”  —Melissa Febos, author of Whip Smart and Abandon Me

Sonya Aragon is a writer and artist who lives in New York. She works at the intersection of intimacy and capitalism.

Vanessa Carlisle holds a PhD and has worked in the sex industries for over twenty years. She is a founding member of the Hookers Army of Los Angeles and author of Take Me With You. She also teaches workshops and classes on a variety of topics on sexuality and gender.