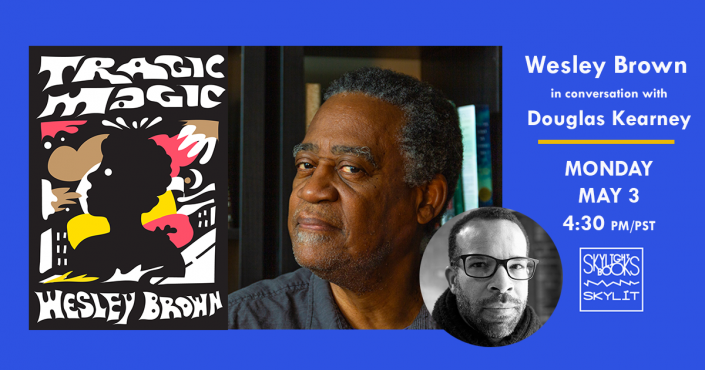 Tragic Magic (McSweeney's Of the Diaspora)

Tragic Magic is the story of Melvin Ellington, a.k.a. Mouth, a Black, twenty-something, ex-college radical who has just been released from a five-year prison stretch after being a conscientious objector to the Vietnam War. Brown structures this first-person tale around Ellington’s first day on the outside. Although hungry for freedom and desperate for female companionship, Ellington is haunted by a past that drives him to make sense of those choices leading up to this day.

Through a filmic series of flashbacks, the novel revisits Ellington’s prison experiences, where he is forced to play the unwilling patsy to the predatory Chilly and the callow pupil of the not-so-predatory Hardknocks; then dips further back to Ellington’s college days, where again he is led astray by the hypnotic militarism of the Black Pantheresque Theo, whose antiwar politics incite the impressionable narrator to oppose his parents and to choose imprisonment over conscription; and finally back to his earliest high school days, where we meet in Otis, the presumed archetype of Ellington’s “tragic magic” relationships with magnetic but dangerous avatars of black masculinity in crisis. But the effect of the novel cannot be conveyed through plot recapitulation alone, for its style is perhaps even more provoking than its subject.

Originally published in 1978, and edited by Toni Morrison during her time at Random House, this Of the Diaspora edition of Tragic Magic features a new introduction by author Wesley Brown.

Wesley Brown is the author of three published novels, a collection of short stories, Dance of the Infidels, and four produced plays, including Dark Meat on a Funny Mind. He is Professor Emeritus in English at Rutgers University and has taught literature, drama and creative writing at Bard College at Simon’s Rock. He wrote the narration for a segment of the 1997 PBS documentary, W.E.B. Du Bois: A Biography in Four Voices and is co-editor of the Methuen Anthology of American Women Playwrights: 1970-2020. A new edition of Brown’s first novel, Tragic Magic will be published by McSweeney’s in 2021. He lives in Lawrenceville, Georgia.

“Tragic Magic is a tremendous affirmation. . One hell of a writer.”—James Baldwin

“Wesley Brown’s Tragic Magic is an underrated classic in the vein of my favorite albums. This is a book worth holding close and hugging hard. There has been much talk about the literary foreparents to hip-hop culture and for my money Brown has to take his place alongside the likes of the Black Arts Movement, The Nuyoricans, Piri Thomas, and Julius Lester. Pick this one up and ride alongside a masterful storyteller.”—Nate Marshall, author of Finna: Poems

“A prescient ancestor to today’s insurgent, boundary-breaching African American fiction…deserves rediscovery by a new generation of readers curious about where an earlier generation of Black protest came from and how they came through its challenges.”—Kirkus

Someone Took They Tongues (Paperback)

Mess and Mess and (Paperback)