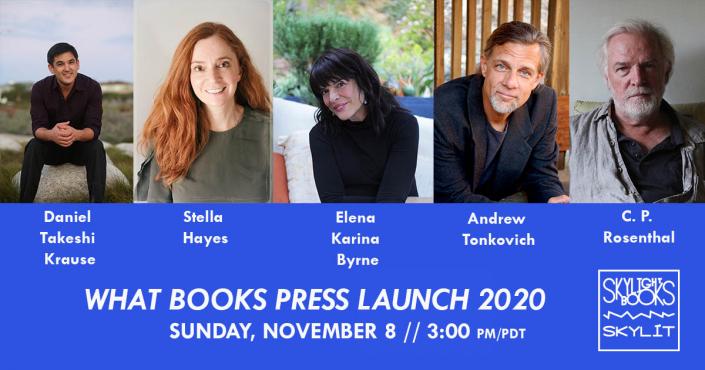 Join us as we celebrate the crop of 2020 books from LA's own What Books Press, featuring readings by Daniel Takeshi Krause, Stella Hayes, Elena Karina Byrne, Andrew Tonkovich, and Chuck Rosenthal! Please note: this event will take place live on Crowdcast. RSVP here to join the livestream or watch the replay!

Quirky, cerebral,  exquisitely tortuous, Daniel Takeshi Krause’s first novel, Remembering Dismembrance, takes the form of a compendium of  critical responses to a novel titled, Dismembrance, and advertises itself as a "second synchronic snapshot of discourse in action...claiming its place as not just the leading anthology for its subject matter but, in point of fact, the definitive piece of Dismemorabilia.  It is, put simply, the only absolutely indispensable thread for anyone looking to enter this particular labyrinth.” But which labyrinth is that?

Daniel Takeshi Krause's work has appeared in two languages, three countries, and four dimensions.  His work has been performed or printed most recently in Hairstreak Butterfly Review, Dream Pop Journal; Halophyte; Versal; at the Banff Center in Alberta, Canada; in A Bad Penny Review; and Sugar House Review.  He completed his PhD in English at the University of Utah.  He currently lives and works in Newport Beach, CA.

In debut poetry collection One Strange Country, Russian-American poet Stella Hayes, replaces one strange country with another she calls home, mapping an origin story of identity, exile and loss. In stark and sharp language, Hayes conveys poems of witness, longing and love. With lyrical urgency, Hayes interrogates displacement and belonging, what it means to grow attached to places as much as to people. This collection takes a reader from a child's understanding of family life in the former U.S.S.R., to an understanding of what it means to come of age, marry, and give birth to children in an adopted country. “An exile’s life is planned one day at a time,” Hayes declares in one poem which informs her own experiences, as a daughter, sister, mother, and poet. “One Strange Country is as much a collection of maps as it is a collection of poems.” (Erica Wright) Hayes has embraced what Frank Bidart would call her “radical givens,” those writerly obsessions that we cannot escape.

One Strange Country is Stella Hayes’s first poetry collection. She grew up in an agricultural town outside of Kiev, Ukraine and Los Angeles. Hayes earned a creative writing degree at University of Southern California. Her work has appeared in Prelude, The Indianapolis Review and Spillway, among others. She lives in Larchmont, N.Y., with her husband, writer Dade Hayes, and children, Margot and Finley.

Elena Karina Byrne’s chapbook, NO, DON’T, offers a restless portrait of identity that reflects the shifting terrains of desire and gender, of personal loss and punishing empowerment, and of political and cultural abuse. Under the influence of language's “steeplechase hours,” this book’s “carnal ambition” becomes a Run Lola Run crash between fate and will as reality marries wild imagination. Each inventive poem turns perception into action and feeling into an art of attention as the poet travels between the past and the present, between conscious and unconscious thinking in order to tell a powerful story.

Elena Karina Byrne is a pushcart prize recipient and author of five books including If This Makes You Nervous, (Omnidawn Publishing, 2021) She recently completed a collection of published essays, Voyeur Hour: Meditations on Poetry, Art & Desire and is working on a hybrid-adaptation of Kobe Abe’s The Box Man. Former 12-year Regional Director of the Poetry Society of America and Kate & Kingsley Tufts Awards judge, Elena is a freelance lecturer, editor, Poetry Consultant & Moderator for The Los Angeles Times Festival of Books, and Literary Programs Director for the historic Ruskin Art Club. Her publications include Best American Poetry, Poetry, The Paris Review, The Academy of American Poets Poem-A-Day, BOMB, Volt, Verse Daily, Poetry International, The Kyoto Journal, New American Writing, and Persea Books’ The Eloquent Poem among others.

​Keeping Tahoe Blue and Other Provocations

One young father reconciles his parental responsibilities with hatemongers living down the block, another struggles with his own parents’ deaths.  Fabulist political tales offer resistance, whether in acts of civil or psychic disobedience.  Finally, in a novella set on the famously clear California alpine lake, a composite character --- ordinary, compromised failure or unlikely hero – responds to the demand that he act on behalf of his own redemption in a gesture of ecological courage or only fantasy.

From a re-imagined Southern California childhood to adult confrontations with power both real and allegorical, these personally and politically engaged stories place their protagonists in everyday circumstances gone surreally rich in possibility, humor and potential resistance.  The provocations of everyday political and familial life arrive as fact-fables about fathers and sons, citizenship, faith, addiction, and a nearly mythic insistence on imagination, with opportunities to embrace insight, reconciliation or painful truth.

Andrew Tonkovich’s essays, fiction, journalism and reviews have appeared in the Los Angeles Times, OC Weekly, LA Review of Books, Ecotone and Best American Nonrequired Reading.  He is the author of a novella collection, The Dairy of Anne Frank, and co-editor of the first-ever literary anthology of Orange County, California. He edits the West Coast literary magazine Santa Monica Review and hosts Bibliocracy, a books show and podcast on KPFK in Southern California.

The Hammer, The Sickle, And The Heart: Trotsky And Kahlo In Mexico

Leon Trotsky and his wife, Natalia Sedova, are exiled to Mexico where they are harbored and protected by Frida Kahlo and Diego Rivera at Casa Azul outside Mexico City in Coyoacán.  Amidst threats on Trotsky’s life by the henchmen of Stalin, and the murders of his sons in Europe, Trotsky begins a love affair with Frida Kahlo.  When Sedova discovers the affair, she leaves Trotsky and begins an affair with a Soviet double agent.  Trotsky and Sedova reconcile before Trotsky’s assassination.

C. P. Rosenthal is a novelist who has published 17 previous books, some under the name Chuck Rosenthal.  His work has been translated into Spanish, Italian, German, Swedish, and Korean, and has been nominated for the PEN West Literary Award, the National Book Award, the National Book Critics Circle Award, and Best American Fiction.  He has traveled and researched extensively in Mexico City and throughout Mexico.

The Origin of Stars and Other Stories (Ebook) (Paperback)

The Hammer, The Sickle and The Heart (Paperback)