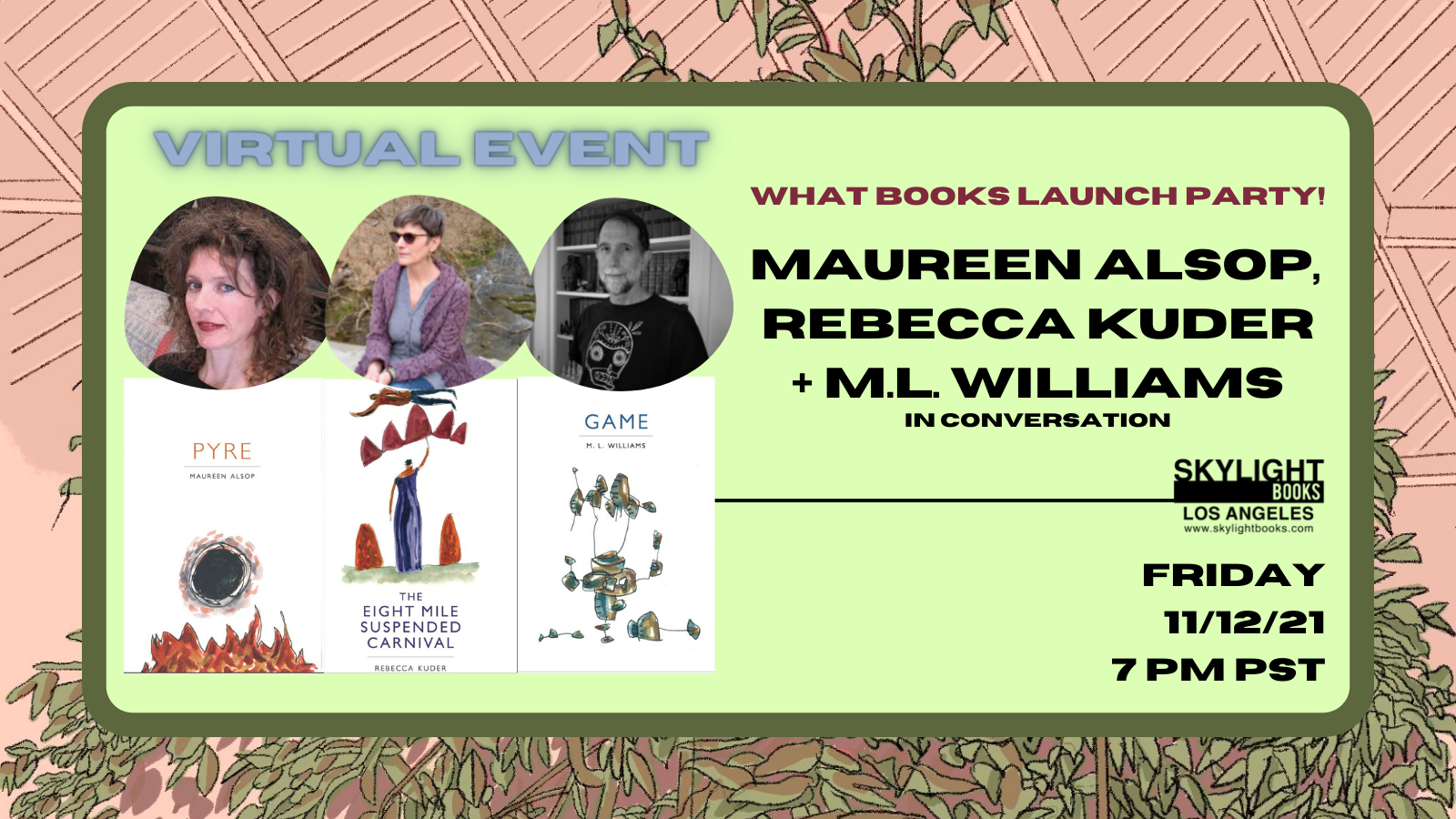 Join us for the virtual launch of three What Books Press titles! RSVP here to join live or watch the replay.

A tornado drops a young woman near the Eight Mile Suspended Carnival, with no memories and no name. The carnies adopt her and call her Mim. The carnival is a living beast: its spine the Tower of Misfortune; its arms the tents; its legs the rides; its blood the wine, food, and excrement flowing through carnies and guests. As Mim adapts to carnival life, she discovers she can see other peoples’ memories. She becomes entangled with the carnival boss and his intricate vendetta, and propels vengeance into motion. The Eight Mile Suspended Carnival is a swirling literary-fabulist tale of sexual awakening and noir revenge, where the machines that make dreams are assembled

Rebecca Kuder’s work has appeared in Los Angeles Review of Books; Hags on Fire; Bayou Magazine; Shadows and Tall Trees; Lunch Ticket; Year’s Best Weird Fiction vols. 3 & 5; The Rumpus; and Crooked Houses. She received an MFA from Antioch University Los Angeles, and an individual artist excellence award from the Ohio Arts Council. Rebecca lives in Yellow Springs, Ohio, with the writer Robert Freeman Wexler and their child. This is her first novel. Learn more at www.rebeccakuder.com.

Game approaches the catastrophe of language in call-and-response interplay between poems and Wittgenstein’s Philosophical Investigations, set in diverse spaces—rooms, dining tables, thresholds, picture frames, deserts, swamps and creeks, urban streets, seashores, a spider’s web, cafes, playground, porches in the rain—all places where the multiform gods dwell, love, play, ignore, and destroy. Underpinning the emotional territory of the book Is the shared experience—mine and Ludwig’s—of losing brothers to suicide; hence every poem, every philosophical phrase, is an act of survivor’s guilt.

M. L. Williams is author of the chapbook Other Medicines and co-editor of How Much Earth: The Fresno Poets, and he served as editor or co-editor of Quarterly West for five years. His work is in many journals and anthologies, including Plume, Hubbub, Salt, Western Humanities Review, Miramar, The Journal of Florida Studies, The Cortland Review, Live Encounters Poetry, and Stone, River, Sky, and has been nominated for several Pushcart Prizes. He co-emcees the Poetry Stage at the Los Angeles Times Festival of Books, and he teaches creative writing and contemporary literature at Valdosta State University.

These “feral elegies,” spacious, experimental and abstract, spark and inflame language. They splinter, oxygenate. Alsop’s kindling: voices, mineral in absence. The poems delve into collaborations invented in life and life beyond. Through metaphor, the collection evocatively sculpts a new metaphysics—thumbed in ash, cinder’s smudge, as embers glow from grief’s breath. Here, a prophetic moon emerges in cyclical écriture féminine, this series of meditations combust, twine unspoken cords, and pause only in arcs of imagination as remedy.

Maureen Alsop, PhD lives on an island in the Coral Sea. She is the author of Pyre;  Mantic; Apparition Wren; Mirror Inside Coffin; and Later, Knives & Trees. She is the winner of the Tony Quagliano International Poetry Award through the Hawaii Council for the Humanities, Harpur Palate's Milton Kessler Memorial Prize for Poetry and The Bitter Oleander’s Frances Locke Memorial Poetry Award. She holds an MFA from Vermont College.