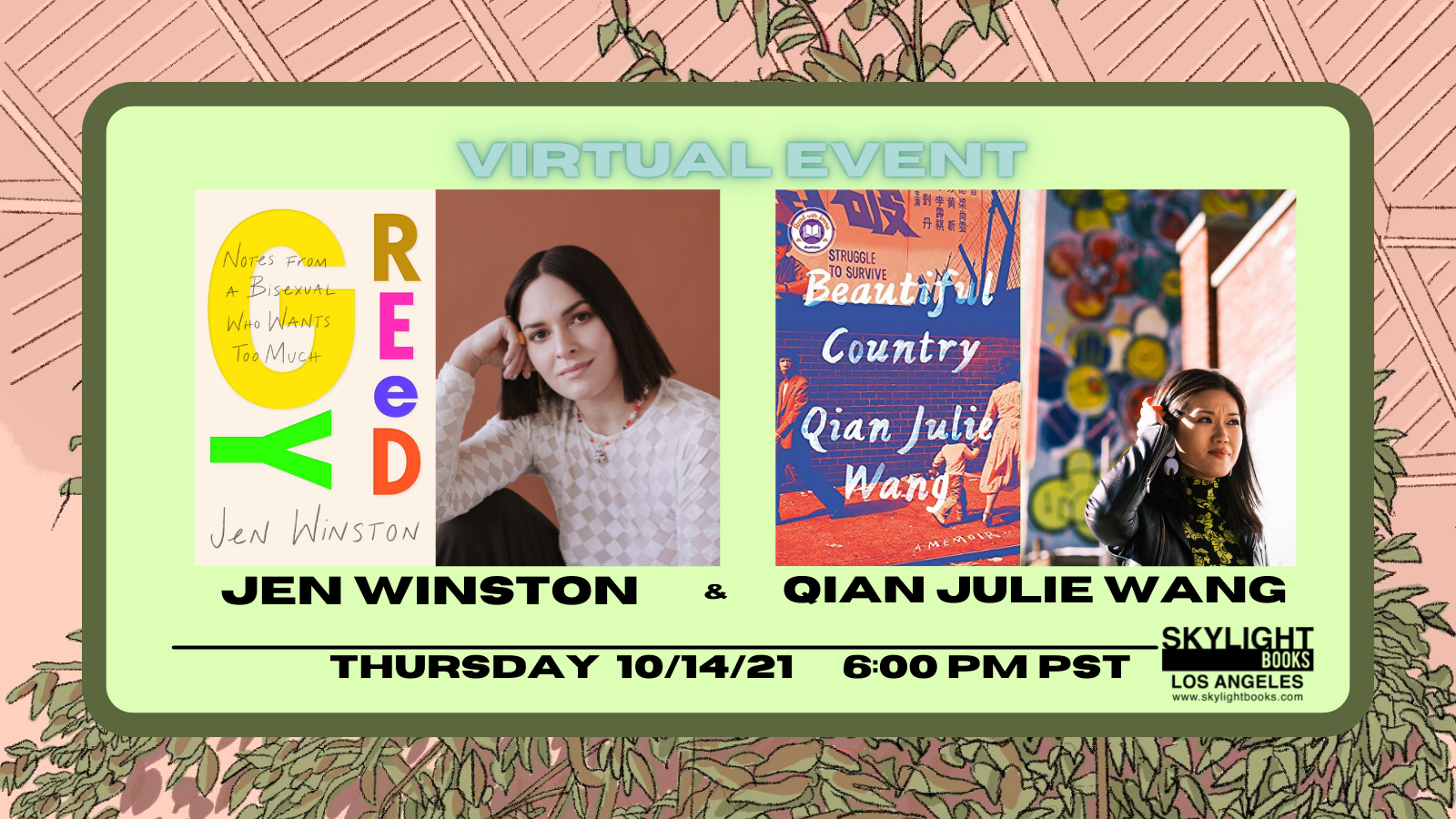 Writing Personal History with authors Jen Winston (Greedy: Notes From A Bisexual Who Wants Too Much) and Qian Julie Wang (Beautiful Country)

A hilarious and whip-smart collection of essays, offering an intimate look at bisexuality, gender, and, of course, sex. Perfect for fans of Lindy West, Samantha Irby, and Rebecca Solnit—and anyone who wants, and deserves, to be seen.

If Jen Winston knows one thing for sure, it’s that she’s bisexual. Or wait—maybe she isn’t? Actually, she definitely is. Unless…she’s not?

With her clever voice and clear-eyed insight, Jen draws on personal experiences with sexism and biphobia to understand how we all can and must do better. She sheds light on the reasons women, queer people, and other marginalized groups tend to make ourselves smaller, provoking the question: What would happen if we suddenly stopped?​​

Greedy shows us that being bisexual is about so much more than who you’re sleeping with—it’s about finding stability in a state of flux and defining yourself on your own terms. This book inspires us to rethink the world as we know it, reminding us that Greedy was a superpower all along.

Jen Winston (she/they) is a writer, creative director, and bisexual. Jen runs a monthly newsletter called The Bi Monthly, and their first essay collection—Greedy: Notes from A Bisexual Who Wants Too Much—is available now from Atria Books. Jen’s work bridges the intersection of sex, politics, and technology, and has been featured by the Wall Street Journal, Washington Post, CNN, and more. Jen is passionate about unlearning and creating work that helps others do the same. She lives in Brooklyn with her partner, dogs, and iPhone. Follow Jen on Twitter and Instagram: @Jenerous.

An incandescent memoir from an astonishing new talent, Beautiful Country puts readers in the shoes of an undocumented child living in poverty in the richest country in the world.

In Chinese, the word for America, Mei Guo, translates directly to “beautiful country.” Yet when seven-year-old Qian arrives in New York City in 1994 full of curiosity, she is overwhelmed by crushing fear and scarcity. In China, Qian’s parents were professors; in America, her family is “illegal” and it will require all the determination and small joys they can muster to survive. In Chinatown, Qian’s parents labor in sweatshops. Instead of laughing at her jokes, they fight constantly, taking out the stress of their new life on one another. Shunned by her classmates and teachers for her limited English, Qian takes refuge in the library and masters the language through books, coming to think of The Berenstain Bears as her first American friends. And where there is delight to be found, Qian relishes it: her first bite of gloriously greasy pizza, weekly “shopping days,” when Qian finds small treasures in the trash lining Brooklyn’s streets, and a magical Christmas visit to Rockefeller Center—confirmation that the New York City she saw in movies does exist after all. But then Qian’s headstrong Ma Ma collapses, revealing an illness that she has kept secret for months for fear of the cost and scrutiny of a doctor’s visit. As Ba Ba retreats further inward, Qian has little to hold onto beyond his constant refrain: Whatever happens, say that you were born here, that you’ve always lived here. Inhabiting her childhood perspective with exquisite lyric clarity and unforgettable charm and strength, Qian Julie Wang has penned an essential American story about a family fracturing under the weight of invisibility, and a girl coming of age in the shadows, who never stops seeking the light.

Qian Julie Wang (she/her) is a graduate of Yale Law School and Swarthmore College. Formerly a commercial litigator, she is now managing partner of Gottlieb & Wang LLP, a firm dedicated to advocating for education and civil rights. Her writing has appeared in major publications such as the New York Times and the Washington Post. She lives in Brooklyn with her husband and their two rescue dogs, Salty and Peppers.

Greedy: Notes from a Bisexual Who Wants Too Much (Paperback)