LIVE AT DYNASTY TYPEWRITER: CASEY WILSON discusses her new book THE WRECKAGE OF MY PRESENCE with KRISTEN WIIG 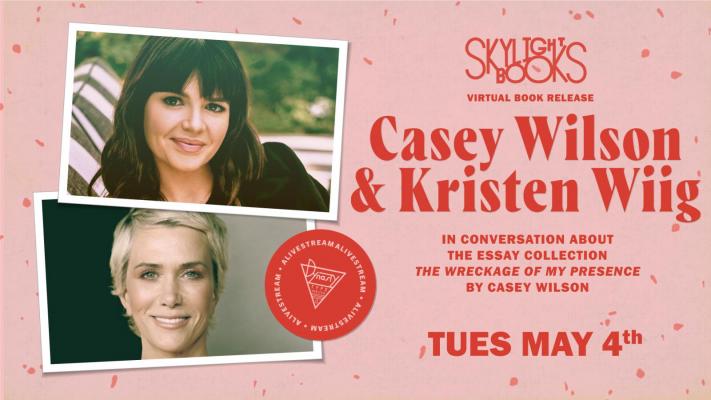 *Please note: this event will be hosted by Dynasty Typewriter. Get your tickets here.

*Signed bookplates are available! If you buy the book via Dynasty Typewriter, you'll automatically receive a signed bookplate with your copy.

The Wreckage of My Presence (Harper)

Casey Wilson’s long-anticipated first book, THE WRECKAGE OF MY PRESENCE, is a collection of personal essays that are at once thoughtfully constructed and radically, messily forthright and full of feeling. In it, she explores the joys and vagaries of modern-day womanhood and motherhood, introduces readers to the not-quite-typical family that made her who she is, and uses what others might see as lowbrow pop culture as a lens for a richer understanding of human nature.

Whether she’s extolling the virtues of eating in bed, recounting the best Wilson family road trip, or trying to figure out her pathological need to be liked, Wilson’s writing is witty, candid, and full of unexpected moments. Deeper dives into some of her obsessions—Scientology and self-help, nice guys, eating in bed, and reality TV shows—alternate seamlessly with touching meditations on grief, motherhood, and identity, all delivered in Casey’s distinctive voice.

It’s a laugh-out-loud pleasure to spend time in her presence, and feel like you’re hanging out with your best friend: a deeply passionate, full-tilt, joyous, excessive, obsessive, shameless, hungry-for-it-all, loyal, cheerleading friend. A friend who is ready for any big feeling that comes her way.

Casey Wilson is an actress, writer, director, and podcaster. She stars in Showtime’s Black Monday, and her credits include the HBO series Mrs. Fletcher, and the sitcoms Marry Me, based on her life, and the cult hit Happy Endings. She was also a featured player on Saturday Night Live for two seasons. Casey has also been featured in: Gone Girl, Julie & Julia, For Your Consideration, Curb Your Enthusiasm, Atypical, One Mississippi, The Disaster Artist, Black-ish, Always Be My Maybe, and The Shrink Next Door. She co-hosts the hit podcast Bitch Sesh, which was a 2019 People’s Choice Award nominee. Casey co-wrote and co-starred in the movies Bride Wars and Ass Backwards with her longtime collaborator and best friend June Diane Raphael. Her directorial debut, Daddio, premiered at SWSW and TIFF. Casey lives with her husband and two sons in Los Angeles.

She also still sucks her thumb.

Kristen Wiig recently starred in Barb & Star Go to Vista Del Mar which she co-wrote and produced alongside Annie Mumolo. Wiig and Mumolo are currently in development on an Untitled Evil Stepsisters Project for Disney which they are co-writing. This past year she also starred in Wonder Woman 1984. Wiig will begin production this summer on MacGruber 2 - a limited television series for NBC's Peacock, starring and co-written by Will Forte. Wiig will also be lending her voice for the next installment of the Despicable Me franchise. Some of Wiig's recent film credits include; Bridesmaids, The Martian, Ghostbusters, Diary of a Teenage Girl, Skeleton Twins, Downsizing, Mother, and Welcome to Me.

The Wreckage of My Presence: Essays (Hardcover)