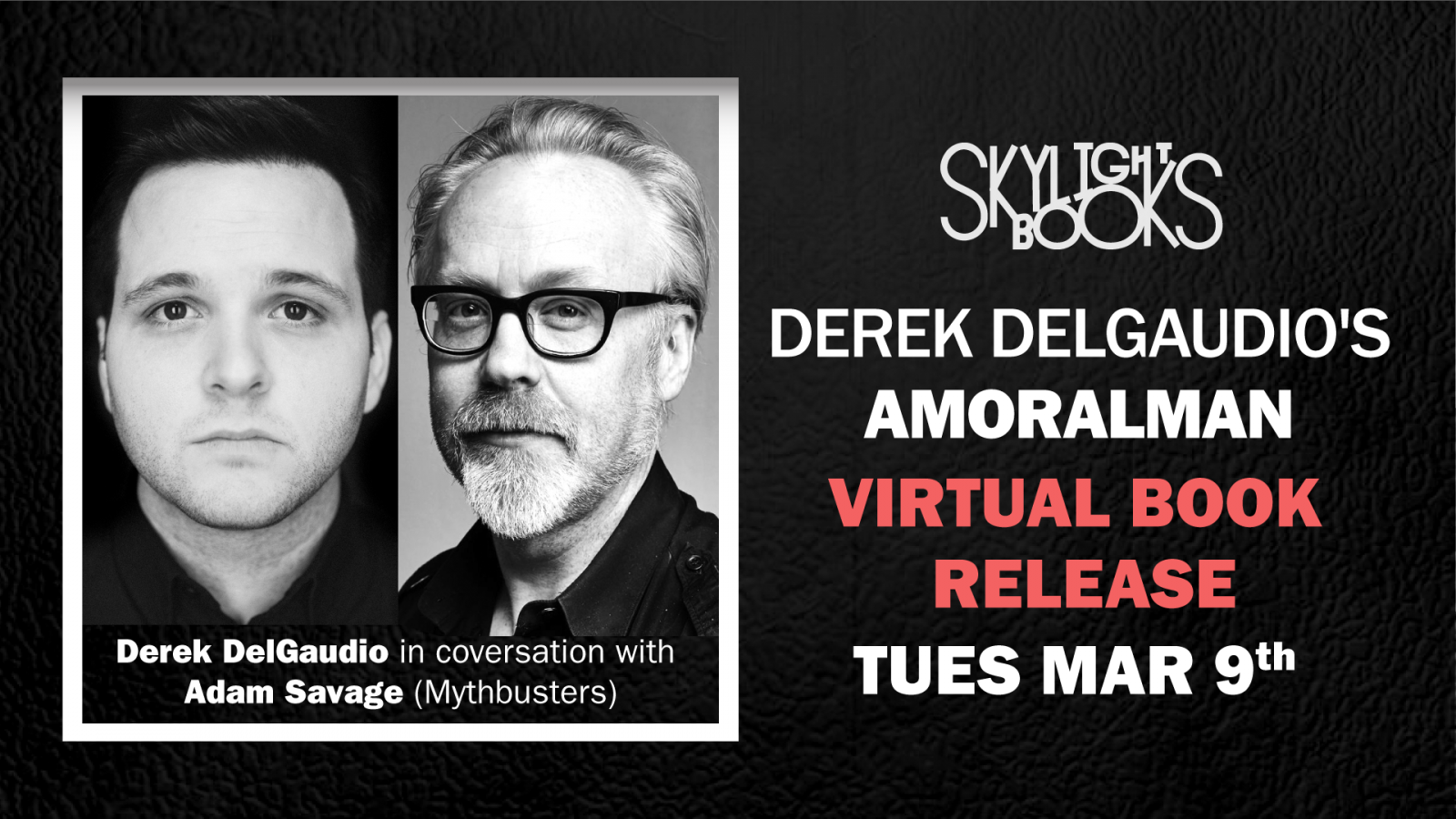 Amoralman: A True Story and Other Lies (Knopf)

Truth and lies are two sides of the same coin. But who’s flipping it?

A thought-provoking and brilliantly entertaining work of nonfiction from one of the world’s leading deceivers, the creator and star of the astonishing theater show and forthcoming film In & Of Itself.

Derek DelGaudio believed he was a decent, honest man. But when irrefutable evidence to the contrary is found in an old journal, his memories are reawakened and Derek is forced to confront–and try to understand–his role in a significant act of deception from his past.

Using his youthful notebook entries as a road map, Derek embarks on a soulful, often funny, sometimes dark journey, retracing the path that led him to a world populated by charlatans, card cheats, and con artists. As stories are peeled away and artifices are revealed, Derek examines the mystery behind his father’s vanishing act, the secret he inherited from his mother, the obsession he developed with sleight-of-hand that shaped his future, and the affinity he felt for the professional swindlers who taught him how to deceive others. And once he finds himself working as a crooked dealer in a big-money Hollywood card game, Derek begins to question his own sense of morality, and discovers that even a master of deception can find himself trapped inside an illusion.

A M O R A L M A N is a wildly engaging exploration of the fictions we live as truths. It is ultimately a book about the lies we tell ourselves and the realities we manufacture in others.

“Every magician is, or wishes they were, masters of secrecy and deception. But what if you are a magician who doesn’t want to deceive? Derek DelGaudio has given us a story about how and where we find truth, and he takes us through some very dark places to get there. We learn how a nice young man became a professional card cheat in a most dangerous game, we learn about magic, and about the shadows in Plato’s Cave, about illusion and reality, until we finally discover that the book in and of itself is a magic trick – one that holds out the hope that we can all learn to walk out of the deceptive and cavernous darkness and into the light.” —Neil Gaiman

“The old hustler’s adage holds that “the game is sold, never told” — meaning that anything you learn will cost you. AMORALMAN is a riveting ledger of one man’s education, a parable about the lines between grifters and marks, a moral man and an amoral one. Buy this book — it’s cheaper than not buying it.” —Jelani Cobb

“A sublime enlightenment. A disappointment only in that it came to an end.” —Tom Hanks

“A boy enthralled by magic becomes an accomplished swindler . . . In his entertaining debut memoir, performer, artist, and magician DelGaudio recounts his transformation from a child who loved magic tricks to a professional card cheat immersed in a world of high-stakes grifters . . . Throughout, he creates animated portraits of the many nasty characters he encountered and conveys a vivid sense of the greed and deception pervasive among gamblers, shills, and liars . . . A lively tale of immersion in—and escape from—the underworld.” —Kirkus Reviews

“This is an absolutely thrilling and unique book. It’s a memoir with the page-turning excitement of a great mystery, and a delightful glimpse into the world of deception that is also a profound philosophical investigation. It is the luminously written, achingly vulnerable story of a human heart. A masterpiece.” —Oskar Eustis, Artistic Director of the Public Theater

“A stunning work! Derek describes a time when he lived in the dangerous shadows of life; when he struggled, like many of us do, to unshackle himself from the perceptions that others had of him and that he had of himself. Beautifully written, we can feel Derek’s heart beating on every page as he tries to find his own truths.” —Frank Oz

“Delgaudio . . . re-confronts some of the key moments and incidents that shaped him and learns that he was not always the good man he believes himself to be today. Written in an open, self-appraising style, the book takes us through the author’s early, formative years, exploring the ways his early interest in (and later obsession with) the art of illusion defined the man he would become. He also delves deeply into his family: the father who disappeared when the author was a boy, the mother who kept secrets, the father-surrogate magic-store owner who introduced DelGaudio to the flimflam men who would become his role models. Any good memoir includes an element of self-discovery, but this one is all about self-discovery, and the truths unveiled are startling, unsettling, and—strangely, considering their nature—inspiring.”—David Pitt, Booklist

Derek DelGaudio is a writer and performer, primarily known for his highly-acclaimed theater show, IN & OF ITSELF. He served as the Artist in Residence for Walt Disney Imagineering and cofounded the performance-art collective, A.BANDIT. Mr. DelGaudio lives in New York City.

Adam Savage has spent his life gathering skills that allow him to take what's in his brain and make it real. He's built everything from ancient Buddhas and futuristic weapons to fine-art sculptures and dancing vegetables. In 1993, Adam began concentrating his career on the special-effects industry, honing his skills through more than 100 television commercials and a dozen feature films, including Star Wars Episode I: The Phantom Menace and Episode II: Attack of the Clones, Galaxy Quest and the Matrix sequels. In 2002, Adam was chosen along with Jamie Hyneman to host MythBusters, which premiered on Discovery Channel in January 2003. Fourteen years, 1,015 myths, 2,950 experiments, eight Emmy nominations and 83 miles of duct tape later, the series ended in March 2016. Today, Adam stars in and produces content for Tested.com, including behind-the-scenes dives into multiple blockbuster films (including Ghost in the Shell, Alien Covenant and Blade Runner). He also produces and stars in his Brain Candy stage show with Vsauce's Michael Stevens. When he's not on an airplane, Adam lives in the San Francisco Bay area with his wife and their two dogs.

AMORALMAN: A True Story and Other Lies (Hardcover)