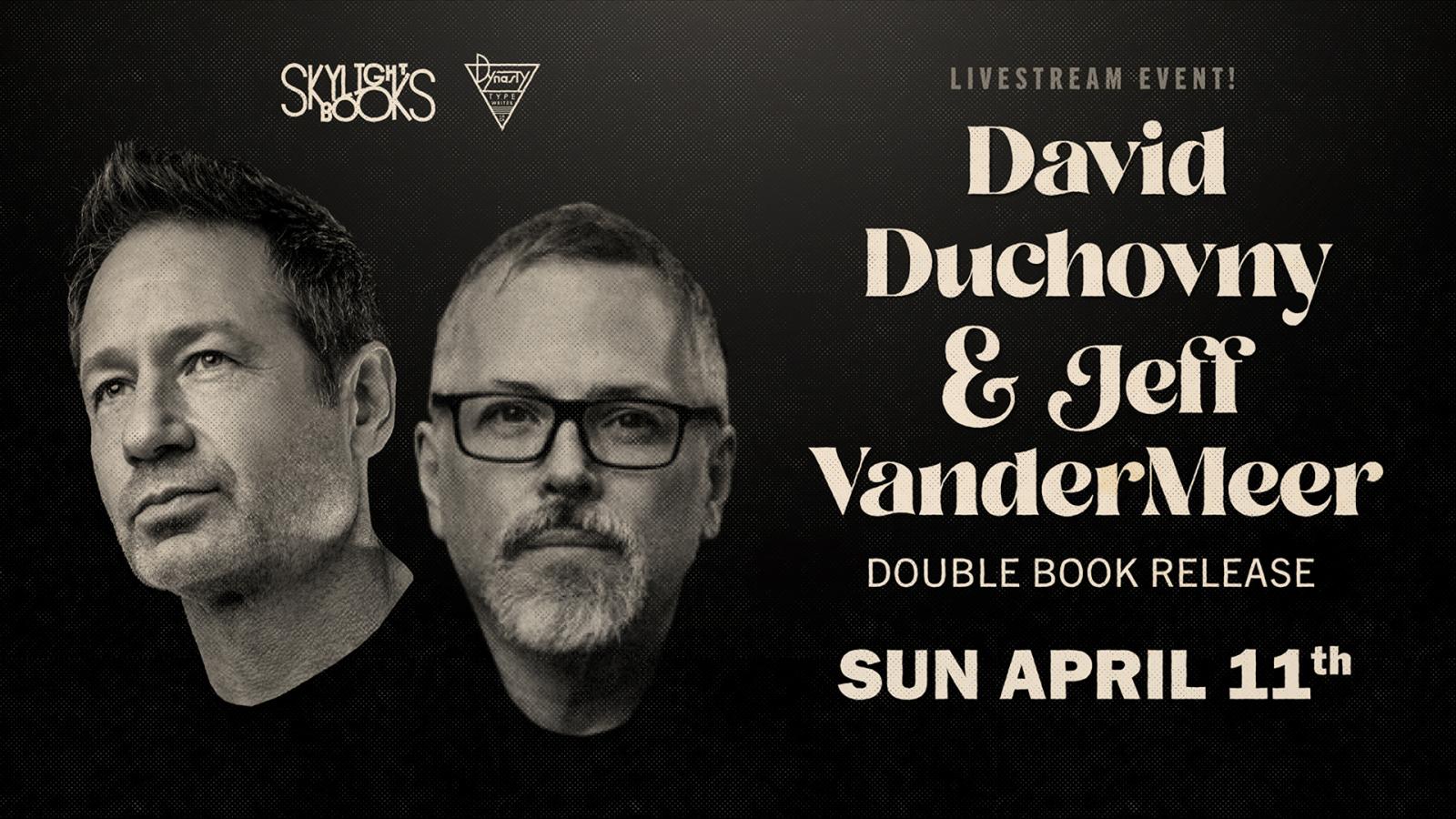 *Please note: this virtual event is hosted by Dynasty Typewriter. Get tickets here.

*If you have questions for David and Jeff, please submit them before Sunday 4/11 using this form.

Join Skylight Books and Dynasty Typewriter for an exciting virtual event–a meeting of the minds and celebration of the newest novels by New York Times-bestselling authors David Duchovny and Jeff VanderMeer, in conversation with David L. Ulin! David and Jeff will discuss their epic novels that explore human nature and our vanishing environment, writing, noir, and much more.

*A limited number of signed bookplates are available for TRULY LIKE LIGHTNING and HUMMINGBIRD SALAMANDER! We will distribute them on a first-come, first-served basis, so buy your tickets now!

From the author of Annihilation, a brilliant speculative thriller of dark conspiracy, endangered species, and the possible end of all things.

Security consultant “Jane Smith” receives an envelope with a key to a storage unit that holds a taxidermied hummingbird and clues leading her to a taxidermied salamander. Silvina, the dead woman who left the note, is a reputed ecoterrorist and the daughter of an Argentine industrialist. By taking the hummingbird from the storage unit, Jane sets in motion a series of events that quickly spin beyond her control.

Soon, Jane and her family are in danger, with few allies to help her make sense of the true scope of the peril. Is the only way to safety to follow in Silvina’s footsteps? Is it too late to stop? As she desperately seeks answers about why Silvina contacted her, time is running out—for her and possibly for the world.

Hummingbird Salamander is Jeff VanderMeer at his brilliant, cinematic best, wrapping profound questions about climate change, identity, and the world we live in into a tightly plotted thriller full of unexpected twists and elaborate conspiracy.

Jeff VanderMeer is the author of Dead Astronauts, Borne, and The Southern Reach Trilogy, the first volume of which, Annihilation, won the Nebula Award and the Shirley Jackson Award and was adapted into a movie by Alex Garland. He speaks and writes frequently about issues relating to climate change as well as urban rewilding. He lives in Tallahassee, Florida, on the edge of a ravine, with his wife, Ann VanderMeer, and their cat, Neo.

From the New York Times–bestselling author David Duchovny, an epic adventure that asks how we make sense of right and wrong in a world of extremes

For the past twenty years, Bronson Powers, former Hollywood stuntman and converted Mormon, has been homesteading deep in the uninhabited desert outside Joshua Tree with his three wives and ten children. Bronson and his wives, Yalulah, Mary, and Jackie, have been raising their family away from the corruption and evil of the modern world. Their insular existence—controversial, difficult, but Edenic—is upended when the ambitious young developer Maya Abbadessa stumbles upon their land. Hoping to make a profit, she crafts a wager with the family that sets in motion a deadly chain of events.

Maya, threatening to report the family to social services, convinces them to enter three of their children into a nearby public school. Bronson and his wives agree that if Maya can prove that the kids do better in town than in their desert oasis, they will sell her a chunk of their priceless plot of land. Suddenly confronted with all the complications of the twenty-first century that they tried to keep out of their lives, the Powerses must reckon with their lifestyle as they try to save it.

Truly Like Lightning, David Duchovny’s fourth novel, is a heartbreaking meditation on family, religion, sex, greed, human nature, and the vanishing environment of an ancient desert.

David L. Ulin is the author or editor of more than a dozen books, including Sidewalking: Coming to Terms with Los Angeles, which was shortlisted for the PEN/Diamonstein-Spielvogel Award for the Art of the Essay, and The Lost Art of Reading: Books and Resistance in a Troubled Time. He has received fellowships from the Guggenheim Foundation, the Lannan Foundation, and Black Mountain Institute at the University of Nevada, Las Vegas. The former book editor and book critic of the Los Angeles Times, he is an associate professor of English at the University of Southern California, where he edits the literary journal Air/Light. Most recently, he has edited Didion: The 190s and 90s, for the Library of America.

A Peculiar Peril (The Misadventures of Jonathan Lambshead #1) (Hardcover)