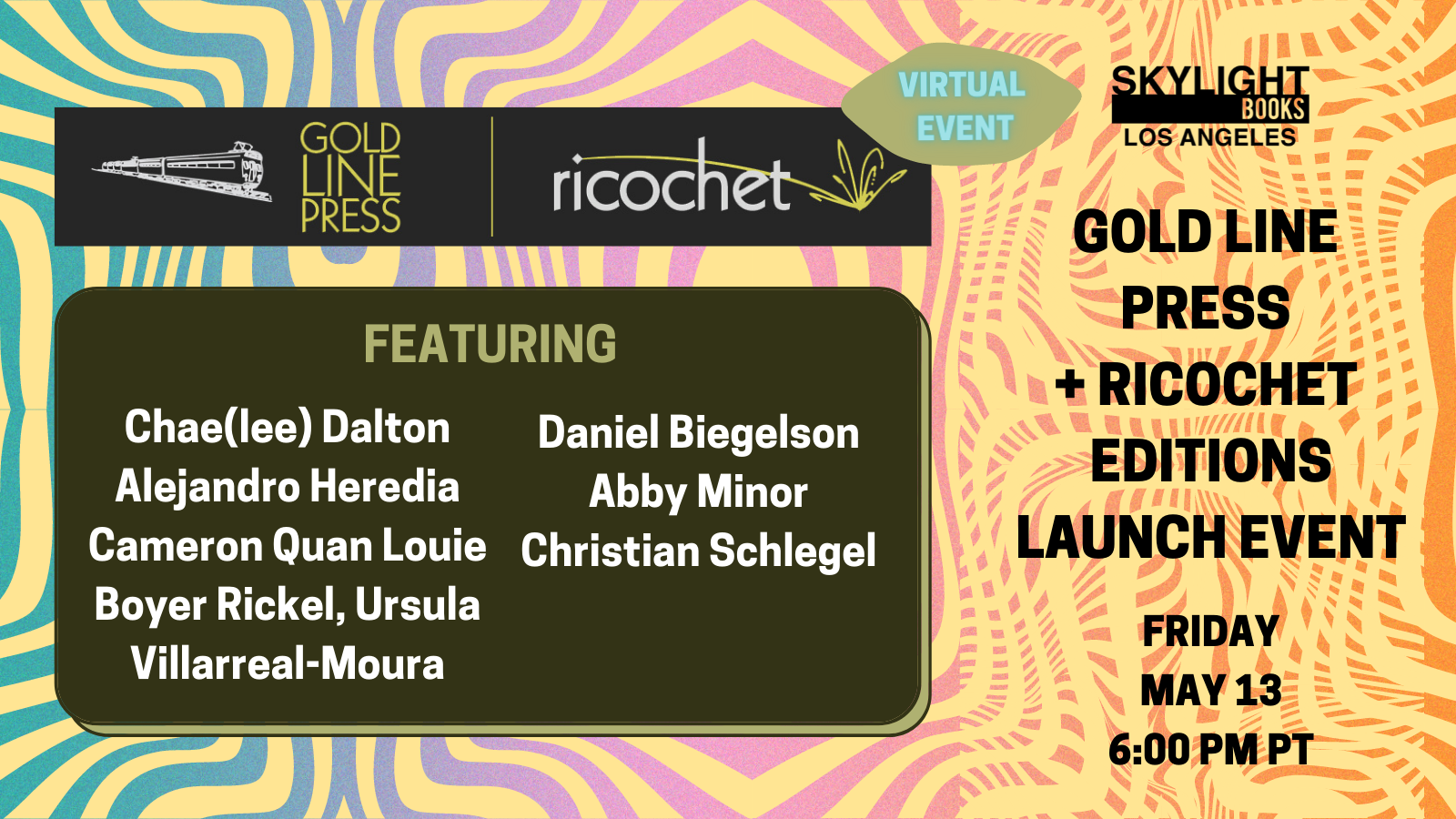 A poetry collection meets cookbook, Mother Tongue celebrates the recipe as a testament to women’s labor and communal care, transmitted and transformed across borders and generations. Dalton uses the recipe form to trace their return to a mother and nation they have never known, and to evoke the simultaneous intimacy and distance they feel embodied in their family histories. While Mother Tongue centers on a personal experience of transnational adoption, in doing so, it illuminates a greater collective sense of hunger and mourning embedded within global frameworks of food, consumption, and connection.

Chae(lee) Dalton is a wintertime poet and summertime ice cream maker. You can find their work in The Offing, Pinwheel, and Penn Review, and at @chaesicecream on Instagram. They are the author of the chapbook Mother Tongue (Gold Line Press 2021) and are currently working on a full-length manuscript focused on the American Korean spa. A queer Korean adoptee, they live in New York, where they teach kids science and hang out with their friends. Find them at chaeleedalton.com.

You’re the Only Friend I Need (Gold Line Press)

The stories in Alejandro Heredia’s You’re the Only Friend I Need offer new possibilities for transnational storytelling and the Dominican diaspora by centering Blackness and queerness. In these stories, friendship is a vehicle to understand what lies between and within people. A young Dominican immigrant makes an unlikely friend in her Bronx building. Two queer teens venture into the streets of Santo Domingo in search of queer belonging. A 20-something lost in existential thought finds a home in a gay Latin club. In Heredia’s stories, friendship is at once balm, poison, wound, and respite from the troubles that society places on migrants, on queer people, on Black folks across the diaspora. You’re the Only Friend I Need cuts through received notions and sings with emotional honesty and lyrical prose.

Alejandro Heredia is a queer Afro Dominican writer and community organizer from The Bronx. He is a 2018 VONA/Voices Fellow and 2019 Dreamyard Rad(ical) Poetry Consortium Fellow. In 2019, he was selected by Myriam Gurba as the winner of the Gold Line Press Fiction Chapbook Contest. His book of short stories, You’re the Only Friend I Need (2021), explores themes of queer transnationalism, friendship, and (un)belonging in the African Diaspora. Alejandro’s work has been featured in Teen Vogue, Lambda Literary Review, Tasteful Rude Magazine, and elsewhere. He is an MFA candidate at Hunter College.

Moving between ever-proliferating expressions of public and private remorse, Cameron Quan Louie’s Apology Engine explores moral responsibility, memory, and identity through the fragile, spiraling machinery of the prose poem. Apologies to pets, family members, nations, dissected squids, and famous songs from the circuitry of a collection that asks us to reconsider gendered symbols and aesthetic approaches, as it examines how personal and cultural apologies are interconnected, how they can become tools of control, how they can lose their power to heal, and why we might need to continue making them anyway.

What apologies need to be made these days? Who needs to make the apologies, and what happens once they do? Apology Engine works its way into the gears of these questions, breaking them apart in the search for an elusive answer.

Cameron Quan Louie lives in Tucson, AZ. A graduate of the University of Washington’s MFA program, he has also been a Multiplying Mediums Fellow, winner of the 2017 McLeod-Grobe Prize for Poetry, and 2019 grant recipient from the Arts Foundation for Tucson and Southern Arizona for his poetry and photography series, Domestic. His poems, essays, and erasures appear or are forthcoming in jubilat, The Rumpus, Entropy, Quarterly West, Best New Poets, Asian American Writers Workshop, Sonora Review, Salt Hill, Wendy’s Subway, The Spectacle, Hobart, The Gravity of the Thing, Pacifica Literary Review, Fourth Genre, and elsewhere.

Morgan (a Lyric) accumulates impressions of the complex emotional landscape of a relationship shadowed by the likely early death of a lover from cystic fibrosis. Rather than a through-line story, the memoir is fashioned from brief narrative episodes, patterned sentence collages, and notes on cognition and perception. Shifting repeatedly in time and location—from a hospital dialysis unit to sex in a parked car to a romantic writers’ Baja retreat to an ICU following lung transplant—a portrait builds of a love lived under the intensifying pressure of mortality.

Boyer Rickel’s previous publications include two book-length poetry collections, remanence (Parlor Press) and arreboles (Wesleyan), a memoir-in-essays, Taboo (Wisconsin), as well as three poetry chapbooks, Tempo Rubato (Green Linden Press), Musick’s Hand-maid and reliquary (both from Seven Kitchens Press). In addition to poetry fellowships from the National Endowment for the Arts and Arizona Commission on the Arts, his lyric essays have recently received awards from Prairie Schooner and Tupelo Quarterly. He taught in the University of Arizona Creative Writing Program for twenty years.

Math for the Self-Crippling is an interlinked flash fiction collection beginning in 1990s San Antonio through to the present day. Told in first, second, and third person, the stories explore Chicana imagination, the tie between religiosity and mysticism, the loss of belongings and family, marital strife, mental health, and dream travel. Equal parts dark and humorous, Math for the Self-Crippling shows how it is to be burglarized and bullied yet still rise up to own the day.

Ursula Villarreal-Moura was born and raised in San Antonio, Texas. Her stories, essays, interviews, and reviews have appeared in various publications including Tin House, Catapult, Prairie Schooner, Story, Midnight Breakfast, Gulf Coast, and Bennington Review. Her writing has been nominated for Best of the Net, the Pushcart Prize, Best Small Fictions, and one of her stories was listed as distinguished in Best American Short Stories 2015.

of being neighbors (Ricochet Editions)

Daniel Biegelson reimagines the lyric “I” as a neighborhood. Hybrids of influences and interlocutors—ranging from Julian of Norwich to Muriel Rukeyser, Sam Cooke, and Adrienne Rich—reveal the permeable borders of self, family, and nation. Biegelson’s poems throw us “back onto the shards / of questions we thought we had answered” and—among the ruins of violent prejudice, economic collapse, and ecological extinction—find in those questions a space of reinvention and potentiality.

In poetry and prose, Biegelson meditates on the complexity of Jewish identity, the responsibility of parenthood, and the experience of community and isolation in a politically polarized environment. With George Oppen’s linguistic precision and Walt Whitman’s ecstatic revelry, of being neighbors dwells where the limits of language give way to possibility, allowing us to imagine the liberatory moment when “maybe, someday, past the evening eclipse / past forgiveness… We’ll see a beach cleared of connotations—bright and ready to be returned.”

Daniel Biegelson is the author of the chapbook Only the Borrowed Light (VERSE). He serves as the Director of the Visiting Writer Series at Northwest Missouri State University, where he also works as an editor for The Laurel Review. He holds an MFA from the University of Montana, an MA from the University of Massachusetts—Amherst, hails from New Jersey and lives near Kansas City with his wife and children. Find him at danielbiegelson.com.

Abby Minor lives in the ridges and valleys of central Pennsylvania, where she works on poems, essays, quilts, and projects exploring reproductive politics.

As I Said: A Dissent (Ricochet Editions)

In As I Said: A Dissent, Abby Minor rejects the vacated terms of the conventional "abortion debate." Instead, these polyvocal poems explore the “exquisite business” of inheritance, embodiment, justice, and citizenship. Anchored by a documentary study of the infamous nineteenth-century abortion provider Madame Restell, Minor’s dissent deftly interweaves historical documents and oral interviews with frank details of contemporary Appalachian life. As I Said eludes the instrumentalization of reproductive storytelling in favor of becoming “aperture / at once seeing / and being ajar.”

Abby Minor lives in the ridges and valleys of central Pennsylvania, where she works on poems, essays, quilts, and projects exploring reproductive politics.

Christian Schlegel is the author, previously, of the poetry collection Honest James (The Song Cave, 2015). He holds an MFA from the Iowa Writers’ Workshop and a doctorate in English from Harvard, and teaches English and creative writing at Pierrepont School in Connecticut. Chris lives with his partner in New Haven.