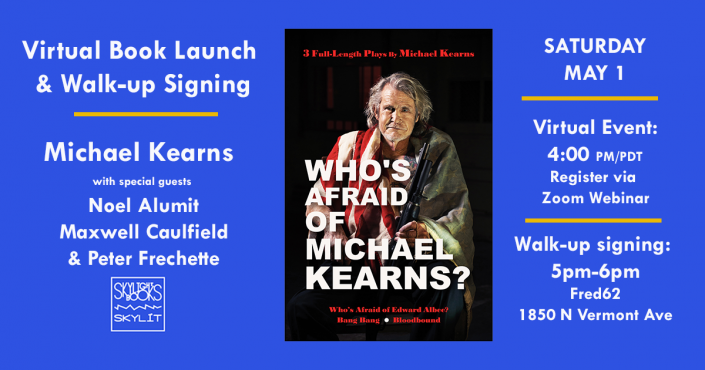 Join Michael Kearns for a special performance, conversation with Noel Alumit, and audience Q&A. A scene from Bloodbound, one of the plays featured in the anthology, will be performed by Maxwell Caulfield and Peter Frechette. The two highly respected actors—(fun fact: they were in Grease II together)—are being directed by Mark Bringelson who directed the world premiere of each play in the Kearns collection.

While theatre artist Michael Kearns engenders a pronounced degree of respect as an accomplished man of the theatre, you would not immediately say he is feared. More than scaring his audiences, he tends to amuse, titillate, and force them to consider the hard truths but never forgetting to take rhapsodic flights of fancy.

Bringelson has written one of the two Forewords of the book. Longtime collaborator—specifically at Skylight Theatre for the last decade—Tony Abatemarco has composed the second one. Kearns is quick to point out that the quality of “courage” so often attributed to him is the byproduct of collaboration. Consider Kearns’ cheeky title—Who’s Afraid of Michael Kearns?—which teases his own authority but doesn’t dismiss it. That title is a wink at the title of the first play in the collection, Who’s Afraid of Edward Albee? Now Kearns is getting serious because, by virtue of this book containing its two bastardized titles,

Kearns is taking a stance, jabbing at the world-renowned, original title, Who’s Afraid of Virginia Woolf? He ain’t afraid of Albee. Kearns is not afraid to entertain the idea that Albee’s quartet of queer characters could be homosexuals or possibly played by homos—an idea that was purportedly Albee’s and then rescinded. This is not new terrain for Kearns to tread: to determinedly question authority. Who’s Afraid of Michael Kearns? is the artist-activist’s seventh theatre book, topping a list that includes two books of monologues (T-Cells & Sympathy, Monologues In The Age of AIDS) two books on solo performance (Getting Your Solo Act Together), an acting book (Acting = Life) and a memoir (The Drama of AIDS). In 2017, he published his “first autobiography,” The Truth Is Bad Enough.

A collection of three plays by the acclaimed Los Angeles playwright known for "…collisions of sex and death, of eroticism and grief"—The LA Weekly. The volume includes Who’s Afraid of Edward Albee? which shrewdly explores the backstage drama of four male actors appearing in Albee's similarly conceived and named masterpiece; “…this sprawling exercise in excess consistently fascinating, as watchable as a train wreck and as feverishly histrionic as a Joan Crawford film festival.” – Los Angeles Times. The anthology also includes Bang Bang, a visceral plunge into the heartache of a school shooting alongside an enigmatic title America’s addiction to the spectacle of carnage, power, and sex. Finally, in Bloodbound, the physical love between two brothers--one who is the play's meta-speaking author, and the other who is a prisoner a serving life indictment of the injustices of mass incarceration, within a love story, the play also reflects the inevitability of revising our own narratives, steeped in familial deception.

“Kearns has developed a uniquely descriptive, empathetic story…Bloodbound is a profound, committed journey. The writing is intense and intimate, distinctly characterized by precise use of language.”—Gia on the Move. Of Michael Kearns’ overall contributions—“Kearns is quite rightfully considered one of the city’s great playwrights...No one writes plays like him.” –-Stage Raw

Noel Alumit is an actor, Los Angeles Times bestselling author, and Buddhist pastor. He wrote the novels Letters to Montgomery Clift and Talking to the Moon.  He was the recipeint of an Emerging Voices fellowship from PEN America and a Stonewall Book Award from the American Library Association. His work has been nominated for the PEN, the Lambda Literary award and the Southern California Book Award. Recently, he was awarded a 2020-21 City of Los Angeles (COLA) Individual Artists Fellowship. He recieved his BFA in Acting from USC and MDiv in Buddhist Chaplaincy from the University of the West.

Maxwell Caulfield has had a long and varied career since emigrating to the US from his native England in 1978. An Off B’way debut in Class Enemy won him a Theater World Award and led to his being cast in the touring production of The Elephant Man as the titular character. Another eponymous role that of the Entertaining Mr. Sloane brought him to the attention of Hollywood and a successful screen test for the male lead in Grease 2. Movies of note made since then include The Boys Next Door, Empire Records and The Real Blonde. He is also known for the his role as ‘Miles’ in ABC’s The Colbys. But it is the theatre that has brought him the widest range of roles from ‘Billy Flynn’ in Chicago (West End/B’way) to ‘Henry Higgins’ in My Fair Lady. He has played all of the major stages of Los Angeles and toured the UK on four separate occasions two of them with his wife Juliet Mills most recently in an adaptation of The Lady Vanishes.  His last pre-pandemic appearance was as real life executioner Albert Pierrepont in Hangmen by Martin McDonagh at The Atlantic in NYC.

Mark Bringelson is an award-winning director/writer and directed the world premiere productions of three plays by Michael Kearns: Bloodbound, Bang Bang, and Who’s Afraid of Edward Albee? Other world premiere plays directed include three by Tom Jacobson (Bunberry, Cyberqueer, and Friendly Hour), four by Susan Rubin (Bitch, Above The Line, Eve-2, and Liana and Ben) and Mike Kindle’s play about Barack Obama’s mother, Stanley Ann. He directed two in-house Pilot Projects for HBO: Tug & Buster and The Caveman. He wrote/directed the films, Phillip Is Game and Obedience, and will direct the films, Janet and The Place, both which he also wrote, later in 2021.

Who's Afraid of Michael Kearns?