LIVE ON ZOOM: YURI HERRERA in conversation with JOHN GIBLER 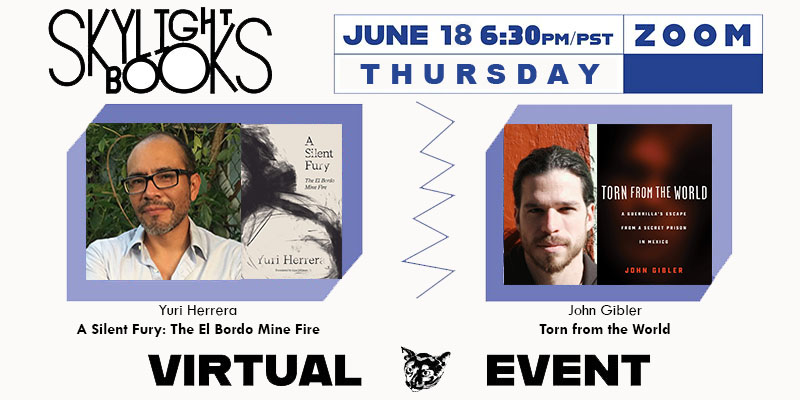 Thursday, June 18th at 6:30pm PST on Zoom: Yuri Herrera will discuss his new nonfiction book A SILENT FURY with John Gibler, author of TORN FROM THE WORLD.

To get the Meeting ID and password, please register on Eventbrite. The event is free to attend. After you register, you will receive an email with login instructions.

We hope to see you there!

Please note: this event will be recorded and released as an episode of the Skylight Books Podcast. Listen & subscribe on Spotify, iTunes or Podbean.

A Silent Fury (And Other Stories)

On March 10, 1920, in Pachuca, Mexico, the Compañía de Santa Gertrudis — the largest employer in the region, and a subsidiary of the United States Smelting, Refining and Mining Company — may have committed murder.

The alert was first raised at six in the morning: a fire was tearing through the El Bordo mine. After a brief evacuation, the mouths of the shafts were sealed. Company representatives hastened to assert that “no more than ten” men remained inside the mineshafts, and that all ten were most certainly dead. Yet when the mine was opened six days later, the death toll was not ten, but eighty-seven. And there were seven survivors.

A century later, acclaimed novelist Yuri Herrera has reconstructed a workers’ tragedy at once globally resonant and deeply personal: Pachuca is his hometown. His work is an act of restitution for the victims and their families, bringing his full force of evocation to bear on the injustices that suffocated this horrific event into silence.

Praise for A Silent Fury:

"A precise and devastating account that peers into the dark mouths of the El Bordo mine as if they were the gates of hell. In these pages, Yuri Herrera paints a portrait of poverty and neglect and reveals, once again, the way exploitation and abuse lurk at the source of all violence." --Alia Trabucco Zerán, author of The Remainder

"A Silent Fury is a narrative rebellion against the archive of atrocity. Herrera subverts the archive, turns it against itself, upends its silencing mission and reveals within it the traces of corporate and governmental abuse, disregard and murder." --John Gibler, author of I Couldn’t Even Imagine That They Would Kill Us

"Like Life of a Klansman, Herrera’s book is a microhistory inspired by an absence in the archives. But where Ball enriches the record with context and speculation, Herrera conducts a crisp, matter-of-fact investigation. In quietly seething prose—ably translated by Lisa Dillman—he parses the evasive accounts of contemporary journalists, judges, mine administrators, and civil authorities, noting the implications of each elision and discrepancy. By the end, the “accident” looks more like homicide, a crime quickly covered up by local officials and company bureaucrats who barely saw their workers as human . . . The book is a gripping demonstration of how much can be unearthed from the omissions of official accounts." --Julian Lucas, Harpers Magazine

"Herrera knows how to plot an intense plot and handle an original style, as capable of revealing a miserable and anguished social reality as well as elevating with poetry the humble and everyday life in order to reach symbolic proportions." --Arturo García Ramos, ABC

"What Yuri Herrera does is Literature, beyond genres or labels. He amply proves it again now, after five years of silence, with a fascinating story that reads like a novel." --Matías Néspolo, El Mundo

"With his characteristic sharp prose and exciting rhythm, Herrera is one of the most remarkable writers of Latin America. The El Bordo Mine Fire is an impeccable exercise of journalism." --Jaime G. Mora
ABC Cultural

"With his trio of books set in the narco-war borderlands, Herrera has shown that he’s a master of the short, tense fiction, and with A Silent Fury, he proves it further, this time venturing into a more historical mode."  --Remezcla

A Silent Fury: The El Bordo Mine Fire (Paperback)

The Transmigration of Bodies (Paperback)

Signs Preceding the End of the World (Paperback)

Torn from the World: A Guerrilla's Escape from a Secret Prison in Mexico (City Lights Open Media) (Paperback)

I Couldn't Even Imagine That They Would Kill Us: An Oral History of the Attacks Against the Students of Ayotzinapa (City Lights Open Media) (Paperback)

To Die in Mexico: Dispatches from Inside the Drug War (City Lights Open Media) (Paperback)