MASSOUD HAYOUN discusses his memoir WHEN WE WERE ARABS 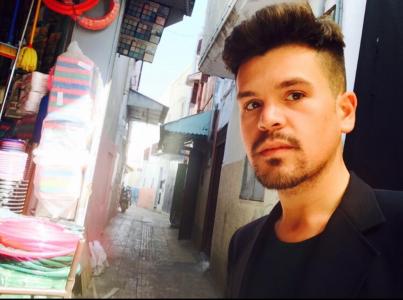 When We Were Arabs: A Jewish Family's Forgotten History (The New Press)

The stunning debut of a brilliant nonfiction writer whose vivid account of his grandparents’ lives in Egypt, Tunisia, Palestine, and Los Angeles reclaims his family’s Jewish Arab identity

There was a time when being an “Arab” didn’t mean you were necessarily Muslim. It was a time when Oscar Hayoun, a Jewish Arab, strode along the Nile in a fashionable suit, long before he and his father arrived at the port of Haifa to join the Zionist state only to find themselves hosed down with DDT and then left unemployed on the margins of society. In that time, Arabness was a mark of cosmopolitanism, of intellectualism. Today, in the age of the Likud and ISIS, Oscar’s son, the Jewish Arab journalist Massoud Hayoun whom Oscar raised in Los Angeles, finds his voice by telling his family’s story.

To reclaim a worldly, nuanced Arab identity is, for Hayoun, part of the larger project to recall a time before ethnic identity was mangled for political ends. It is also a journey deep into a lost age of sophisticated innocence in the Arab world; an age that is now nearly lost.

When We Were Arabs showcases the gorgeous prose of the Eppy Award–winning writer Massoud Hayoun, bringing the worlds of his grandparents alive, vividly shattering our contemporary understanding of what makes an Arab, what makes a Jew, and how we draw the lines over which we do battle.

Praise for When We Were Arabs

“A masterpiece that reads with the same themes of complexity and romance, pain and longing, that are indigenous to the land of his grandparents, and the entwined Arab and Jewish identity that flourishes on every page of this book.”—Khaled Beydoun, law professor and author of American Islamophobia

“A beautifully written, compelling argument for compassion, solidarity, and love, in a time where they are so woefully scarce.”—Sister Helen Prejean, author of Dead Man Walking

“A rare, multifaceted book that dares tell the story of the Arab Jew as it was without propaganda or prejudice and which chronicles how the nuance that had been there in Jewish Arab political identities disappeared under the onslaught of Zionism.”—Raja Shehadeh, author of Palestinian Walks and Where the Line Is Drawn

Massoud Hayoun is a journalist based in Los Angeles, most recently freelancing for Al Jazeera English and Anthony Bourdain’s Parts Unknown online while writing a weekly column on foreign affairs for Pacific Standard. He previously worked as a reporter for Al Jazeera America, The Atlantic, Agence France-Presse, and the South China Morning Post and has been published widely. He speaks and works in five languages and won a 2015 EPPY Award. The author of When We Were Arabs: A Jewish Family’s Forgotten History (The New Press), he lives in Los Angeles.

When We Were Arabs: A Jewish Family's Forgotten History (Hardcover)